In the efforts to expand the use of methanol in the maritime sector, a European Commission-funded project seeks to explore the potential of recycling residual gases from steel plants to fuel ships. A first-of-its-kind demonstration was achieved when the RoPax ferry Stena Germanica traveled from Sweden to Germany powered by recycled methanol. Dubbed “Blue Methanol,” it is a recycled by-product of the steel production industry.

"It is exciting to be part of our sustainable journey and try out another new sustainable fuel,” said Peter Holm, Chief Engineer on the Stena Germanica. “I can confirm that we sailed with the new fuel from Gothenburg to Kiel on June 22, and it worked very well.”

While methanol is a fossil fuel, it is much cleaner than traditional marine fuel. Sulfur and particulates are reduced by 90 percent and nitrogen by 60 percent. The FReSMe project (From Residual Steel gasses to Methanol), funded by the H2020 EU program, aims to demonstrate the process that enables CO2 captured from the steel industry to produce methanol from CO2 recovered from the blast furnace gas of an industrial steelmaking plant, and H2 recovered either from the blast furnace gas or produced by electrolysis. The resulting methanol will be used as fuel for ships. 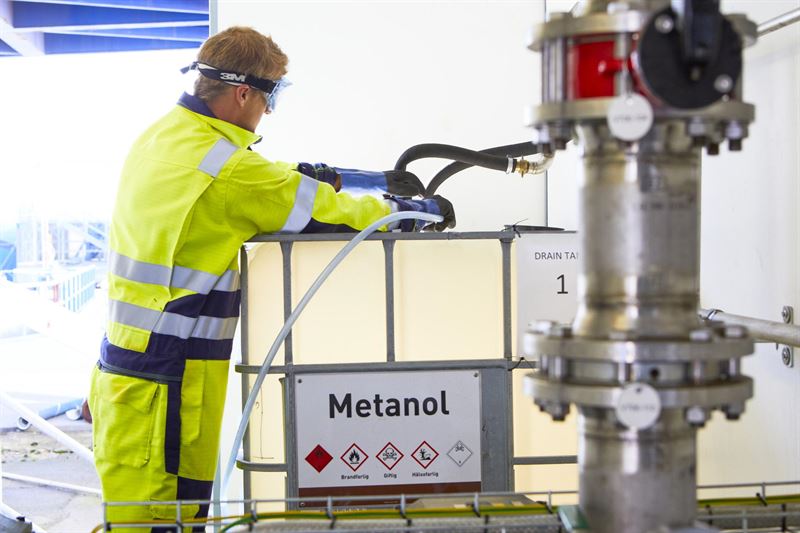 “This collaboration between the steel and the maritime sectors is the first of its kind and demonstrates that by working together companies from different backgrounds can greatly improve their impact on the climate. For Stena Line, this is another successful proof of concept for our methanol conversion ferry and a further bridge towards our aim of fossil-free shipping,” says Erik Lewenhaupt, Head of Sustainability for Stena Line Group.

In 2015, Stena Line made history by converting one of the largest ferries in the world, the 787-foot-long Stena Germanica to become the world’s first methanol powered ferry. The dual-fuel system onboard Stena Germanica permits the vessel to run on both methanol and diesel fuel. Stena Line developed it with several partners, including Methanex, Wärtsilä, and EU's Motorways of the Seas project.

This effort comes as more companies in the shipping industry are exploring the use of methanol to reduce emissions. Container shipping giant Maersk has said it plans to run its first vessel on methanol by 2023, while CMA CGM has also expressed interest in exploring methanol. The Port of Antwerp also reported that it is converting a tug to operate on methanol as a demonstration for harbor and inland operations.