The demolition yards at Alang, India received a record number of cruise and passenger ships in the past 12 months. While none of the major cruise brands have sent one of their ships directly to the ship breaking operations in India, several notable ships have arrived since November 2020 with more expected.

“One or two passenger ships get beached at Alang each year,” Captain Rakesh Mishra, a port officer at Alang explained to the Indian Express news outlet. “However, cruise ships came in large numbers during the last 12 months.” He said that it was the highest number of passenger ships to arrive at Alang in a single year.

The largest of the arrivals was the Karnika, which was the one cruise ship operated by an Indian start-up that failed during the pandemic. Built by Fincantieri, the 69,845 gross ton cruise ship was introduced in 1990 as the Crown Princess of Princess Cruises. Designed by famed architect Renzo Piano she was in the 1990s one of the largest cruise ships yet built with a design that was said to be inspired by a dolphin. She spent the last decade of her career cruising from Australia for P&O as the Pacific Jewel before being sold in 2019 to Jalesh Cruises for the short-lived Indian cruises.

Karnika well underway at the yards in Alang (Bharat Dihora)

Among the other well-known cruise ships that ended up at Alang this past year due to the bankruptcies of their operators was the Columbus, which was introduced in 1989 also for Princess Cruises as the Star Princess. She was the last cruise ship built for industry pioneer Sitmar Cruises but was operating for the UK-based Cruise & Maritime Voyages, which collapsed during the pandemic.

Two other cruise ships from the CMV fleet also arrived at Alang after being sold at auction. The Marco Polo had started her career built in 1965 as Alexandr Pushkin, the flagship of the Soviet fleet. Rebuilt as a modern cruise ship, she had developed a loyal following becoming one of the oldest cruise ships in service. The other CMV ship was the Magellan that had been marketed as a “superliner” when she entered service in 1985 as the Holiday for Carnival Cruise Line.

Several of the firms were either downsizing their operations or replacing older ships with newer tonnage. Bahamas Paradise Cruise Line sold its vintage ship the Grand Celebration, which had been built for Carnival Cruise Line in 1987, reducing its fleet to one cruise ship. Japan’s Peace Boat modernized its operation selling the 1982 vintage Ocean Dream to the breakers in Alang. The ship had begun her career as the Tropicale, the first newly built cruise ship for Carnival Cruise Line. The German cruise ship, the Albatros, built in 1973 as the Royal Viking Sea, also beached at Alang in July.

One of the pioneers of the modern cruise industry was also sold for scrap. Ending her career as a casino ship, the Leisure World had been built in 1969 as the Skyward for Norwegian Caribbean Lines (NCL). She arrived in Alang in July 2021 followed a month later by another casino ship the Amusement World, which had been built in 1967 as a Swedish ferry, as their Malaysian operator updated with a newer ship. 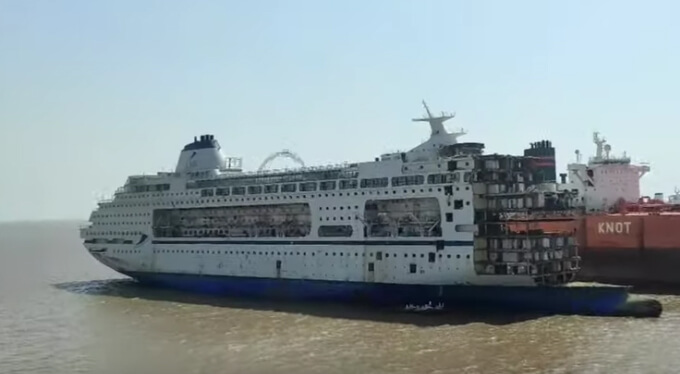 The strong demand for steel was another factor contributing to the influx of old cruise ships. Haresh Parmar of the Ship Recycling Industries Association, however, explained that cruise ships contain less steel versus the cargo ships and tankers arriving at Alang. As such, the passenger ships generally receive lower prices, but he highlights that because many of the ships arriving this year are coming from bankruptcy situations, they are arriving still stocked with valuable spare parts. Normally, he noted, an operator will take spare parts and even some of the furnishings before scraping a passenger ship.

The year ends with speculation on which other classic cruise ships are likely to arrive at the scrapyards. Chinese buyers bought Carnival Cruise Line’s Carnival Fascination, which was built in 1994 as part of the Fantasy class. It was rumored the new owner planned to use her as an accommodation ship. Recently, she moved to the anchorage at Colombo, Sri Lanka which has often been a last stop before arriving at Alang. The ship’s name on her AIS signal was recently changed from Century Harmony to a shorter Y Harmony.

Another ship that was also sold from the Carnival fleet, the Costa neoRomantica, never entered service for her new owners Louis Group’s Celestyal Cruises. She was sold this summer when the new owners needed to raise additional capital. She recently departed Greece reportedly bound for China with an interim stop in Dubai while brokers report that they believe the ship which was built in 1993 has also been sold for scrap.

There is also speculation about the fleet of cruise ships purchased by Seajet, a Greek ferry operator. It currently has three 1990s vintage ships built by Fincantieri for Holland America Line, a larger cruise ship also built in the 1990s for Princess Cruises, and the former Majesty of the Sea acquired from Royal Caribbean. All of these ships are idle in Greece while the company seeks a possible charter or buyer.

While the cruise industry is now recovering from the extended pause in operations, the pandemic became an accelerator sending many older cruise ships to the breakers. As the industry stabilizes the pace of scrapping is likely to return to the more traditional level of just a few passenger ships each year.