Multiple security services are reporting what may have been an opportunist approach and attempted boarding of a racing sailboat sailing near the coast of Yemen. While both the UKMTO and MICA Centre reported that a vessel was attacked while in transit 33 nautical miles southwest of Al Hudaydah, Yemen, the full nature of the incident remains unclear.

Analysts from Dryad Global are identifying the vessel as a well-known racing trimaran named Lakota. Between 1993 and 2000, the 60-foot vessel under the command of skipper Steve Fossett broke 12 records. The vessel was listed for sale with prices ranging from approximately $250,000 to over $300,000 before being reported sold earlier this year. The Associated Press said that famed French yachtsman Philippe Poupon acquired the trimaran and planned to sail around the world. The vessel is normally operated by a crew of up to five people. It is currently registered in Hong Kong.

After leaving the Philippines earlier this year it was believed to be heading for the Mediterranean. Dryad tracked the vessel to Port of Djibouti last weekend and reports today that it was near or in Yemini waters. They believe the AIS signal was off, possibly seeking to avoid pirates or other hostile forces in the area but it was unclear why the vessel might have been close to Yemen. Despite a current fragile cease-fire the area remains heavily disputed with other reports of approaches.

The EU monitoring in the area is reporting that three ships carrying militants in civilian clothes chased the vessel and were attempting to board the trimaran. Some reports said that one of the individuals made it aboard the vessel but was either chased overboard or jumped back into the ocean when he realized he had become separated from the others.

A spokesman for the EU force in the region told the Associated Press that the three boats fired upon the sailing ship. They estimated that 20 warning shots were fired and said that the people in the skiffs displayed assault rifles and the rocket-propelled grenade launchers. 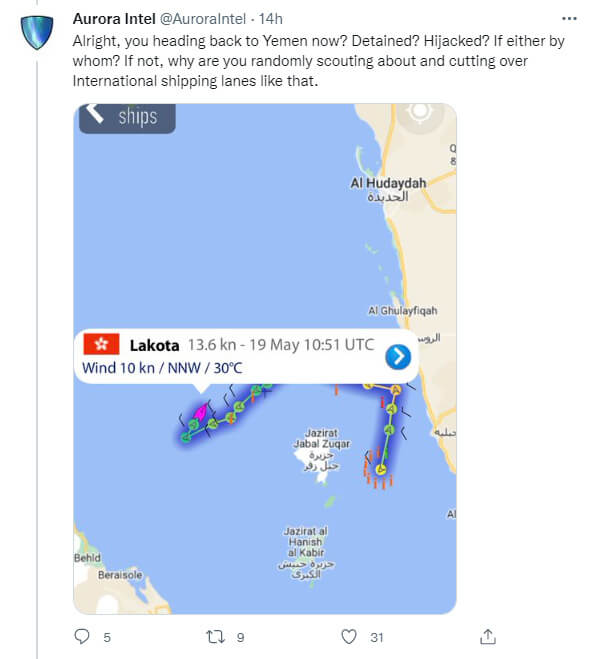 “Whilst details regarding the specific nature of the incident remain unclear, it is unlikely that the vessel was targeted as a result of an established and persistent piracy threat,” wrote Dryad Global while noting that vessels should be avoiding the area due to the extended war risk emanating from the conflict in Yemen. “Incidents within the area have historically been recorded as suspicious approaches with a number of vessels detained by either Yemeni coastguard, SLC forces, or in some instances Houthi rebels. It is important to note that the situation remains unclear, with questions existing around the provenance of the vessel and its intentions in transiting such an area. It remains a realistic possibility that the vessel was attacked as a result of an opportunistic attempt against a vulnerable vessel or was approached by Houthi forces known to be operating within the area.”

EU officials indicated that the Lakota appeared to escape after the approaches unharmed. A European Union naval force later reached the Lakota flying from the Italian frigate Carlo Bergamini. The EU force said the crew was safe.