U.S. Customs and Border Protection reports that it has set a new record for the seizure of counterfeit products arriving through the ports of Los Angeles and Long Beach. Nationwide they are cautioning that seizures were up 152 percent in the government’s fiscal year warning consumers to be aware of the dangers of counterfeit products sold by illegitimate sources over the internet and in underground outlets.

Donald Kusser, CBP Port Director of the LA/Long Beach Seaport, announced the record-breaking $1 billion worth of counterfeit products seized in less than a year at the twin ports. According to CBP, the new record, achieved as of September 15, marks an increase of 38 percent from just over $725 million of counterfeit goods seized in the fiscal year 2021. Kusser said the most pirated items included wearing apparel, accessories, handbags, wallets, footwear, watches, jewelry, and consumer electronics.

Nationwide CBP reports an increase of 152 percent year-over-year in the retail value of goods seized in FY 2021 (ended September 30, 2022). CBP made over 27,000 seizures with an estimated manufacturer’s suggested retail price of over $3.3 billion.

“CBP commits substantial resources in intercepting and seizing products that infringe intellectual property rights such as trademarks, copyrights, and patents,” said Carlos C. Martel, Director of Field Operations in Los Angeles. “These historic records show that smugglers exploited the increased demand for products via e-commerce and other sources.” 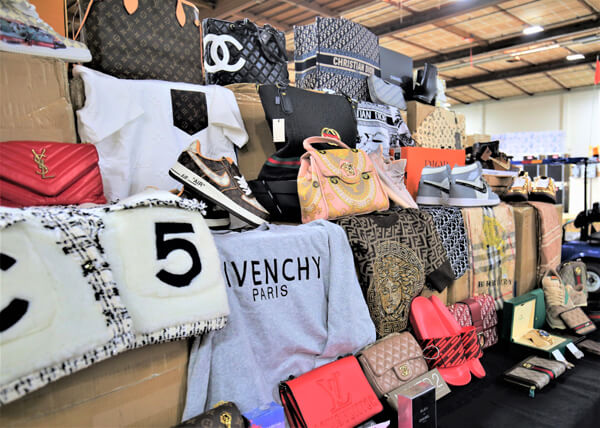 Sampling of good seized at the ports (CBP)

Historically, CBP reports illegal actors have sold counterfeit products on illegitimate websites and in underground outlets. However, the rise of e-commerce offers a haven for criminals who are now able to hide behind seemingly legitimate listings on well-known websites. The sale of counterfeit commodities multiplies the illegal profits of smugglers and traffickers who reinvest the proceeds from such sales into further criminal enterprises and activities.

It is illegal to purchase counterfeit goods. Bringing them into the United States may result in civil or criminal penalties, and purchasing counterfeit goods often supports criminal activities, such as forced labor or human trafficking according to CBP.

Displaying a sampling of the goods seized at the ports, they pointed out that counterfeit apparel, footwear, and handbags are often of inferior quality and may feature poor or uneven stitching, fragile fabrics, and improperly sized or designed logos. Peeling labels, low-quality ink, or printing errors on the packaging are also signs that products may not be legitimate.

To deter the importation of illicit goods and protect U.S. consumers and businesses, CBP has developed a proactive, aggressive, and dynamic enforcement approach to Intellectual Property Right enforcement.