The final stage of preparation work is getting underway in Denmark preparing two vessels that will take part in a pilot project for the transport and storage of CO2 in the North Sea. The vessels, a platform supply vessel and a jack-up rig, will lead a pilot project shipping liquid CO2 from Belgium to a portion of the North Sea in Denmark where it will be injected into the sandstone more than a mile below the seabed.

The PSV Aurora Storm, owned by Aurora Offshore, arrived in Esbjerg, Denmark on November 20 to begin conversion for her role in the pilot project for Project Greensand. Built in 2015 and registered in Norway, the vessel is a typical offshore vessel used for the oil and gas industry. She is approximately 274 feet long and 4,500 dwt with nearly 9,000 square feet of deck space. The vessel is being prepared by crews from Blue Water and Semco Maritime, two of the 23 organizations participating in the consortium behind Project Greensand. The PSV will transport containers of liquified CO2 that is being captured from the Ineos Oxide factory in Belgium to the Nini West platform in the North Sea.

"In the coming weeks, we will work intensively on rebuilding and upgrading Aurora Storm, so we can safely transport the containers of liquid CO2 from Belgium to the Danish part of the North Sea without any problems," said Søren G. Nielsen, Head of Chartering, Blue Water. “We will install a ‘grilling system’ on the vessel with the frame structure ensuring that the containers stay in their position on the vessel when we sail from Antwerp to the North Sea.”

The electrical systems on the Aurora Storm are also being upgraded as well as adding piping and pumps to the vessel enabling direct transmission of CO2 via the jack-up rig Noble Resolve from containers loaded on her deck. The CO2 will be transferred to the Nini West platform and then piped to the undersea sandstone reservoir. 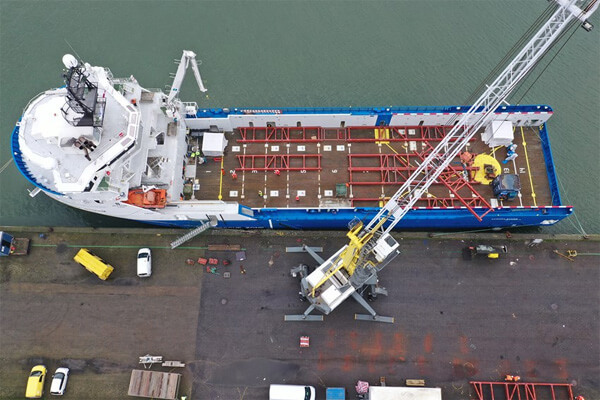 The Aurora Storm was selected for the project because like other PSVs she is outfitted with a dynamic positioning system that ensures the vessel can keep its position stable at sea, including under the difficult weather conditions that may arise in the North Sea. The vessel is berthed in Esbjerg for the next three to four weeks, after which the ship can sail towards Antwerp, where the containers with liquid CO2 are to be loaded. The first injection is expected around the end of 2022 or the beginning of 2023.

Intensive work is also being done to inspect, upgrade, and optimize the offshore rig Noble Resolve, which was recently acquired by Noble from Maersk. The 15,500 gross ton jack-up rig will be positioned in the Nini Field during the pilot project.

"We are excited that Aurora Storm and Noble Resolve have arrived in Esbjerg so that we can continue the work with Project Greensand," said Anders Benfeldt, Senior Vice President for Oil & Gas at Semco Maritime. “We have put intense work into designing and developing solutions for storing CO2 in the North Sea. We now enter the crucial phase where everything has to be installed before we can begin the work on the Nini field.”

Project Greensand, which is supported by the Danish state through the Energy Technology Development and Demonstration Program (EUDP), is currently in the pilot phase where the storage process is developed, tested, demonstrated, and monitored. Over the next three years, they plan to extend the storage area to the Nini Main field to expand the capacity to 1.5 million tons of CO2 annually. The CO2 will be transported on special ships that can carry more CO2 than the containers in the pilot project. Starting in 2030 they expect to have the capacity to handle 8 million tons of CO2 per year.