The first large cruise ship on a regularly scheduled trip was met by protestors when it docked in Key West, Florida on December 9. While several smaller cruise ships had previously visited the popular port, the arrival of the 92,250 gross ton Norwegian Dawn served as a rallying point for organizers that contend that the ships are too large and causing damage to the ecosystem.

The Key West Committee for Safer Cleaner Ships organized the protest reporting that 300 people turned out on the downtown pier holding signs and flags with slogans that included “No Big Ships,” “Stop the Silt,” and “Respect Our Vote.” In addition, the group reported that approximately 45 commercial and charter fishing boats along with private pleasure crafts carrying an estimated 100 persons lined the harbor also displaying the banners.

Organizers were careful to say that they were protesting the cruise ship and not the passengers aboard. They, however, continued their argument that the ships have gotten too large for the small community and are stirring up channel and seafloor causing extensive damage to the waters, fish, and coral.

“We are not done fighting this. We are far from done!” said Arlo Haskell, one of the group’s organizers, addressing the crowd. Haskell and the protestors with the signs “Respect Our Vote,” were calling attention to the fact that a year ago Key West residents overwhelmingly voted to limit the size of cruise ships and the number of people (crew and passengers) that could come ashore each day as well as calling for preference to be given to ships with the best environmental records. Florida Governor Ron DeSantis, however, signed into law a bill stopping local ordinances impacting the ports and most infuriating to the Key West groups included a retroactive provision, common in Florida, that overrode their previous vote. 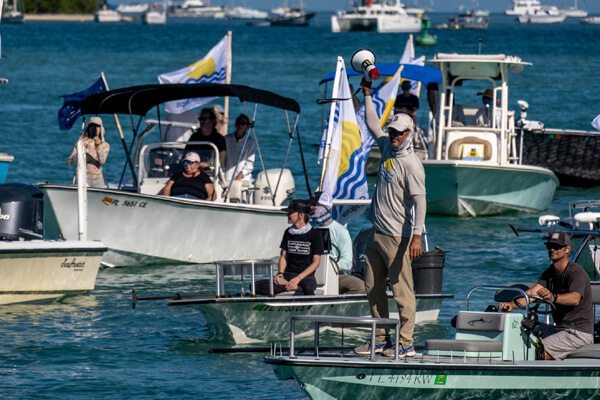 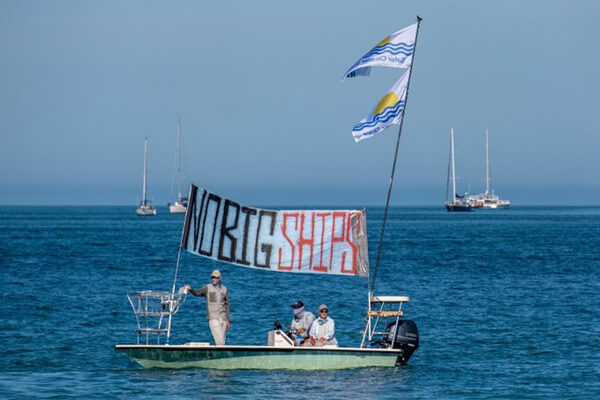 The U.S. Coast Guard agreed with the organizers areas for the small boats to gather but had boats out to prevent them from interfering with the 958-foot long cruise ship. The group, however, noted that the cruise ship appeared to arrive at a slower than normal speed, possibly advised by the Florida Harbor Pilots, in an attempt to reduce the amount of silt stirred up.

The cruise ship docked at a privately-owned pier where members of the business community, chamber of commerce, and tourist industry, displayed signs welcoming the cruise ship back to Key West. There were reports that the business owners even wanted to pass out pieces of Key Lime pie to make the passengers and crew feel welcome. They emphasized the importance of tourists and cruise ship passengers to the local economy.

Tourism officials reported that in 2019, cruise ships brought nearly one million visitors to Key West. The Norwegian Dawn was on her first cruise after returning to service having departed from Tampa, Florida. She reportedly was carrying just over 1,000 passengers, just under half her normal capacity as well as a crew numbering more than 1,000. Recently smaller cruise ships, the Azamara Quest and Crystal Serenity, had also made scheduled stops in Key West making the reopening of the port.

The Key West City Commission scheduled a special meeting for next week to discuss the issue of the cruise ships and what efforts could be taken to manage the return of the large ships in light of Governor DeSantis’ actions. In the meantime, protestors and advocates are gearing up for new rounds of debate as the cruise industry ramps up operations from Florida and in the Caribbean during the current winter season.