Ports of Auckland in New Zealand has signed a contract with Damen Shipyards to buy the world's first full-size, fully electric port tug.

The new 24.7-meter tug, a Damen RSD-E Tug 2513, to be delivered in 2021, will have a 70 tonne bollard pull, the same as the port's strongest diesel tug Hauraki, also built by Damen. She will be able to do three to four shipping moves on a full charge, or around three to four hours work. A fast charge will take about two hours.

The charging station is based on technology that is already deployed in the automotive industry. A simple system, it features four cables on the vessel being connected to the station. Once connected, the 1.5MW charger takes just two hours to fully charge RSD-E Tug 2513.

The tug has high levels of redundancy in its power systems. The electrical system has built-in redundancy, with the batteries arranged in strings; if one battery in a string fails, the others carry on the work.

To ensure absolute safety the tug also has two 1,000kW generator sets. They provide enough power for the tug to operate at 40 tonnes bollard pull in the event of an electrical system failure or if the vessel needs to operate beyond its battery capacity.

However, this is not a hybrid system. In normal operation, the generators will not be used, as the vessel and its battery system has been designed to meet the port’s normal operational needs. 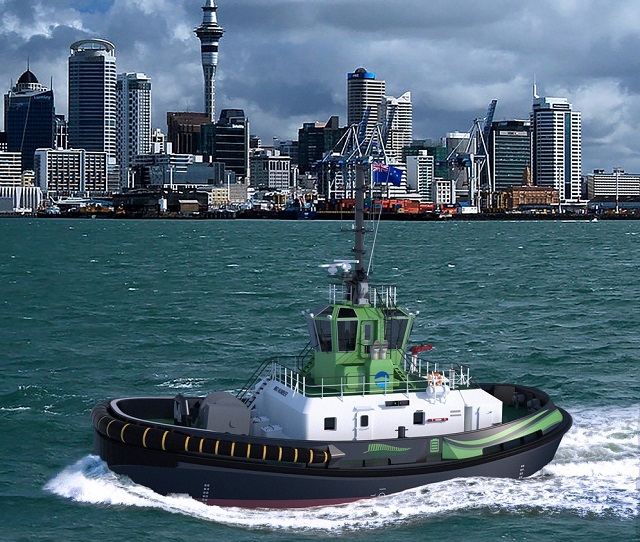 "In 2016 we set ourselves the goal of being zero emission by 2040," says Tony Gibson, CEO of Ports of Auckland. "We set this goal because we recognize that urgent action is needed on climate change, and we wanted to be part of the solution. However, setting that goal created a tough challenge. We have a lot of heavy equipment, like tugs, and in 2016 there were no zero emission options.

"I would like to acknowledge Damen for their work on this project since 2016. They have invested a significant amount of time and money to develop this innovative vessel. In the fight against climate change, partnerships are important, and Damen have been a great partner," he added.

Damen design and proposal engineer Tugs Marc Baken said: “We looked into the request, and we saw that it was technically possible. The next step was to consider the feasibility of full electrical operation from a business perspective. For this, Damen took data from the operational performance of Ports of Auckland’s existing ASD Tug 2411 and was able to work out what the battery requirements would be for the RSD-E Tug 2513.”

There is an electric tug under construction for use in Turkey, but it is small (18.7 meters), is designed with a conventional twin screw propulsion line (as opposed to the Azimuth propulsion in the RSD-E 2513) and will work in a limited operational environment.

Around 40 percent of primary energy generated in New Zealand comes from renewable sources, including 80 percent of electricity, which comes primarily from hydropower and geothermal power.