Located at the northwest corner of Dodge Island, the terminal was uniquely designed for Virgin Voyages but also represents an expansion for the port. The slip on the western end of the island had gone largely unused for many years, but with the addition of a new extension provides the port with an additional berth for cruise ships. For visitors to the terminal, it has skyline views of downtown Miami and Biscayne Bay.

“Coming to this beautiful new terminal and seeing Scarlet Lady in her home port here in Miami has been such an incredible experience,” said Richard Branson. “The team at Virgin Voyages has created a stunning building that delivers on our commitment to being better stewards of the earth with its LEED Gold Certification.” The materials, air conditioning, and electrical systems were all selected to minimize the terminal’s environmental impact earning it the LEED certificate.

The geometric design seeks to capture the feeling of a palm grove where land meets the sea and was inspired by Miami’s iconic palm trees and the area’s history as a place where coconuts were once harvested. Architecture and design firm Arquitectonica, which previously worked on the American Airlines Arena in Downtown Miami, Brickell City Center Complex in Brickell, and the Miami City Ballet in South Beach developed the design for the new terminal. Having also worked on the interior design of Virgin’s cruise ships, the firm also included elements of mid-century design, with jewel tones accenting throughout the terminal. The space also features local artwork by the nonprofit organization, Art in Public Places. 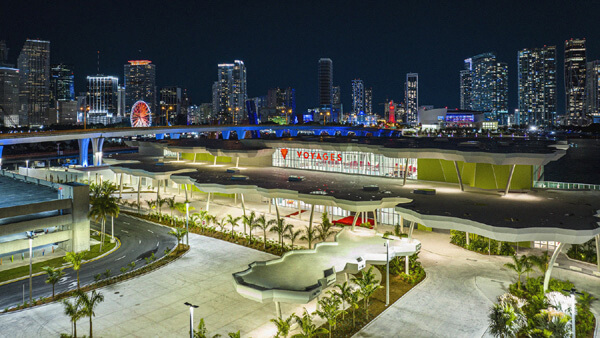 Among the amenities for passengers who will be embarking and disembarking from the Scarlet Lady cruise ship, there is an outdoor terrace to enjoy the sea breeze while waiting for embarkation. In addition to the normal elements of drop-off zones, areas for ride-sharing, and provisioning of the ship, the new terminal also features a dedicated entrance, expedited security screening, and an exclusive pre-boarding lounge for passengers that booked accommodation in the cruise ship’s suites. The terminal also has a dedicated crew-only lounge for those working on the ship.

At PortMiami terminals are all designated with letters and the new terminal has been named Terminal V for Virgin. In addition, the street address was modified to 718 N Cruise Boulevard, a clever celebration of Richard Branson’s July 18 birthday.

The Scarlet Lady will call Terminal V her year-round home and during the winter of 2022-2023, Virgin has also announced plans for a second one of its cruise ships, the Valiant Lady, to also sail Caribbean cruises from PortMiami.

The new terminal becomes the third dedicated new construction at PortMiami for individual cruise lines. Royal Caribbean Group and Norwegian Cruise Line both built dedicated terminals at the port. PortMiami has also begun work on renovating one of the older terminals for Carnival Cruise Line, and they plan to add additional berthing space for two more cruise ships with a larger terminal being built for MSC Cruises at the northeastern side of Dodge Island. 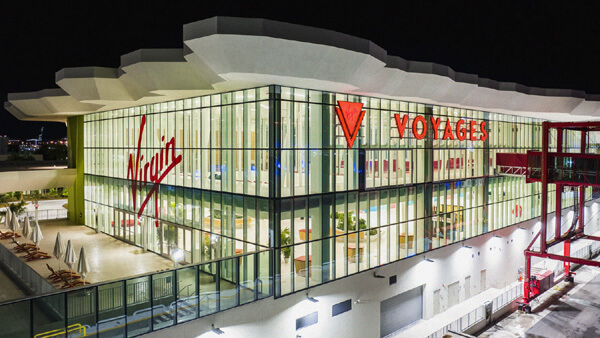