The Port of Vancouver, Canada’s largest port and the primary gateway for imports and exports on Canada’s West Coast, is struggling to recover after six days of disruptions due to devastating wildfires that blanketed the city in dense smoke and damaged the primary rail lines. Major shipping companies serving the port are warning customers to expect delays while the rail lines, terminal operators, and port officials are implementing a start-up plan to alleviate the backlogs.

The problem began on July 2 with the wildfires impacting the indigenous communities in western Canada, destroying the village of Lytton in British Columbia, and leaving two people dead. The smoke and fire impacted the main rail lines uses by the Canadian National Railway and Canadian Pacific Railway passing through the region, causing damage to the tracks and in the case of CN a critical bridge along the line.

Crews were able to access the lines that were impacted on July 6 and CP was able to resume service on its line. Service however remains suspended on CN’s mainline while it seeks permission from the indigenous community to access the area and works to determine the scope of repairs required. CN is in the meantime detouring a limited amount of traffic, possibly two trains a day, working with CP which is further complicated the congestion issues in the area. Hapag-Lloyd warned customers that CN “is not accepting exports or providing reservations at their inland rail ramps for westbound cargos.”

The suspension of train service rippled across the entire supply chain causing a backup of trains, cargo backing up in the port’s terminals, and a delay for ships seeking to arrive and depart from the port. Bloomberg is quoting experts that estimated about 4,000 rail cars remain along the corridor to the port of Vancouver.

“It is anticipated that regular flow in and out of the port of Vancouver will be impacted for at least one week,” Maersk wrote in a customer advisory on July 6. “We will see increased congestion at terminals and expect vessel delays.” Similarly, Hapag said customers may expect delays of 72 to 96 hours. 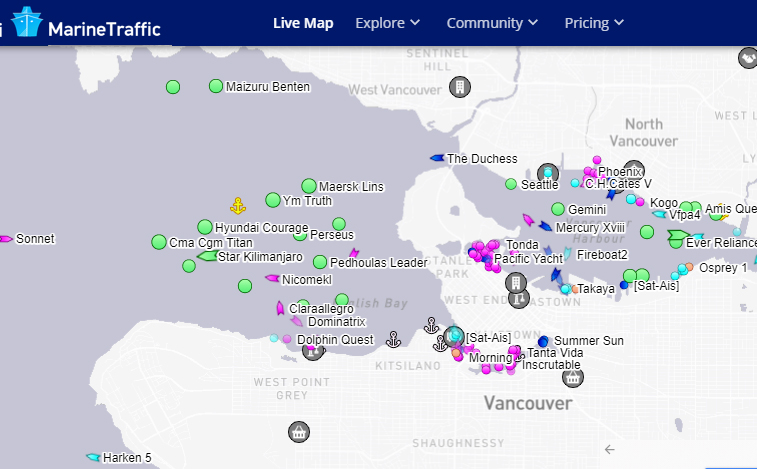 “Demand for large vessel anchorages continues to exceed capacity,” the Port of Vancouver advised customers. “All anchorage class assignments are experiencing heightened demand. The port’s dashboard reported today, July 8, that 25 vessels are at berth with an additional 34 vessels at anchor and four more due to arrive.

Responding to warnings from the port of the backlog and congestion, vessel operators are reportedly “slow steaming,” to delay the arrival of ships into the area. At least one vessel has also reportedly diverted to a secondary port.

It is hoped that the combination of rerouting and the resumption of train service will help the terminals to address the backlogs, but it could be at least a week before the system has caught up. Port officials are telling customers that they will continue to monitor the situation and provide updates on any new developments.