Reports that a vessel was put into quarantine at Durban, South Africa last week, again highlighted the challenges ports around the world are facing in combating the coronavirus. As one of sub-Saharan Africa’s largest and busiest port, Durban plays a vital role in the area’s economy.

Hapag-Lloyd recently confirmed reports that local authorities in Durban have ordered the 2824 TEU container vessel Montpellier to remain at anchorage for 14 days after two members of the crew tested positive for COVID-19. Deployed on Hapag’s Middle East India Africa Express (MIAX) service, the Montpellier arrived in Durban on May 13 from Reunion, an island in the Indian Ocean. With cargo operations suspended while the vessel is held in the anchorage, Hapag is being forced to adjust the schedule for berthing in Durban and the subsequent ports on the voyage.

While Hapag reported that it was the first incident of COVID-19 aboard one of the ships it operates, Durban has been challenged by the spread of the virus since March. A few days before the Montpellier was detained due to the virus, the local media in Durban was reporting that medical personnel had been dispatched to conduct COVID-19 tests on the crew of a bulker in the anchorage outside Durban.

In March, Durban also dealt with the return of MSC Cruises’ ship the MSC Orchestra, which had sailed from the port just prior to the global suspension of cruise operations. At first, the government discussed quarantining the passengers but instead let them disembark after a health screening.

Durban’s Minister of Health confirmed nearly two-weeks later that two of the more than 2,800 passengers tested positive for COVID-19, launching a contact tracing effort in South Africa but MSC Cruises said none of the crew showed any flu-like symptoms. The crew was moved to shore, with some having extended stays in Durban hotels before they could be repatriated. 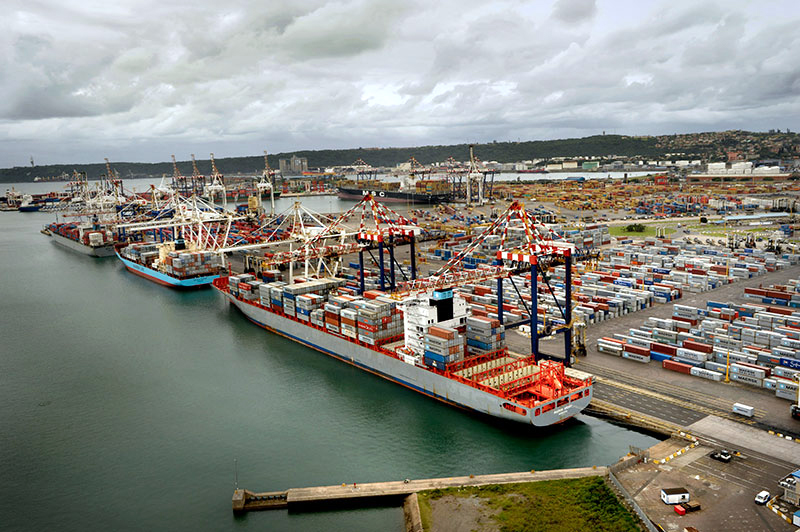 With its ranking in the shipping industry being challenged by competitors in the region, Durban now faces the further challenge of managing operations during the COVID-19 crisis. The port was already working to deal with heavy congestion when the virus reached South Africa with the first clusters in Johannesburg and Durban.

South Africa now has over 23,000 confirmed cases of COVID-19, with the largest cluster being in the Cape Town area.

Cargo operations were briefly impacted in late March and early April with a total lockdown except for essential cargo when South Africa enacted its first measures to contain the virus. The regulations were quickly relaxed with the government saying the rules did not apply to the “transportation of cargo from ports of entry to their intended destination, on condition that necessary precautions have been taken to sanitize and disinfect such cargo.”

In recent days, however the local newspaper The Mercury is reporting the Port of Durban is struggling with heavy congestion and a backlog of cargo in the terminals, while with ships blanking sailings the number of empty containers is on the increase on the docks. The virus is compounding the port’s operating inefficiencies while a task force of local businesses is seeking ways to improve traffic flows and operations in the port.

With more than 30 cargo ships and tankers reported in port and others awaiting entry into Durban, the shipping lines are dependent on the port maintaining operations despite the challenges of the coronavirus and continuing the flow of goods through the region.