The new polar research ship, the RRS Sir David Attenborough, left the Liverpool cruise terminal on November 3 to begin technical trials as the last step in the vessel’s commissioning. The much celebrated, and sometimes on the receiving end of a joke, state-of-the-art vessel has been billed as a critical component for research and understanding of global climate change.

The vessel which cost $260 million to build departed the Cammell Laird shipyard in late October to prepare for her sea trials. It marked the culmination of four years of construction starting with the keel laying in October 2016 and her launch in July 2018. She will replace two older vessels.

To create public interest and support for the project, a national competition was run to name the vessel. Much to the dismay of the organizers, a third of votes, over 124,000, came in for the name Boaty McBoatface. Instead, she was named for the world-renown naturalist Sir David Attenborough in a royal naming ceremony, although the name had scored less than three percent of the vote. The operators promised to use Boaty McBoatface as the name of one of the ship’s high-tech remotely operated sub-sea vehicles. 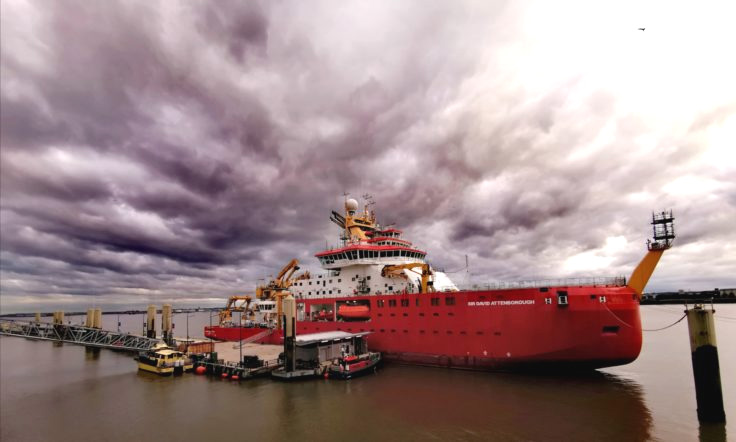 Plans for this week’s start of sea trials were delayed by bad weather, winds, and rain leading to further scorn in the tabloid media saying the vessel “did not go to sea because of a breeze.” The organizers responded explaining that, “the ship and crew were held at the terminal for a few days due to a storm off the west coast. Although the ship will be capable of sailing through rough conditions in the Southern Ocean, her sophisticated power management and stabilization systems require several days in calm seas to balance and optimize performance.”

During the next two weeks, engineers from Cammell Laird and British Antarctic Survey (BAS) will be performing operational checks on the propulsion, steering, engineering, and navigation systems. Once completing the trials, the vessel will then be formally handed over the ship to the Natural Environment Research Council (NERC).

A team from BAS is then scheduled to spend 50 days of intensive training at Holyhead Port before embarking on operational and scientific equipment trials around the Irish Sea. The team will test anchoring, maneuvering, dynamic positioning, and helideck landing. Early next year the ship will undertake ice trials in the Arctic, and in November 2021 make its maiden voyage to Antarctica.

According to BAS, the vessel was designed as a multidisciplinary research platform that will transform how shipborne science is conducted in the polar regions and provide scientists with state-of-the-art facilities to research the oceans, seafloor, ice and atmosphere. It is being outfitted with a wide range of specialist scientific facilities, instruments and laboratories as well as marine robotics and remotely operated vehicles. She is also the first British polar research ship to feature a moon pool – a vertical shaft running through the vessel, open to both the air and sea – that can be used to deployed and recover sensitive equipment.