Just shy of three years since the first steel was cut and two years after assembly began, the first Great Lakes bulk carrier to be built in the U.S. in more than 35 years recently completed her first sea trials. The new U.S.-flagged laker is being built for Interlake Steamship Company and marks their first new vessel in more than 40 years.

The 639-foot-long Mark W. Barker, named for Interlake’s president and second-generation leader of the family-owned and operated company, departed the Fincantieri Bay Shipbuilding facility in Sturgeon Bay, Wisconsin for the first time under her own power on July 1.

“This is the beginning of a process that has several stages. It’s the pretest to the test so to speak,” says Mark Barker, describing the process for his namesake vessel. “There are multiple stages where the vessel will depart and return to the shipyard so necessary adjustments can be made. This is a normal process to prepare for the U.S. Coast Guard sea trials and to ensure that the vessel is truly ready to go operational on the Lakes.”

Beyond her titles as the first new vessel, the 28,000 dwt vessel also incorporates forward-looking design elements to lower emissions from a high-efficiency propulsion plant as well as improved maneuverability and enhanced cargo solutions to meet customer demands. She was designed to carry all types of cargo throughout the freshwater lakes and river systems around the Great Lakes with special consideration to navigate the tight bends of the Cuyahoga River in Cleveland. 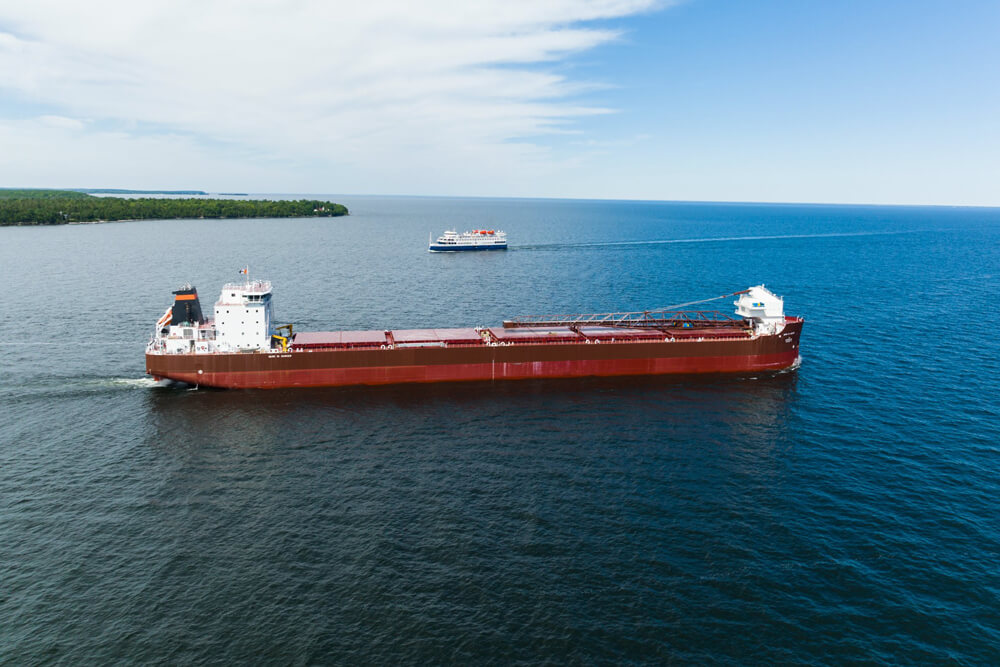 Her hull design was optimized for efficiency and all systems have been designed to ensure low energy consumption. A Kongsberg high-lift rudder optimizes the wake through the propeller and along with 1,000-hp bow and stern thrusters that increase the vessel’s maneuverability. She is powered by twin EMD main engines generating 8,000 total horsepower that turn a single four-blade, controllable-pitch propeller through a twin-input, single-output gearbox. The Mark W. Barker will be the first ship on the Great Lakes with engines that meet EPA Tier 4 emissions standards.

Another element of her design are improvements to the cargo hold arrangement along with cargo hatch covers designed for maximum cubic space and the ability to handle difficult cargoes. Five large hydraulically controlled stackable hatches will provide enhanced flexibility with project cargoes and expedite loading operations. The unloading boom is also located on the forward end of the ship, offering flexibility for cargo operations in congested ports,

Unlike most Great Lakes freighters, Interlake highlights that the Mark W. Barker also has a square-shaped, flat-bottomed cargo hold instead of a traditional V-shaped angled bottom that funnels bulk cargo onto conveyer belts for offloading. While her cargoes will include traditional raw materials such as salt, iron ore, and stone, the company also gave her the ability to handle non-free-flowing bulk material including the capability for cargoes such as wind-turbine blades.

The first section of her hull was towed from the dry dock at the end of 2020 when the laker was 70 percent complete to make way for vessels undergoing winter maintenance. The completed hull and structure for the ship was again floated in October 2021 to begin the final phase of her outfitting. Interlake is now anxiously anticipating the delivery of the vessel after she completes trials and receives her U.S. Coast Guard certifications. 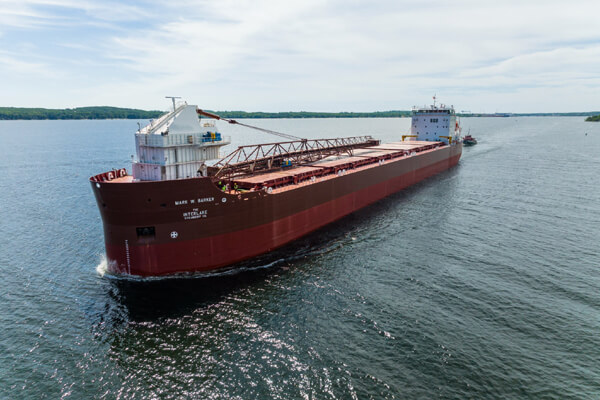 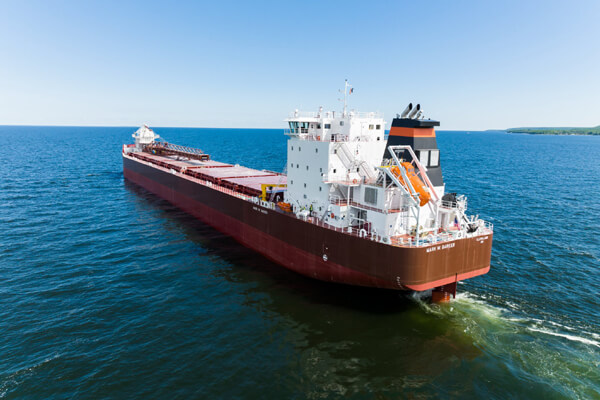