A fire aboard the harbor tour boat Spirit of Norfolk spread through the vessel and left it burned out above the main deck level, photos released by the U.S. Coast Guard on Wednesday show.

The Spirit of Norfolk caught fire on Tuesday afternoon while it was conducting a harbor tour for elementary school students just off Naval Station Norfolk. 108 people were on board the 190-foot vessel, including 89 school children. Passengers reported that the smoke and fire came from the direction of the engine room, and videos from the scene showed smoke emerging from the stern. To ensure the safety of the passengers, the crew moved them to the weather deck, and fireboats arrived shortly after to respond to the emergency.

A second excursion boat, the Victory Rover, was brought alongside and the passengers were transferred over safely. Two crewmembers remained aboard Spirit of Norfolk as she was towed to a pier at the naval base for a firefighting response. The station's own fire crews led the effort, which focused on hull cooling. The fire ultimately burned forward through the passenger compartments and up through the pilothouse, photos provided by the U.S. Coast Guard show. 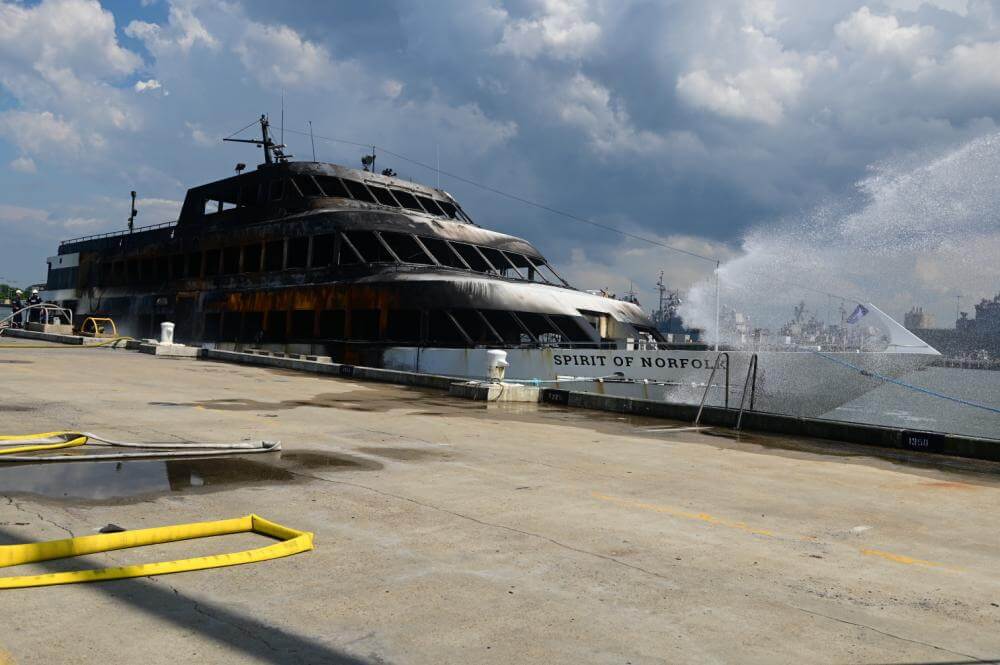 On Wednesday, response crews set up a dewatering pump to begin removing firefighting water from within the hull. The pumped-out water is being stored in tanks in order to address any possible contamination and prevent pollution, and a barge will arrive Thursday to provide additional tank volume.

No pollution has been reported, and the vessel and the area around it are under monitoring as response efforts continue. The vessel was still smoldering as of Wednesday evening, and fire crews remain on scene to respond to a reflash if needed.

The fire is under investigation by the U.S. Coast Guard and the NTSB, and officials plan to provide more information on Thursday.