U.S. Secretary of Energy Rick Perry has announced $18.5 million in new funding for an offshore wind research and development consortium that will conduct U.S.-specific research aimed at reducing the cost of offshore wind.

Worldwide, 13,000 megawatts of offshore wind has been deployed —yet the U.S. only has one offshore wind farm. The U.S. is capitalizing on momentum in the nascent offshore wind market, with the nation’s first commercial offshore wind project, the Block Island Wind Farm, and additional projects proposed along America’s coastlines. However, the U.S. has several specific challenges that require industry-wide collaboration to reduce costs including deep water requiring floating foundations.

For example, while most European installations to date have occurred in shallow waters, roughly 60 percent of U.S. offshore wind resources are situated in deep waters — more than 60 meters (200 feet). Traditional bottom-mounted foundations aren’t economically viable in these areas. Tethered to the sea floor, floating foundations allow wind turbines to operate in areas where water depths may be greater than 165 feet. Floating foundation technologies make offshore wind feasible in locations, including California (where nearly 95 percent of the available offshore wind resource has a depth greater than 60 meters), Hawaii, and Maine. 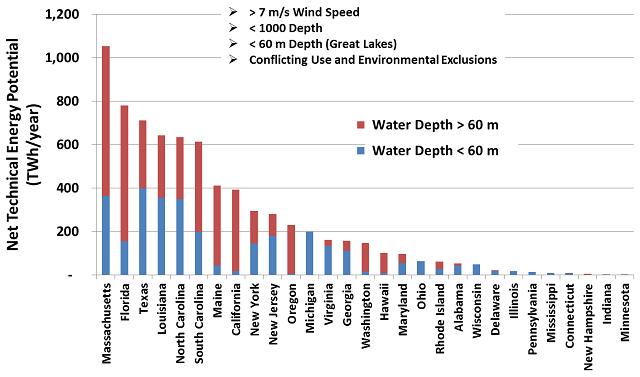 Floating foundation technology, largely adapted from the oil and gas industry, is already successful at the prototype stage, with more extensive test and demonstration projects underway. Currently, the most cost-effective installation method appears to be a “tow-out” concept, in which the foundation and turbine are constructed in port and then towed out to an anchor site.

The dynamic nature of wind turbines, along with the weight distribution needed to stay afloat, presents a number of engineering issues to overcome. A concept used by several floating offshore wind pilot projects to date is that of a semi-submersible platform, which has several cylinders filled with water, serving as ballast for stability. The University of Maine plans to use this type of platform for their Aqua Ventus I project, which is supported by the Department of Energy’s offshore wind demonstration program. Another floating foundation option is a “spar” concept, which relies on a large submerged mass to maintain stability. While floating technologies may have the potential to become more cost-effective than traditional bottom-mounted foundations in the long term, significant research is needed to reduce costs and to validate the engineering tools used to design and optimize floating foundations.

The Consortium will conduct research on floating foundations and other technical innovations. It will be a cooperative private-public innovation hub addressing topics including wind plant technology advancement, resource and physical site characterization, installation, operations and maintenance and supply chain technology solutions.

Under Perry's competitive funding opportunity announcement, the Department of Energy intends to select an administrator to coordinate the collaborative R&D activities conducted by the consortium. The consortium will include members of the offshore wind industry who will contribute funds to the consortium and use the research findings to further advance technologies. In addition to this $18.5 million funding opportunity announcement, $2 million will also be allocated to research at the Department of Energy’s national laboratories to support consortium R&D activities.