Orsted, the Danish energy company that has been aggressively pursuing offshore energy, announced new plans for one of the world’s largest renewable hydrogen plants. Know as SeaH2Land, the massive project envisions linking offshore wind power to create a hydrogen hub for the industrial cluster centered around the Dutch-Flemish North Sea Port.

The North Sea Port cluster is according to Orsted one of the largest production and demand centers of fossil hydrogen in Europe currently using 580,000 tons per year. Driven by decarbonization efforts, industrial demand in the cluster could grow to about one million tons by 2050, equivalent to roughly 10 GW of electrolysis. In addition to the broad industrial applications for hydrogen in the region, the North Sea Port, one of Europe’s largest shipping gateways, has the potential to become a large user of hydrogen as the marine fuel applications are developed.

Orsted proposes to connect the GW electrolyzer directly to a new 2 GW offshore wind farm in the North Sea. This will enable the large-scale supply of renewable electricity required for the production of renewable hydrogen and correlates with Dutch proposals to accelerate the roll-out of offshore wind projects to meet increasing electricity demand. The offshore wind farm could be built in one of the zones in the southern part of the Dutch exclusive economic zone that has already been designated for offshore wind development.

"The Dutch-Flemish North Sea Port covers one of the largest hydrogen clusters in Europe. As the world looks to decarbonize, it's paramount that we act now to secure the long-term competitiveness of European industry in a green economy,” said Martin Neubert, Chief Commercial Officer and Deputy Group CEO, Orsted. “The SeaH2Land project outlines a clear vision and roadmap for large-scale renewable hydrogen linked to new offshore wind capacity. With the right framework in place, the Netherlands and Belgium can leverage the nearly unlimited power of offshore wind to significantly advance renewable hydrogen as a true European industrial success story." 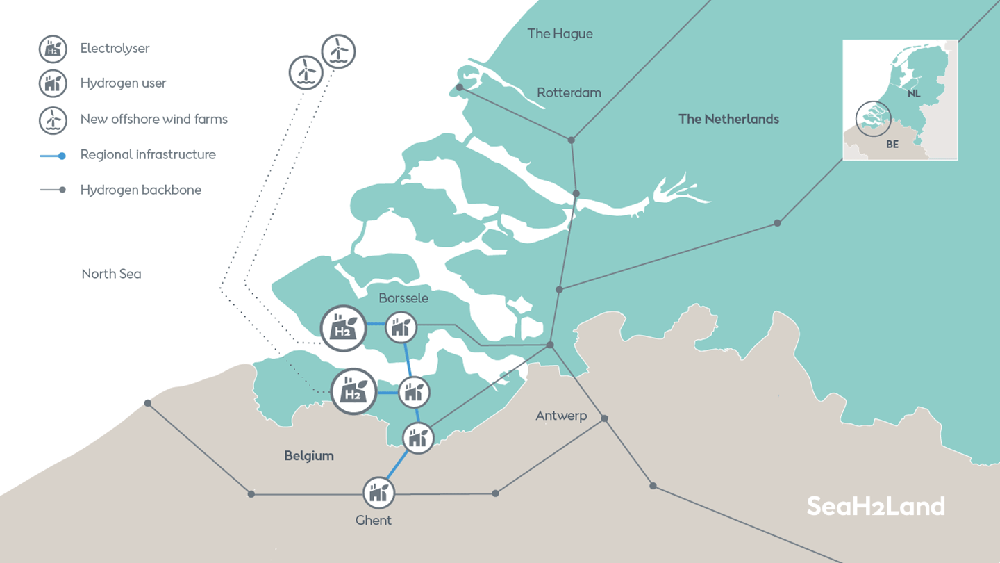 To achieve the regional hydrogen hub, the SeaH2Land project also proposed to link the electrolyzer to a regional pipeline system connecting large-scale consumption and production in the cluster. Yara, in consortium with Orsted, and Zeeland Refinery have each announced plans for mid-size renewable hydrogen production at their sites, while Dow has been exporting hydrogen to Yara since 2018 through the world's first conversion of a gas pipeline into hydrogen. The pipeline network could also be extended further south to ArcelorMittal and further north, underneath the river Scheldt, to Zeeland Refinery. The cluster strategy also proposes to extend the 380 kV high-voltage network for the electrification needs of the industry south of the river Scheldt.

Through the development of this network of links between the industrial locations with the electrolysis and offshore wind, landing it would be possible to create a true energy hub spanning both sides of the river and one of Europe’s largest industrial zones. They believe that this would create a unique regional ecosystem of hydrogen exchange with significant carbon reduction in the manufacturing processes of ammonia, chemicals, and steel and a significant contribution to the European Green Deal.

The major industrial companies in the region ArcelorMittal, Yara, Dow Benelux, and Zeeland Refinery, support the development of the required regional infrastructure. The partnership will now move forward and engage in dialogue with the regulatory authorities on the framework and policies needed to support the development of renewable hydrogen linked to large-scale offshore wind, the regional infrastructure, and conduct a full feasibility study of the project.