Oil & Gas UK has released its 2019 Economic Report Roadmap to 2035: A Blueprint for net-zero, highlighting a positive future for the industry as the nation moves towards "net-zero."

Chief Executive Deirdre Michie welcomes the U.K. government's aim to achieve net-zero greenhouse gas emissions by 2050, and 2045 in Scotland. “Oil and gas companies are already in action, using their skills, expertise and resources and developing their energy portfolios in ways that will help move the UK towards net-zero.”

She says the report demonstrates an industry in action with a credible plan for the future. “While we don't have all the answers to the big challenges we face, we have started work on what we know can be done.”

The report notes that the Committee on Climate Change (CCC) has outlined six areas of specific focus in the drive to a net-zero economy:
• Resource and energy efficiency
• Societal choices (e.g. less meat in diets)
• Extensive electrification
• Development of a hydrogen economy
• Development of carbon capture, usage and storage
• Changes in land use

The UK offshore oil and gas industry is taking action now to better assess and reduce the emissions from the production of hydrocarbons in the UK, states the report. It is also supporting the development of carbon mitigating technologies which offset emissions resulting from the use of oil and gas in the wider economy. In addition to this, both oil and gas producers and supply chain companies are increasingly diversifying their footprints to support the development of alternative, low- carbon energy sources. 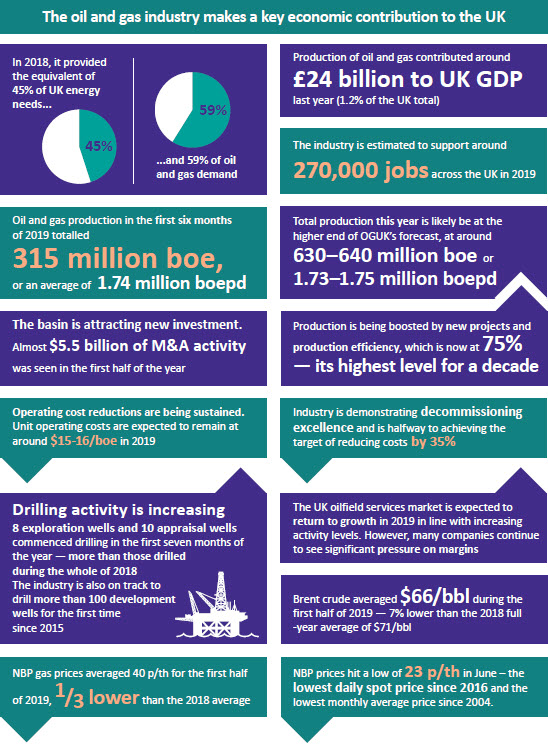 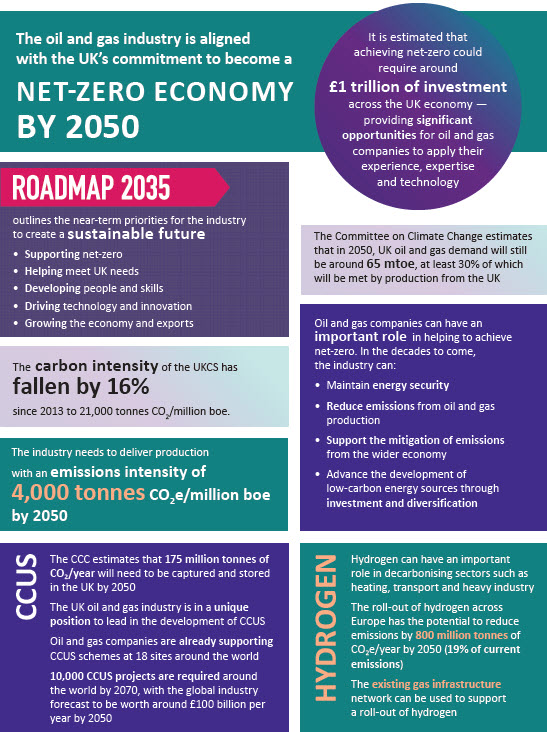 Offshore oil and gas production operations currently account for around three percent of the UK’s total greenhouse gas emissions, but Mitchie says the UK’s location and geology mean that it has a competitive advantage when it comes to large-scale emissions mitigation programs such as carbon capture, usage and storage.

The offshore oil and gas industry currently meets 45 percent of the UK’s overall energy needs and will continue to provide energy security for decades to come, she says. “Having an indigenous energy resource helps to ensure an energy supply we can control, regulate and access.” Production of domestic oil and gas directly accounts for around 1.2 percent of the UK’s GDP.

The UK sector is more competitive than it has been for many years with new investors attracted to the basin and almost $5.5 billion of assets changing hands so far this year. 18 exploration and appraisal wells have been drilled so far in 2019, more than 2018, and the basin is on track to drill over 100 development wells for the first time since 2015.

In addition, production is higher than it has been since 2011, and production efficiency at its greatest level for a decade. However, Mitchie notes that the sustainability of some companies remains fragile. OGUK has developed a new set of Supply Chain Principles with its members, which she anticipates will help ensure the ongoing sustainability of the basin.

Graham Hollis, senior partner for Deloitte in Aberdeen, said: “The oil & gas industry remains a vital part of the UK’s energy mix and with an estimated creation of 40,000 new jobs, a crucial economic asset.

“While the report highlights that the transition to a more diverse energy mix is successfully underway, there is still work to do. Increased renewables investment and innovation in new technologies have been instrumental in improving sustainability, but more cross sector collaboration is required not only to meet growing UK demand but to ensure that this need is met by domestic production.”