Ørsted has entered into an agreement with the D.E. Shaw Group to acquire a 100 percent equity interest in Rhode Island-based Deepwater Wind at a purchase price of $510 million.

The two companies’ offshore wind assets and organizations will be merged to become the group with most comprehensive geographic coverage and the largest pipeline of development capacity in the U.S.

•   Approximately 2.5GW of offshore wind development potential across three lease areas in Massachusetts and Delaware. Of this, 1.2GW is developed through an equal joint venture with PSEG, a New Jersey utility.

•   Development rights for up to 2GW at the Bay State Wind site off the coast of Massachusetts owned in a joint venture with Eversource.

•   Development rights for up to 3.5GW at the Ocean Wind site off the coast of New Jersey.

•   In Virginia, Ørsted will be constructing two 6MW wind turbine positions for phase one of Dominion Energy’s Coastal Virginia Offshore Wind Project. Ørsted has exclusive rights with Dominion Energy to discuss the potential development of up to 2GW of offshore wind capacity.

With the combined organization and asset portfolio, Ørsted will be able to deliver clean energy to the seven states on the U.S. East Coast that have already committed to build in total more than 10GW of offshore wind capacity by 2030.

After closing of the transaction, the name of the new organization will be Ørsted US Offshore Wind. The new organization will be represented by a local management team headed by Ørsted US Offshore Wind CEO Thomas Brostrøm, Co-CEO Jeff Grybowski, President and CFO David Hang both from the Deepwater Wind team, and COO Claus Bøjle Møller from the Ørsted team.

The transaction is subject to clearance by the U.S. competition authorities and is expected to close by end of 2018. 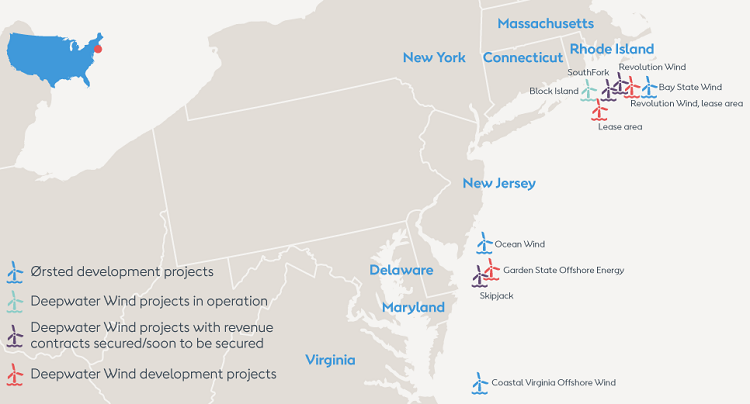 Deepwater Wind's development projects with revenue contracts awarded or under negotiation are:

Skipjack (120MW): located more than 19 miles from Ocean City, Maryland, Skipjack will interconnect into the Delmarva peninsula where it will deliver power to the residents of Maryland under the 20-year OREC order which was issued by the Maryland Public Service commission in 2017. Subject to permitting, further development, and final investment decision, Skipjack is expected to be commissioned by the end of 2022.

Southfork (90MW): located 35 miles east of Long Island, Southfork will interconnect into eastern Long Island where it will deliver power to households under a long-term power purchase agreement with the Long Island Power Authority. Subject to final investment decision, Southfork is expected to be commissioned by the end of 2022.

Garden State Offshore Energy: a 50-50 joint venture with PSEG, a leading New Jersey utility and power generation company, holds the rights to a lease off the coast of Delaware and New Jersey with the potential for approximately 1.2GW of offshore wind.

New England lease areas: Deepwater Wind holds the rights to two lease areas off the coast of New England which contain the potential for a further 1.3GW with close proximity to the growth markets in the North East.

In Virginia, Ørsted will be constructing two 6MW wind turbine positions for phase one of Dominion Energy’s Coastal Virginia Offshore Wind Project. The two companies have signed a memorandum of understanding giving Ørsted exclusive rights to discuss potential development of up to 2GW of offshore wind capacity.