Japanese shipping company Nippon Yusen Kabushiki Kaisha (NYK) reports that it is exploring a novel approach both to address the problems of waste produced aboard its ships as well as the efforts to increase recycling to reduce energy use through alternative forms of energy. The shipping line working with two Japanese companies is studying the process of converting organic waste materials aboard its vessels into fuel.

NYK is focusing on the challenge of dealing with the waste produced during a voyage and the opportunities for creating a more circular environment. They highlighted that waste generated on board is stored on the ship's deck and discharged at ports of call. Through the process of transport and incineration of the waste, the shipping line said CO2 is generated. They estimated that approximately 5,000 liters of waste, mainly plastic dust, is generated from a large LPG carrier (VLGC) for every 45-day voyage between Japan and the Middle East.

Working with Astomos Energy Corporation, a Japanese LNG imported and distributor with a coastal shipping operation, and Sustainable Energy Development Co., a Japanese biomass/energy conversion company, the companies will study the opportunities for waste-to-energy at sea. The three companies will proceed with a joint study targeting completion of the onboard demonstration test and implementation of Sustain Energy’s ISOP (integrated subcritical-water organic-waste power-generation) system on a vessel by the mid-2020s. 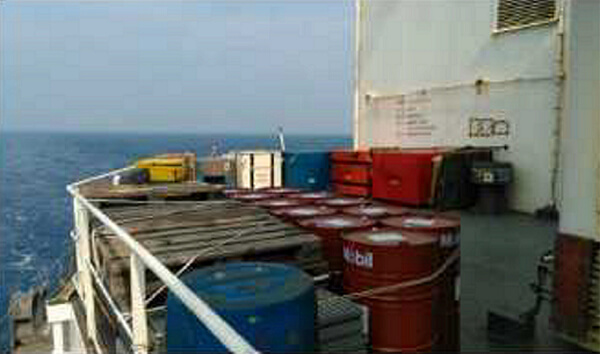 Wasted stored on deck for disposal at a port (NYK)

By installing ISOPs on ocean-going vessels, NYK expects that CO2 emissions from marine transportation as a whole will be reduced by utilizing the treated bio-components as energy. The company reports that the ISOP system can produce bio-coal or bio-coke as well yield methane gas.

An additional benefit would be reducing the stored waste on board the vessel. It would create additional space on the vessel and improve the working environment and sanitary conditions for seafarers.

NYK announced in August 2022 that it was investing in Sustainable Energy. At the time they announced plans to study the process for possible use on their ships.