The NTSB has released the results of its investigation into the collision of a moving train with the towboat Baxter Southern on the Upper Mississippi in late 2021, finding that the towboat's crew were not aware that they had temporarily berthed the bow of a barge over a rail line.

On November 13, 2021, the towboat Baxter Southern was downbound on the Mississippi, pushing four empty barges for a destination in Louisiana. At about 2200, the wind picked up with gusts of up to 35 knots, making navigation difficult for the 700-foot-long empty barge tow. The forecast showed that the winds would continue through the night. After consulting with the pilot, the master ruled out continuing onwards to the next lock or trying to turn around and head back upriver. Instead, they decided on a plan to push the barges up against a bank to wait for better weather conditions.

Using a non-ECDIS electronic chart system, they selected a site with a magenta dashed line around it where there were no trees or visible obstructions. They were aware that there was a rail line in the area but did not believe that it was a substantial risk. Because of the rough weather, no lookout was posted on the bow as they approached the bank.

At 2336, the barge tow's bow rake was pressed up against the bank, and the master left the bridge. Three crewmembers were sent forward to verify that the bow was not overhanging the track.

Before the deckhands reached the head of the tow, they saw the lights of an approaching train coming around the bend some 2,000 feet to the north.

At about 2342, the conductor and the engineer saw the barge tow and the towboat, but were not concerned; it was common to see barges pressed up against the bank in this area. Following protocol, they accelerated down a straight section of the track, heading towards the barge.

One minute later, when the locomotive was about 300 feet from impact, the engineer realized that the barge's bow was overhanging the rail bed, and he pulled the emergency brake. The pilot, who was still on the bridge of the towboat, saw what was happening and put the throttles in reverse to back off the bank - but too late to have an effect.

Nine seconds later, the left side of the lead locomotive struck the barge's bow and derailed. The second locomotive followed, along with ten hopper cars, including six which went into the river. The engineer and conductor sustained only minor injuries and escaped from the locomotive on their own; none of the crewmembers aboard the Baxter Southern were injured.

After the collision, the master of the Baxter Southern backed off the bank, contacted the Coast Guard and moved upriver to another berthing location. The lead barge had sustained minor denting and scraping with no impact to its structural integrity. 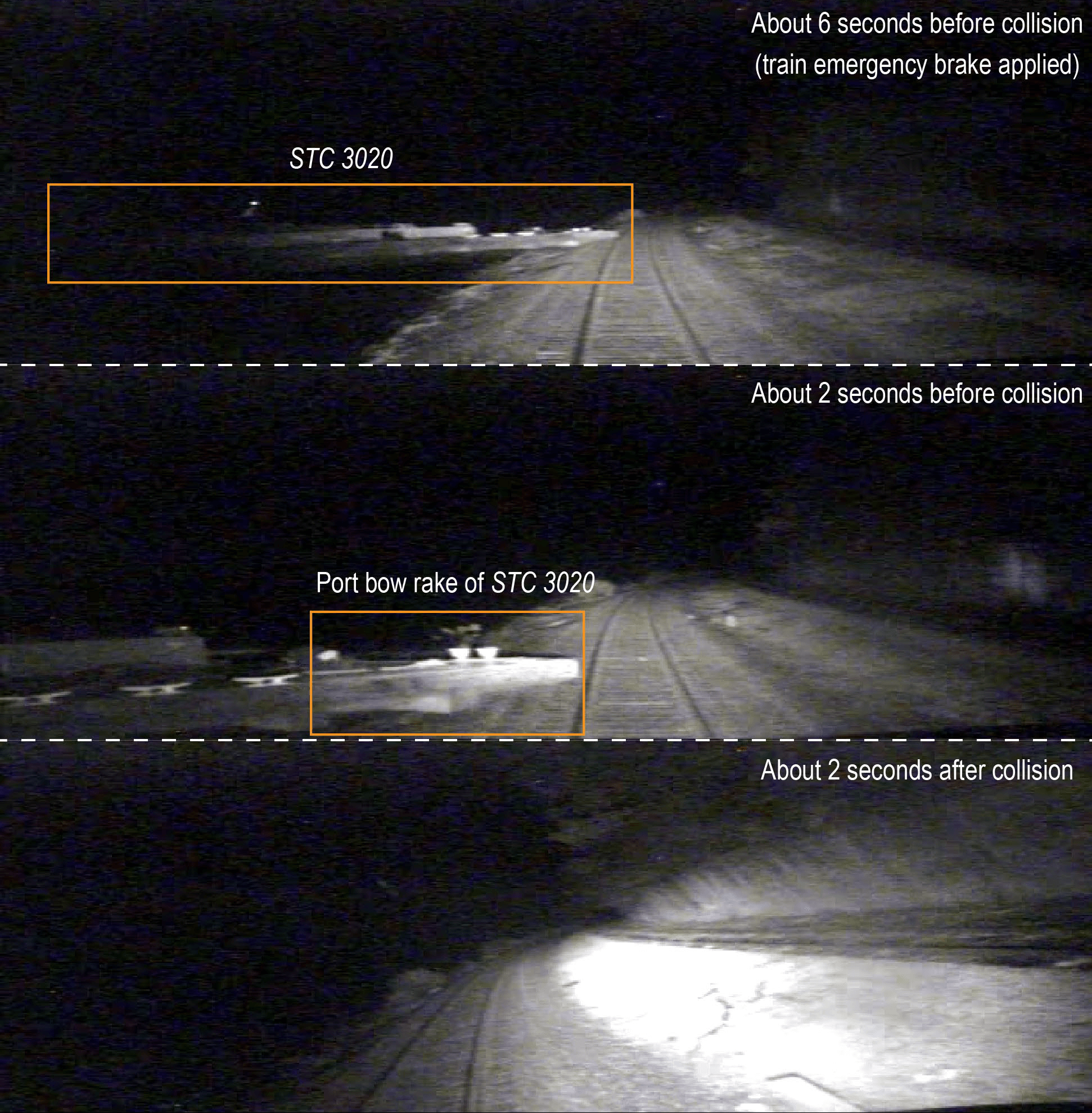 The master and pilot - who each had about 30 years of experience in the towing industry - told investigators that they had not seen the chart symbol with an exclamation point on their ECS chart overlaying the bank area. The symbol would have warned them of a "Barge/Rail Collision Risk" at the site if they had clicked on it. The pilot said he had previously used the same area to temporarily berth barges "probably half a dozen times," and past AIS data appeared to show that other operators had also used this location.

NTSB concluded that the cause of the casualty was "the tow’s pilot and captain not correctly identifying a caution area on the electronic chart," and it advised marineers and owners to ensure proficiency in the use of electronic chart systems.