On Tuesday, the National Transportation Safety Board released a transcript of the bridge audio recording from the con/ro El Faro's final voyage.

The long-awaited, 500-page transcript covers audio from the morning of her departure on September 30, 2015 through the master's order to abandon ship at 0729 the next day.

The NTSB and the U.S. Coast Guard are conducting an in-depth investigation into the sinking, which claimed the lives of all 33 mariners aboard. The transcript and related documents released this week will inform a third and final round of USCG hearings into the loss of the vessel.

A full edition of the transcript may be found here; the NTSB's summary and a link to related documents is available here. 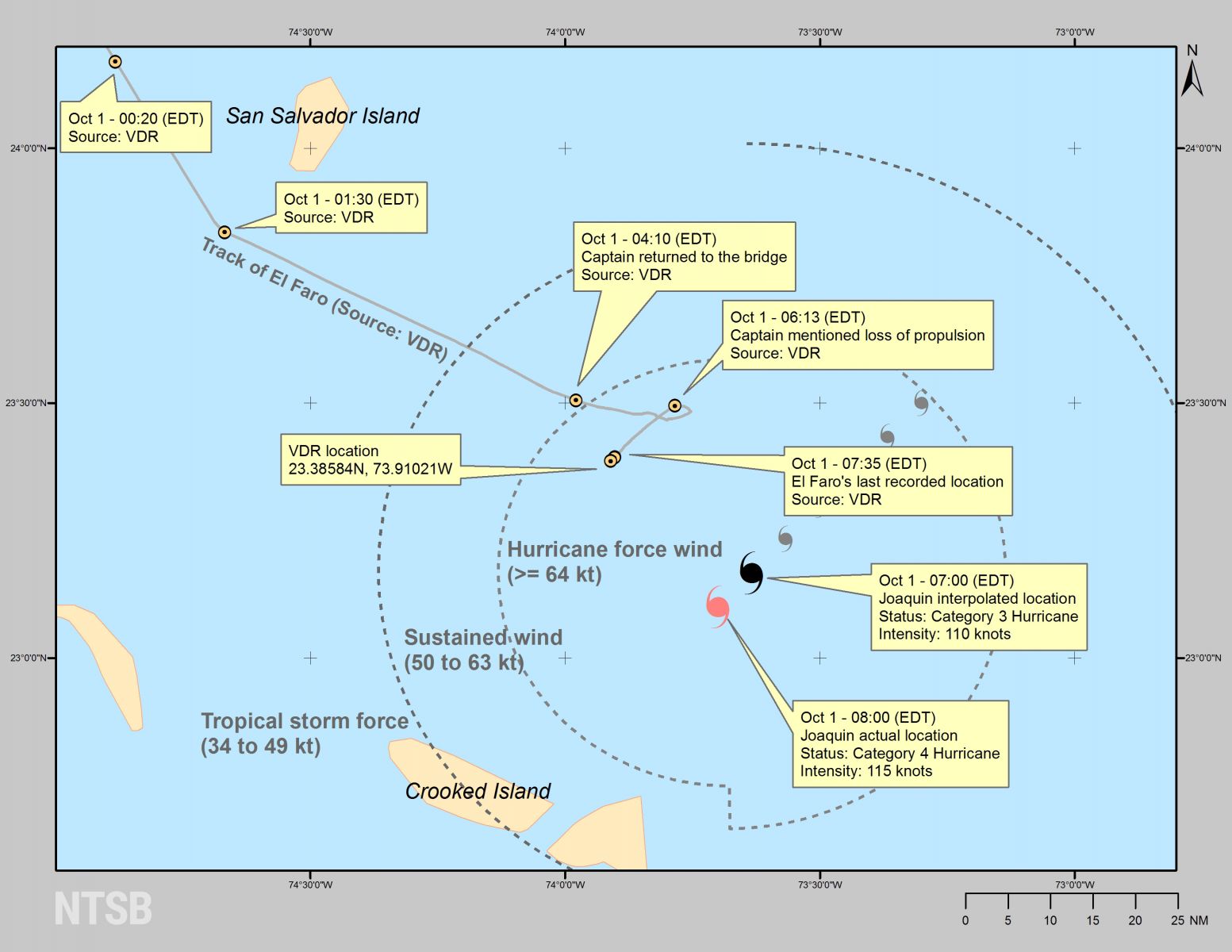 At 2314 on September 30, the third mate called the master to warn of a closer-than-expected approach to the intensifying hurricane. “On the four hundred [watch] we'll be twenty-two miles from the center,” the mate said. “With . . . max one hundred [knots] with gusts to one-twenty and strengthening so – the option that we do have . . . is at oh-two hundred we could head south.”

However, the third mate told the AB on watch that the master expected El Faro to pass safely through the southern half of the storm, and he intended to hold course.

“I trust what he's saying,” the third mate said. “It's just being twenty miles away from hundred knot winds – this doesn't even sound right.”

At 0120, following news that the storm had been upgraded to a Category 3 hurricane, the second mate called the master and offered to turn “straight south” at 0200, a course which would have taken the El Faro into the lee of Crooked Island in the Bahamas.

Instead, the second mate told the AB that the master had instructed her to make a course of 116, towards the storm, and to “run it.”

By 0330, the weather was worsening. The chief mate arrived to relieve the watch at 0344, and the second mate informed him that the master had been called.

The captain arrived on the bridge at 0409, and he suggested that the force of the storm was not a cause for concern. "Well this is every day in Alaska," he said. "I mean we're not even rollin'. We're not even pitchin', we're not pounding."

At 0440, the chief engineer called the bridge and requested a course change to relieve the vessel's angle of heel.

The master instructed the AB to put the vessel into hand steering and to hold a heading of 065, then 050.

The captain and the chief mate discussed the "oil sumps" and "oil levels."

The alternate chief engineer (a supernumerary) came up to the bridge and discussed lube oil levels with the master. "[You hit] the low pressure alarm on the lube oil . . . level of the engine . . .” he said.

"Feel the pressure droppin' in your [ears] just then?" the captain said at 0449.

While they could gauge barometric pressure, the bridge team was unable to get a precise reading of the wind speed because they lacked an anemometer. "We don't know. We don't have [any] anemometer," the master said.

Flooding in a cargo hold

The mate departed the bridge, and on scene he reported by radio "a hold flooded on the starboard side . . . about knee deep in here."

The captain indicated that the cause of the flooding was from a scuttle that had "popped open."

To address the starboard list resulting from the flooding, the captain ordered the engineering watch to "pump [ballast] from the starboard ramp tanks to port." He asked for more turns, and told the helmsman to come to a heading of 350, intending to put the wind on the starboard side and use its force to counteract the list.

It worked, and at 0557 he said that "we got a nice port list" and asked the engineers to stop transferring ballast.

At 0601, the chief mate reported that crewmembers had closed the leaking scuttle.

At 0613, the captain said that he believed the ship had just lost "the plant."

Ten minutes later the captain indicated that engine RPM was coming back up again, but at 0648 he told the AB on watch that there were no turns on the shaft.

In a call to the company's designated person ashore at 0707, he said that "the engineers cannot get lube oil pressure on the plant therefore we've got no main engine."

In addition, he said that there was a "considerable amount of water in three hold" and that the vessel had a dangerous list. The scuttle had been secured, he said, but the water level was not going down despite efforts to pump out the compartment.

At 0714, the second mate relayed a message on continued problems in the engine room. "[From] the uh chief [engineer] . . . he's just telling us the same thing. He can't do anything with this list."

At 0715, the chief mate reported that "something hit the fire main" in an unidentified cargo hold and ruptured it, and that the "water level's rising." The master instructed the engineering watch to secure the main from within the engine room.

The chief mate said that he had closed a watertight door to four deck and would not be reopening it.

For the remaining minutes of the recording, the captain attempted to help the helmsman to get out of the bridge; the AB called for a line or a ladder, but neither were at hand. Both men were within range of the bridge microphones until the end.