On March 6, 2018, the towboat Ms Nancy C was moving cargo barges on Everett Lake, a long lake connected to the Mississippi River. At about 1630 hours, a deckhand discovered water in a void towards the stern. The captain and the deckhand attempted to dewater it, but it began to go down, and they escaped to their barge tow without injury before it partially sank by the stern. Upon raising her, investigators found signs of significant corrosion and wastage that may have contributed to her sinking.

On the day of the sinking, the Nancy C was working a barge pushed up against the west bank of the lake. Winds were 35 knots and the surface was choppy with waves of 3-4 feet, above the Nancy C's two-foot freeboard. The deckhand noticed water coming over the side at the stern, and he went back and opened the hatch to look into the vessel's aftermost void. It was three-quarters full, and it filled quickly, even with two electric submersible pumps running to pump it out. When he and the master went to get a bigger pump from the barge, they returned to find the Nancy C going down by the stern. She was held to the barge by face wires, so her bow and wheelhouse remained above water.

Five days later, the Nancy C was raised, and investigators came aboard to inspect her. They found flush-deck manhole covers with broken screws, scarred gaskets, pitting and corrosion. Steel wastage was extensive from the port engine room hatch, around the aft side of the house, and up to the starboard engine room door. This wastage reached into the overhead of the forwardmost of her two stern voids. The vessel operator had welded doubler plates over the corroded areas, but investigators found gaps between the doublers and the side of the deckhouse, with visible holes into the interior. 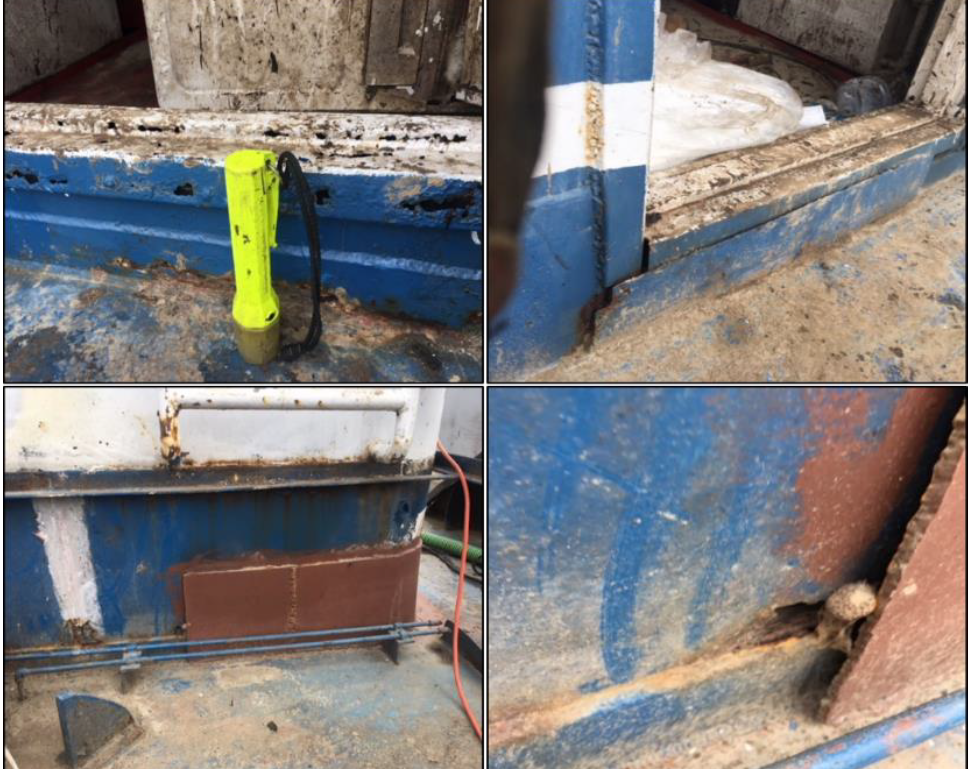 Wastage and doubler plates on the Nancy C's deckhouse (NTSB)

In addition, an inspection of her engine room found that the operator was using two homeowner-grade automatic pumps to remove water from cofferdams placed around the Nancy C's stern tube packings. The cofferdams caught water leaking from the packings; the pumps would turn on automatically and pump it out through a hose run through a hole in the main deck. One of these hoses was leaking where it passed through the forwardmost stern void. The two voids were not separated by a watertight bulkhead, due to two non-watertight pipe penetrations, and the deckhand told investigators that it was common to pump out the aftermost void weekly.

NTSB indicated that Nancy C could have begun taking on water via any of several ingress points, either from rain or from waves washing onto her deck. As she settled by the stern, she would have taken on more water into her after voids via the manhole covers, then more into her engine room through the wastage on the aft side of the house.

The NTSB concluded that the probable cause of the sinking was "inadequate maintenance . . . resulting in corrosion and the loss of watertight integrity on the main deck, which allowed uncontrolled water ingress into the vessel’s stern voids."