The National Transport Safety Board (NTSB) has called for proper operation and maintenance of electrical equipment in vessels after it emerged that maintenance may have contributed to an electrical generator set failure. The failure caused the loss of steering which in turn led to the grounding of the towing vessel Marquette Warrior near Greenville, Mississippi in November last year.

Nine months after the Marquette Warrior underwent a refit and refurbishment that included a complete electrical replacement of all wiring and electrical devices, the towing vessel experienced an online genset failure that caused loss of steering while pushing 1,000-foot-by-245-foot 35 loaded dry cargo hopper barges arranged five wide and seven long. The barges contained a cargo of soybeans, beans, rice, and corn that was being delivered to several facilities farther south.

The investigation report shows that while the towing vessel was transiting, the onboard engineer saw flickering lights and a ground fault indication on the main switchboard. The engineer contacted the pilot in the wheelhouse to request the pilot stop the vessel so he could troubleshoot what he suspected was a problem with the electrical system. The pilot was not able to stop the vessel due to the size of the tow and its location.

The engineer identified an issue with the online port electrical genset. At the same time, the pilot noticed that he had lost steering control. Hearing that the vessel had lost steering, the engineer decided to switch online gensets, which necessitated a temporary loss of the towboat’s electrical power. Although the engineer resolved the electrical issue by switching gensets and restoring steering relatively quickly, the loss of steering in the swift current and limited maneuverability of the large tow prevented the pilot from avoiding grounding.

The loss of steering led to several barges being grounded on the riverbank with four barges damaged, including a hopper barge that partially sank. Following the grounding, the Marquette Warrior, aided by several nearby “Good Samaritan” vessels, corralled the scattered barges and rebuilt the tow. 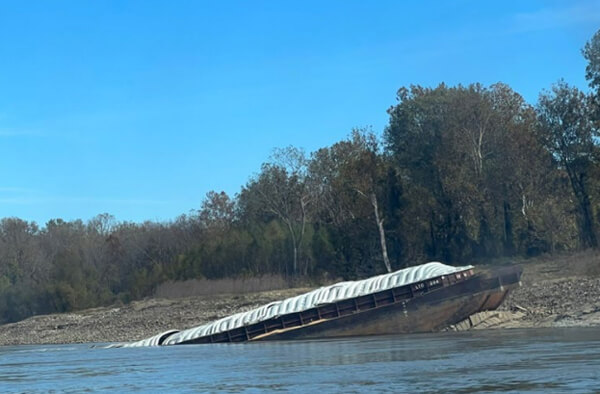 Although no pollution or injuries were reported among the nine crew members, the accident resulted in damages to the vessel, barges, and cargo estimated at $1.2 million. Four of the barges sustained damage, mostly to their rake bottoms and side shell plating, with the steel plating being dented or inset. One barge partially sank and was later salvaged, with the NTSB reporting that damage to the barges was estimated to be $215,000.

The grounding caused water to enter the hopper of the one barge resulting in its bean cargo being contaminated with water and valuated at $1 million the cargo was declared a total loss. The towing vessel also sustained an estimated $7,500 in damage.

In its investigation, the NTSB finds that the grounding occurred only two weeks after the Marquette Warrior experienced a port genset shut down causing the vessel to lose power. The vessel’s engineer had determined the cause of the shutdown to be a failed 12-volt direct current electrical relay within the genset’s diesel engine starting circuit, which he replaced with an onboard spare.

“Proper operation and maintenance of electrical equipment is required to avoid damage to vessel critical systems and prevent potentially serious crew injuries, particularly for electrical systems with high and medium voltage and equipment with uninsulated and exposed components,” said NTSB in its report.

Analysis of the genset’s alternator following the grounding indicated that the most likely cause of the failure was rubbing or chaffing of the sensing wiring harness, which led to arcing between terminal block posts, heat buildup, insulation failure, and eventual winding ring terminal connection failure.

At the time of the grounding, the port genset had been running for 72 hours since the relay failure and preventive maintenance, without incident. It had run a total of 675 hours (about 28 days) since it had been refurbished.

NTSB investigators determined it is likely the chaffing of the wiring harness took place over the 72 hours the genset ran between the two-week period of maintenance inspection and the grounding.