Despite the record import container volumes during the summer and early fall as retailers replenished inventories and stocked up for holiday season sales, there are indications that volumes peaked and will not make up for the strong declines in the first half of 2020. Also, with continued economic uncertainties and a potential decline in consumer holiday spending, volumes are expected to decline in the coming months, according to estimates from the National Retail Federation and Hackett Associates in their monthly Global Port Tracker report.

Analyzing import volumes at a dozen of the United States' largest ports, the Global Port Tracker estimates a more than six percent increase in import volumes between July and October, the peak shipping season when retailers rush to bring in merchandise for the winter holidays. The estimated 8.1 million TEUs during the four-month period would also beat the previous record of 7.7 million TEU set in 2018.

Despite the summer-fall rebound for import volumes, the NRF forecasts, however, that total import volumes at the largest ports will be down more than three percent for the full year. The strength in the second half of 2020 cannot make up for the steep declines between April and June, bring the year’s total at just under 21 million TEUs, which would be the lowest level since 2017.

“Part of this surge was fueled by restocking after retail sales rebounded this summer and part could be making sure there aren’t shortages if we see panic buying again,” NRF Vice President for Supply Chain and Customs Policy Jonathan Gold said. “The economic challenges of the pandemic aren’t over yet, but this clearly shows how an industry that has been under stress is fighting back in a positive way. Retailers don’t import merchandise they don’t think they can sell, so this is a good sign for the holiday season.”

The peak season record includes a record of 2.11 million TEU imported in September. That is a 12.5 percent year-over-year increase and would be the largest number of containers imported in a single month since the NRF began tracking imports in 2002. It was also slightly ahead of the volumes reported for August.

The NRF data projects, however, that total import volumes across the ports peaked in September and while up 6.5 percent year-over-year in October declined five percent versus September. Contributing to this may be an early forecast that consumer spending could be down five percent this holiday season. 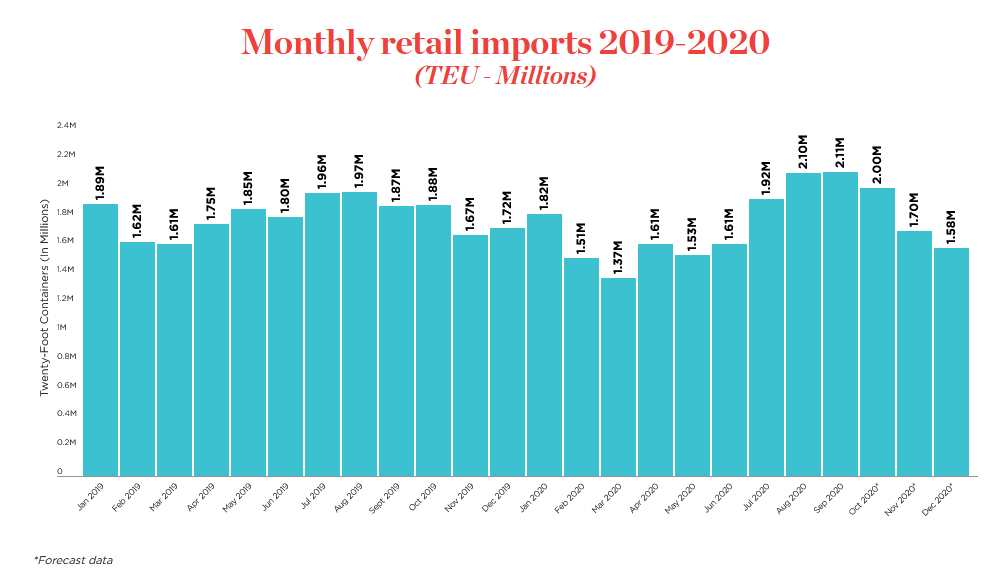 “As we near the end of a difficult year in terms of health, trade, and politics, we have witnessed record-breaking statistics that have been virtually unpredictable,” Hackett Associates Founder Ben Hackett said. “Imports hit all-time highs this summer and online shopping did the same. Whether similar patterns will continue in the coming months will be influenced to a large extent by the coronavirus pandemic and whether it will be brought under control by the arrival of expected vaccines next year.”

Typically, retail import volumes decline late year after the peak season rush but the NRF is also forecasting weak comparisons to 2019. The November forecast is 1.7 million TEU, flat year-over-year, while December is forecast down over eight percent at 1.58 million TEUs.

January 2021 is also forecast to be down 3.7 percent and even February, which has a weak comparison due to the start of the pandemic, is expected to be largely flat versus 2020. They are calling for a year-over-year rebound in March 2021 versus 2020 when Chinese manufacturing was closed and the U.S. began to experience the pandemic.