Ports around the United States, and many parts of the world, have been reporting a rebound in volumes as economies began to recover from the shock of the pandemic and governments took steps to support restroe activity.

According to new data from the largest retail trade association, the National Retail Federation (NRF), and Hackett Associates, the rebound in retail sales helped to drive U.S. imports to an all-time high this summer. Contributing to the high volumes seen in the ports, was merchants’ efforts to replenish inventories and increase stock in advance of the holiday retail season.

“After staying at home this spring, consumers are buying again and retail supply chains are working overtime to keep up with demand,” said NRF Vice President for Supply Chain and Customs Policy Jonathan Gold. “Nothing about this year is predictable, but retailers are making sure their shelves and warehouses are well-stocked for the holidays. They are also stocking up earlier than usual because they know many consumers will be shopping early this year to avoid crowds and shipping delays. Some holiday merchandise that normally wouldn’t arrive until Halloween is already here.”

The surge in volumes has led to several challenges both for the ports and carriers.  Shipping lines are struggling to find and reposition empty containers. At the same time, ports are reporting congestion issues impacting shipping schedules and slowing the movement of goods out of the terminals. 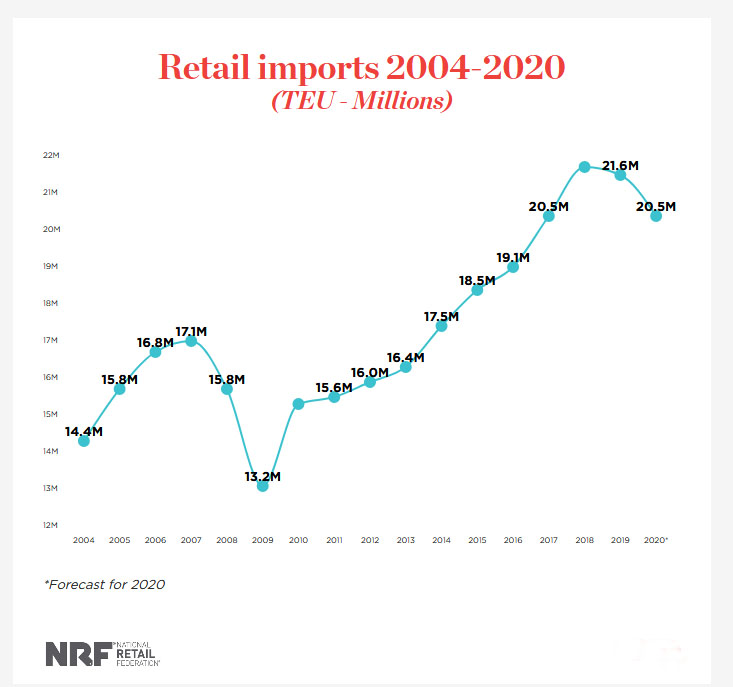 According to the NRF’s monthly Global Port Tracker report, the U.S. primary ports saw a 9.7 percent monthly increase in volume in August handled 2.1 million TEUs. That also represents an eight percent year-over-year increase. It was the highest number of containers imported in a single month since the NRF began tracking imports in 2002, beating 2.04 million TEU seen in October 2018 as shippers rushed to beat a scheduled tariff increase.

Expectations for September projected it could become the second-highest month on record. The report estimates a 10.9 percent increase year-over-year to over 2 million TEUs arriving at the largest U.S. ports in September.

Retailer imports traditionally peak during the summer and early fall in advance of holiday sales. Typically, the levels begin to decline, and as such the Global Port Tracker is forecasting a 1.1 percent decline year-over-year for October to 1.86 million TEUs. Shipping industry analysts have also pointed to the rush to get goods out of China before the Golden Week holidays during the first week of October when most businesses close across China.

Even with the expected decline in October, they are forecasting 7.96 million TEUs during the peak season between July and October. With retailers rushing to import merchandise for the holiday selling season, they note that three-quarters of the estimated total, or more than six million TEUs, has already arrived at the ports. The total peak season imports are expected to exceed the record of 7.7 million TEUs imported in 2018.

“The U.S. economy is beating forecasts with consumption up and imports setting new records,” said Hackett Associates founder Ben Hackett. “Retail sales are a big part of consumer spending, so one would expect to see an increase when the economy improves and consumers are confident. But less than six months after the biggest decreases on record this spring, retail sales have bounced back to pre-crisis levels.”

For the remainder of 2020, the Port Tracker predicts a decline in monthly imports of over five percent in November and as much as 11 percent in December. The total of all of 2020 is projected at 20.5 million TEUs, down nearly five percent year-over-year, and the lowest annual total in three years.

The Port Tracker also expects steep declines in January 2021 while import levels might begin to level off in February. This coincides with other container industry analysts who have projected that the surge in volumes might not be sustainable.

The NRF’s Global Port Tracker provides historical data and forecasts for the U.S.’s largest and most active ports. This includes Los Angeles/Long Beach, Oakland, Seattle, and Tacoma on the West Coast; New York/New Jersey, Port of Virginia, Charleston, Savannah, Port Everglades, Miami, and Jacksonville on the East Coast, and Houston on the Gulf Coast.