Norway is continuing its efforts to support the development of a pioneering generation of hydrogen-fueled ships. The government-owned group Enova is awarding $13.8 million to a new project to develop two bulkers that will operate along the Norwegian coast in both the North Sea and Baltic. This latest project brings to 10 the number of hydrogen-fueled ship projects receiving support for Enova.

“The vessels will be among the first of their kind to demonstrate hydrogen solutions,” said Nils Kristian Nakstad, CEO of Enova announcing the funding. “The vessels will be central to demonstrating the solutions and lowering the risk for those who come after. The technologies for energy efficiency are also innovative, and the use of wind is important for reducing the need for added energy and increasing the competitiveness of emission-free energy carriers.”

The two vessels will be built for Halten Bulk and are the latest in a series of designs to meet Norway’s pending strict regulations to eliminate carbon emissions from vessels operating along the coast. Halten Bulk, which is a partnership between Brødrene Nordbø, Egil Ulvan, and Strand Shipping, was established in 2014 and currently operates seven short-sea bulk vessels. 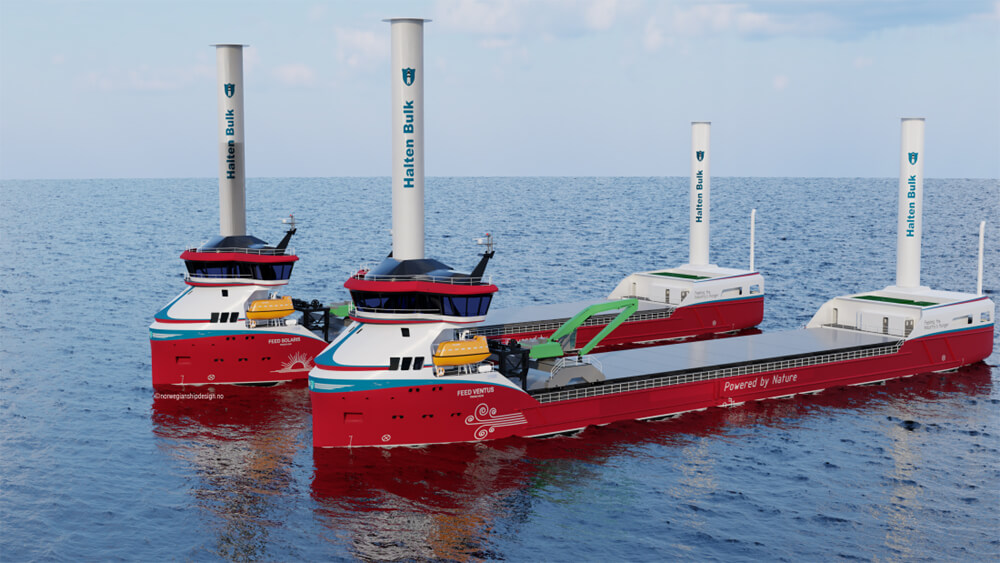 Design for the two new vessels will be undertaken by Norwegian Ship Design, which now has orders for five hydrogen-fueled vessels. CEO Gjermund Johannessen notes that they are becoming a leader in the development of these new vessels. The designs for Halten’s vessels will draw upon the “Powered by Nature” concept developed with one of Halten’s owners, Ulvan, for the first hydrogen-fueled ship known as With Orca.

The bulker design for Halter will be approximately 325 feet long with 8,000 square meters of cargo space. As part of the proposal to Enova, the design calls for a hydrogen combustion engine, storage solution for hydrogen canisters aboard, battery power system, and two rotor sails.

Halter explains the plan is to run the vessels using marine gas oil until hydrogen becomes commercially available. Initially, the ships will use the combustion engine but the design will also accommodate the later installation of fuel cells.

At first, they expect to use a combination of 70 percent hydrogen and 30 percent marine gas oil. Over time, as the availability of hydrogen increases and it becomes more price competitive, they plan to use a greater proportion of hydrogen.