The vessel sailed the North Sea from Delfzijl in the Netherlands to Hamburg and Norway and then back to Rotterdam.

The modular Ventifoil units are wings with vents and an internal fan that uses boundary layer suction to double the force of the Ventifoil, while reefing when needed. Together with the Technical University of Delft and MARIN, eConoship studied several concepts of wind propulsion, concluding the suction wings studied by Jacques Cousteau were most promising.

On the captain’s demand, the Ventifoils deploy automatically to the optimal angle relative to the apparent wind. The generated force is transferred into the deck, and motor power can therefore be reduced. The Ventifoils can be containerized inside a 40-foot container or fixed to a vessel.

The eConowind system was installed on the Jan van Dam Shipping vessel in January 2020 at the Royal Niestern Sander shipyard. The installation features two, 10-meter wings that are anticipated to be extended by a further six meters in the future. 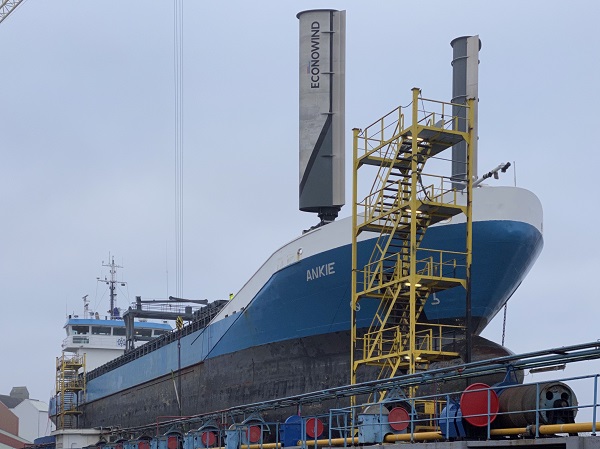 The installation is a first for eConowind, located in Groningen, the Netherlands. RINA carried out the design approval, foil production and construction supervision together with the commissioning protocol preparation.

Jan van Dam Shipping aims to incorporate the system into a newbuild vessel as it aims to reduce its CO2 emissions.

The wind-assist system was developed over the past three years supported by an E.U. backed grant. The Wind Assisted Ship Propulsion (WASP) project is funded by the Interreg North Sea Europe program, part of the European Regional Development Fund and brings together universities and wind-assist technology providers with shipowners to trial the operational performance of a selection of wind propulsion solutions.