Captain Johannes March has patented a system, the ITSS- Integrated Terminal Ship System, designed to handle the direct loading / discharging and both side handling between large container vessels and feeder ships without cost intensive shore side handling.

Container ships of 18,000 to 22,000 TEU generally call at fewer ports per voyage and require a far higher handling productivity than smaller vessels to avoid inefficient longer port stays. Consequently, there is a need for feeder operations with lower transshipment costs, says March. “The ITS-System covers those operational and market requirements. Moreover, in the competition between major container terminals the attraction of transshipment cargo will very often become the decisive factor for the selection of ports of call and their overall throughputs, as transshipments will also attract general quay cargo according to respectively adjusted frequencies for individual schedule loops by the shipping lines.” 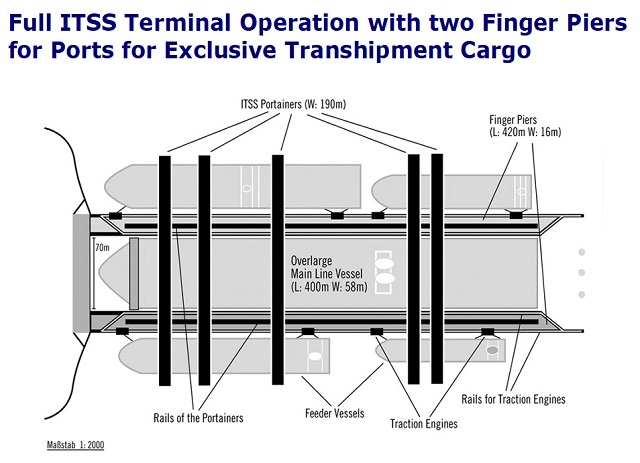 The fast docking of a large container vessel into the ITSS terminal would be achieved by two lots of three (three on each side) traction engines on rails as per the above drawing allowing the precise moving of the ship to the required final position, comparable to the operation in the old locks of the Panama Canal. Thereafter the traction engines would move to the outer rails of the finger pier(s) and fasten the feeder ships at the outer side of the finger pier(s). Five high performance gantry cranes with two gears spreading over the whole terminal including the feeder vessels alongside the finger pier(s) allow a simultaneous operation to both sides.

After finalizing cargo operations for a container bay (hatch) of the main line vessel or the feeder ship the gantry cranes cannot be shifted after every container move for productivity reasons in practice. As the topic of the ITSS invention and patent, this theoretical shifting of the gantry cranes will be replaced by the precise alongside shifting of the feeder vessels according to the individual container bays of the large vessel and the feeder ships as per stowage planning by the fastened traction engines after having moored the main line vessel and moved to the outer rails of the finger pier(s).

Due to the direct single move of the transshipment containers between the overlarge container ship and feeder vessels instead of double moves via the quay and stack as well as the both side operation the terminal productivity and berth utilization will be quadrupled, says March. One ITSS terminal with two finger piers would replace four conventional container terminals with respective investment savings.

As up to 50 percent transshipment cargo will be moved directly in one move without shore handling to the water side and the local cargo simultaneously to the quay side the terminal productivity and berth utilization  will be tripled . One ITSS terminal would replace three conventional container berths with respective investment savings.

The low average loading rate of 150 moves per ship hour will be doubled to 300 moves per ship hour due to the both side operation. Consequently, the respective port time and ship system cost per port stay would be halved. Additionally, emissions in port could be reduced by 40 percent.