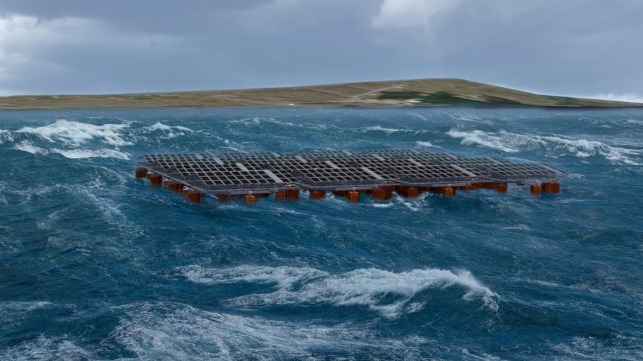 On Tuesday, a group of technology companies and researchers released a concept design for a new autonomous guard vessel for offshore installations like wind farms. Manned guard vessels pose several operational challenges, including the cost and the dull nature of the task, which makes it difficult to recruit and retain qualified mariners.

“Guard vessels perform an essential job, however, it is not the most exciting one for crew. Combined with the fact that conventional guard vessels are mostly outdated and thus aren’t necessarily the most comfortable let alone sustainable, it can be difficult to find well-trained crew willing to do the job," said Pelle de Jong, the founding partner of LISA.

Their Autonomous Guard Vessel (AGV) is designed for surveillance of offshore structures like wind farms, substation platforms and cable routes. Using sensors and computing power, the AGV would continuously monitor marine traffic with radar, AIS and visual input. Any intruding vessel would be contacted with information on how to safely navigate the area, and would be physically escorted away from the site by the AGV. The encounter would be recorded to provide video footage in case of any violation or accident.

The AGV does not require crew onboard, so accommodations can be eliminated, meaning the vessel will be considerably smaller than existing guard vessels. The smaller size creates a number of opportunities, including reduced propulsion requirements and the possibility of using batteries.

"The ship has solar panels across the top which allows for the continuation of navigation and communications in case the batteries run out of power," said Rolph Hijdra, Autonomous Research Lead at C-Job Naval Architects. "Contrary to current guard vessels, the AGV will continue to be operational even with rough sea conditions and have minimal underwater noise owing to the smaller size, reduced propulsion requirements and absence of a diesel engine.”

The AGV is designed to recharge its batteries at an onsite charging station. Depending on the situation, charging could either be via a cable connection to the on-site equipment - such as an offshore transformer platform - or locally generated.

The consortium envisions the deployment of multiple autonomous guard vessels per site, and they would take turns in monitoring the area and recharging. One fully charged AGV would remain on standby at all times in order to provide support for the AGV on active patrol. “For example, when an intrusion is detected – one of the AGVs will monitor, warn, and escort the intruding ship to safety, while the others continue normal operations. Alternatively, it could take over from a monitoring vessel in case the battery runs out of power," said Harm Mulder, operations manager at SeaZip Offshore Service.

In the rare event that human intervention is required, the AGV would be connected to a command center, which could take over remote control in order to deal with an unusual situation. The center could be located either on shore or aboard a "mother ship."