A command investigation released by the U.S. Navy on Friday - just ahead of a long holiday weekend - details a series of substantial errors in the months leading up to the disastrous fuel spill at the Red Hill Bulk Fuel Storage Facility in Honolulu, which ultimately led to the site's closure.

The Red Hill Bulk Fuel Storage Facility is a unique asset. Between 1940-43, the Department of War carved 20 giant tanks out of a solid basalt ridge outside Honolulu, then connected them by pipeline to the piers at Pearl Harbor. It is among the largest bunker facilities of its kind, containing 250 million gallons of fuel for power projection across the vast Pacific Ocean.

Red Hill has received considerable attention over the years because of its advancing age and concerns about the possibility of a leak from one of its tanks. However, the spill that doomed the storage site had little to do with its material condition, and everything to do with the management of its pipeline operations.

On May 6, 2021, the operations team at Red Hill made a mistake while transferring fuel and ruptured two pipe joints, releasing JP-5 fuel into the facility's lower access tunnel. The net volume in Tank 12 dropped by nearly 20,000 gallons within 50 seconds.

A roving watchstander surveyed the area and found fuel spraying in the tunnel, and he reported that the floor was covered with fuel. He saw that the nearest water-collection sump for the facility's AFFF firefighting water catchment system was full, and he heard the sump pumps running. However, none of team recognized at the time that the powerful sump pump system was rapidly transferring up to 19,400 gallons of spilled fuel from the floor into the AFFF retention line, a large PVC pipeline suspended overhead. (AFFF is a toxic foaming mixture used during firefighting, and the retention system was installed to capture the substance so that it would not be released to the environment in the event of a fire.)

The slope of the retention pipeline in the tunnel system meant that there was a low spot in the line, creating enough volume to hold about 30-40,000 gallons of liquid without draining off by gravity. No fuel was found in the retention tank, and the engineering techs who checked the sumps reasoned that they had never activated; the control system showed no record that they had turned on.

No release to the environment had occurred, so regulators were not notified until the next day. The local press had already reported the incident by the time the facility's command reached out to inform state officials, who were not pleased.

Based on the volume of the affected fuel piping and the amount of fuel recovered, the responders estimated that a total of about 1,600 gallons of fuel had been released into the lower tunnel and about 1,500 recovered. Personnel involved in the facility were aware that about 20,000 gallons had gone missing from Tank 12, but they believed that it had been "repacked" into the main pipeline.

Unbeknownst to the facility managers, the better part of that 20,000 gallons had gone somewhere else - the AFFF retention line, which remained filled with fuel. Over the months that followed, the extra-large PVC line began to sag down into the corridor due to the extra weight of the liquid.

Six months later, on November 20, a roving watchstander was driving the passenger train through the tunnel (there is a miniature train inside the complex), and the cart struck a drain valve on the AFFF retention line. A mixture of fuel and water spilled out, and the fumes were so strong that the rover was forced to leave the area. 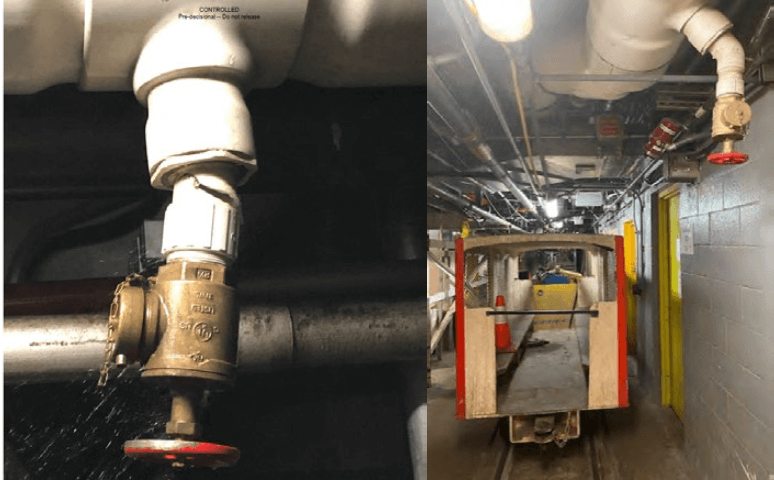 The fuel flowed downhill, and some of it seeped into a drainage line that feeds directly into the Red Hill drinking water well. The facility's managers did not know that this 80-year-old drainage system existed, and they believed that the fuel/water mixture had been contained within the tunnel.

The Red Hill staff was not aware that the water well had been heavily contaminated with fuel. Over the days that followed, the fuel/water mixture was pumped directly into the drinking water supply system for Joint Base Pearl Harbor-Hickam. About 5,500 gallons of JP-5 is unaccounted for, indicating the potential scope of contamination.

About 6,000 personnel experienced symptoms of exposure to hydrocarbon-contaminated drinking water after the spill, and about 4,000 military families had to relocate to temporary housing. The Navy now faces a class-action lawsuit for exposing military families to pollutants. In addition, the Hawaii Department of Health ordered the facility's immediate closure on safety grounds, fearing further spills and contamination of the aquifer that supplies most of Honolulu's residents.

“The lack of critical thinking, intellectual rigor, and self-assessment by key leaders at decisive moments exemplified a culture of complacency and demonstrated a lack of professionalism that is demanded by the high consequence nature of fuel operations,” the investigators concluded.

In March 2022, faced with sustained pressure from the public, the state and Hawaii's congressional delegation, the Pentagon agreed to close and drain Red Hill permanently. The Navy has formulated a defueling plan, which will take until the end of 2024 to complete of it proceeds on schedule. Having lost access to Red Hill, the Navy will now rely on a distributed network of smaller fuel hubs, to include "potentially afloat capabilities."