NACKS Launches its First 24,000 TEU Boxship Being Built for OOCL

China’s NACKS shipyard (Nantong COSCO KHI Ship Engineering Co.) floated the first of its new generation of ultra-large container vessels. The new ship, which is being built for Orient Overseas Container Line (OOCL), will be among the largest in the world with a capacity of 24,000 TEU and is 20 percent larger by capacity than the containerships previously built by the shipyard since 2018.

On November 15, the first 24,000 TEU containership built by NACKS, the OOCL Spain, was floated from the assembly dock and positioned at the outfitting pier. The shipyard is calling the vessel the world's largest green and environment-friendly containership, rivaling similar vessels recently floated out by the rival Jiangsu Yangzi Xinfu Shipbuilding Co. that are being built for MSC. Each of the ships is 1,312 feet in length with a molded width of approximately 201 feet, the current maximum dimensions of containerships. Evergreen has previously also taken delivery of new boxships of this size built in China while work continues at the Hudong Zhonghua on additional vessels for MSC.

Each of the shipyards highlights that their vessels are independently designed from their internal operations, creating small differences in the vessels and their loading capacity. Among the most visible differences are a more traditional bow design and bulbous bow on the NACKS vessel versus a new straight prow and smaller bulb for the MSC vessels which the shipyard said will improve operating efficiency. There are differences in the arrangement for loading the boxes with the MSC ships currently rated for the largest capacity at 24,346 TEU. 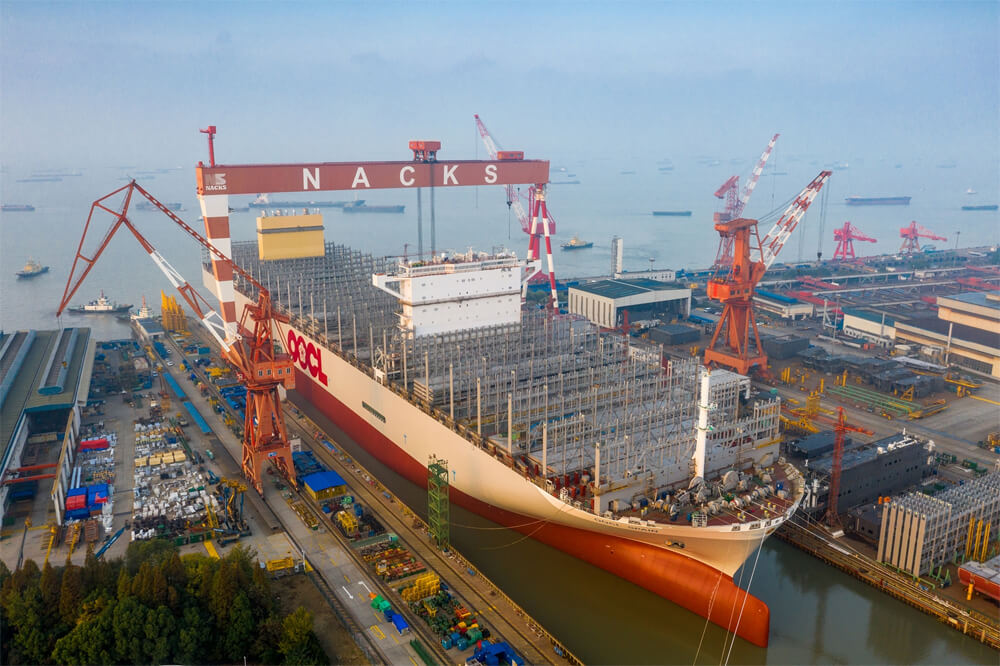 The new vessel for OOCL is part of an ongoing expansion by COSCO Shipping Holdings. COSCO acquired OOCL in 2018. The parent company said earlier this year that was spending $4.9 billion on fleet expansion with 34 new vessels already on order with a total capacity of 580,000 TEU. COSCO is ranked by Alphaliner as the world’s fourth largest carrier with a total of nearly 2.9 million TEU of capacity between its COSCO line and Orient Overseas as well as smaller operations.

COSCO at the end of October announced a further order for 12 additional ultra-large containerships split between DACKS (Dalian Cosco KHI Ship Engineering) and NACKS. The order, which was valued at $2.9 billion, includes seven vessels to be built by NACKS that will be assigned to OOCL. Due to enter service between 2026 and 2028, they said the intent is to operate these new ships on green methanol.