Using what the German authorities described as “enormous forces,” with a total of nine tugs they were successfully able to refloat the 210,000 dwt Mumbai Maersk at high tide on Friday morning. After a further inspection, the vessel was permitted to proceed to the dock in Bremerhaven, Germany, where Maersk reports they expect to begin unloading containers tomorrow. Further inspections of the vessel will confirm if it suffered any damage or can proceed with its voyage.

Germany’s Central Command for Maritime Emergencies (Havariekommando) spent yesterday preparing for the second towing attempt after a first effort failed to move the vessel shortly after it became stuck on a shallow area near Wangerooge island near the mouth of the Weser in the fairway leading to Bremerhaven. CCE reported that they sounded the area and also coordinated pumping out 7,000 tons of ballast water from the Mumbai Maersk. They were able to decrease the 1,309-foot vessel’s draft to just under 42 feet to aid the re-floating effort. The vessel was already riding high loaded with only 7,000 boxes well below its capacity of nearly 20,000 TEU. Maersk also retained Smit which sent two ocean-going tugs to assist with the effort. 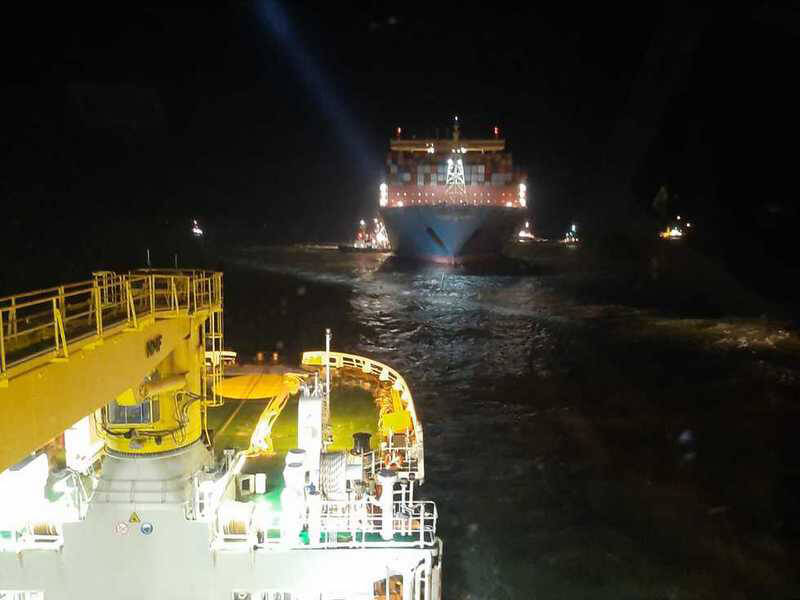 A total of nine tugs were positioned along the Mumbai Maersk with three ocean-going tugs amidships on the starboard side, two tugs with lines at the bow, and three more with lines at the stern. The operation began around 12:30 a.m. during a higher-than-average tide. CCME told a press briefing that the operation took less than 36 minutes to move the containership back into deep water. They said the salvage would not have been possible without the two additional ocean-going tugs that assisted in the towing operation.

The Mumbai Maersk undertook a series of tests in the Baltic to confirm that its rudder and propulsion system had not been damaged during the refloating effort. At midday today, the German authorities permitted the vessel to proceed under its own power to the dock, escorted by two tugboats.

During the briefing, a few additional details came out about the grounding while the authorities emphasized that the harbor police and the Federal Office for Maritime Casualty Investigations would investigate the cause. They reported that a pilot was aboard the containership as it was proceeding toward Bremerhaven. They did not comment on reports that the Mumbai Maersk made a loop taking it out of the fairway and into the shallow area. Maersk reports that it is also undertaking an internal investigation.

Maersk advised customers that if the assessments found any reason to further delay the vessel, they would look for alternatives to move the containers. The Mumbai Maersk is scheduled to proceed to Gothenburg, Sweden, and the company said they could use either a feeder vessel or schedule an extra loop if the cargo was being delayed. 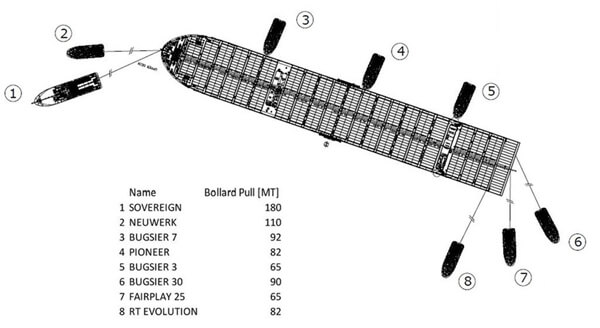 Diagram showing the tugs required to refloat the vessel (Havariekommando)