MSC Cruises used the introduction of its newest cruise ship, the MSC Seascape as an opportunity to highlight the cruise company’s growing commitment to the New York and U.S. cruise markets. The cruise company which was launched 30 years ago, today calls itself the fastest-growing cruise brand operating a fleet of 21 cruise ships with two more currently under construction.

The last of four cruise ships built for MSC by Fincantieri, the MSC Seascape is also currently the largest cruise ship built in Italy along with her sister ship MSC Seashore. The vessels are based on a revolutionary design developed by Fincantieri that increases revenue and passenger space with also increasing the outdoor deck space. The design repositions the primary weight of the ship, the engine spaces, to midships and the balanced repositioning of the weight provides greater structural and hydrodynamic efficiency.

At 1,112 feet in length, the MSC Seascape and her sister ship are the Seaside Evo Class which was approximately 11 percent larger than the first ships of the class launched in 2017 and 2018.  The ships are 170,412 gross tons with 2,270 passenger cabins. Among the accommodations featured on the MSC Seascape is the largest private suite enclave, known as the MSC Yacht Club, with 131 suites making it the largest on any MSC cruise ship. The total passenger capacity is a maximum of 5,877.

“We have ambitious growth plans in the U.S. and New York City plays a critical role in that expansion,” said Ruben Rodriguez, President of MSC Cruises USA. He notes that the company will start its first year-round cruises from New York in April 2023 with the MSC Meraviglia. MSC will be positioning the MSC Seascape year-round sailing from Miami and starting with the winter of 2023-2024 season they will be joined by three other ships for MSC’s largest ever deployment in North America. The cruise line notes that it is nearly doubling its capacity in the U.S. market. 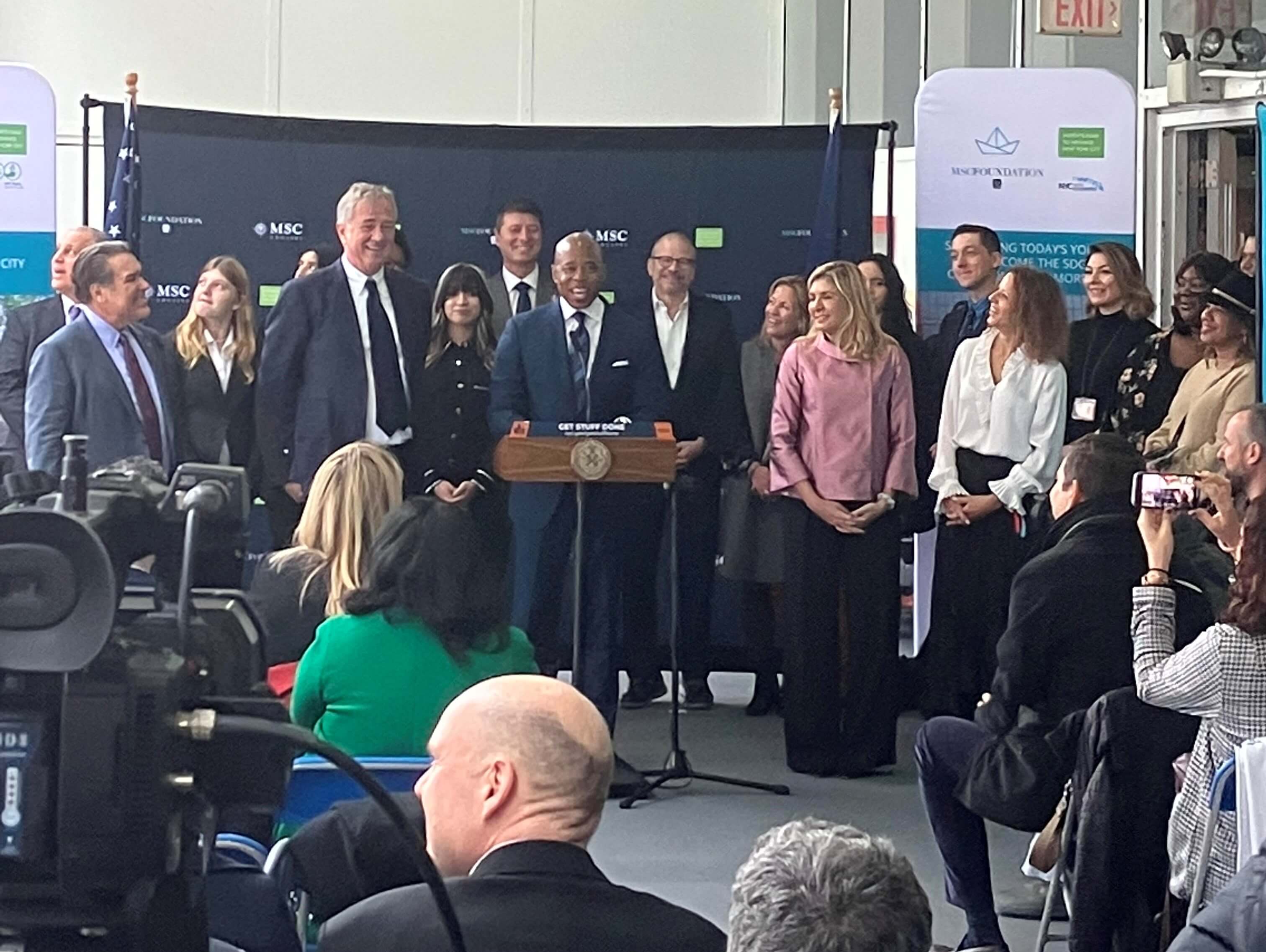 MSC Seascape arrived in New York on December 5, and tonight, December 7 the cruise line hosted a gala naming ceremony. They used the opportunity to highlight their philanthropic work through the MSC Foundation as well as the company’s focus on the environment both for its ships and to fulfill founder Captain Gianluigi Aponte’s vision to create a better world for future generations. They highlighted their charitable work around the globe including announcing today a donation of $236,000 to the New York City Parks GreenThumb Program and the New York City Junior Ambassador program.

The evening included a parade of the officers of the new cruise ship and a musical appearance by Italian singing sensation Matteo Bocelli. Godmother for all of MSC’s cruise ships famed actress Sophia Loren made an appearance by video due to the pandemic to bless the ship while Alexa Aponte Vago performed the honors of releasing the champagne bottle christening the new cruise ship. 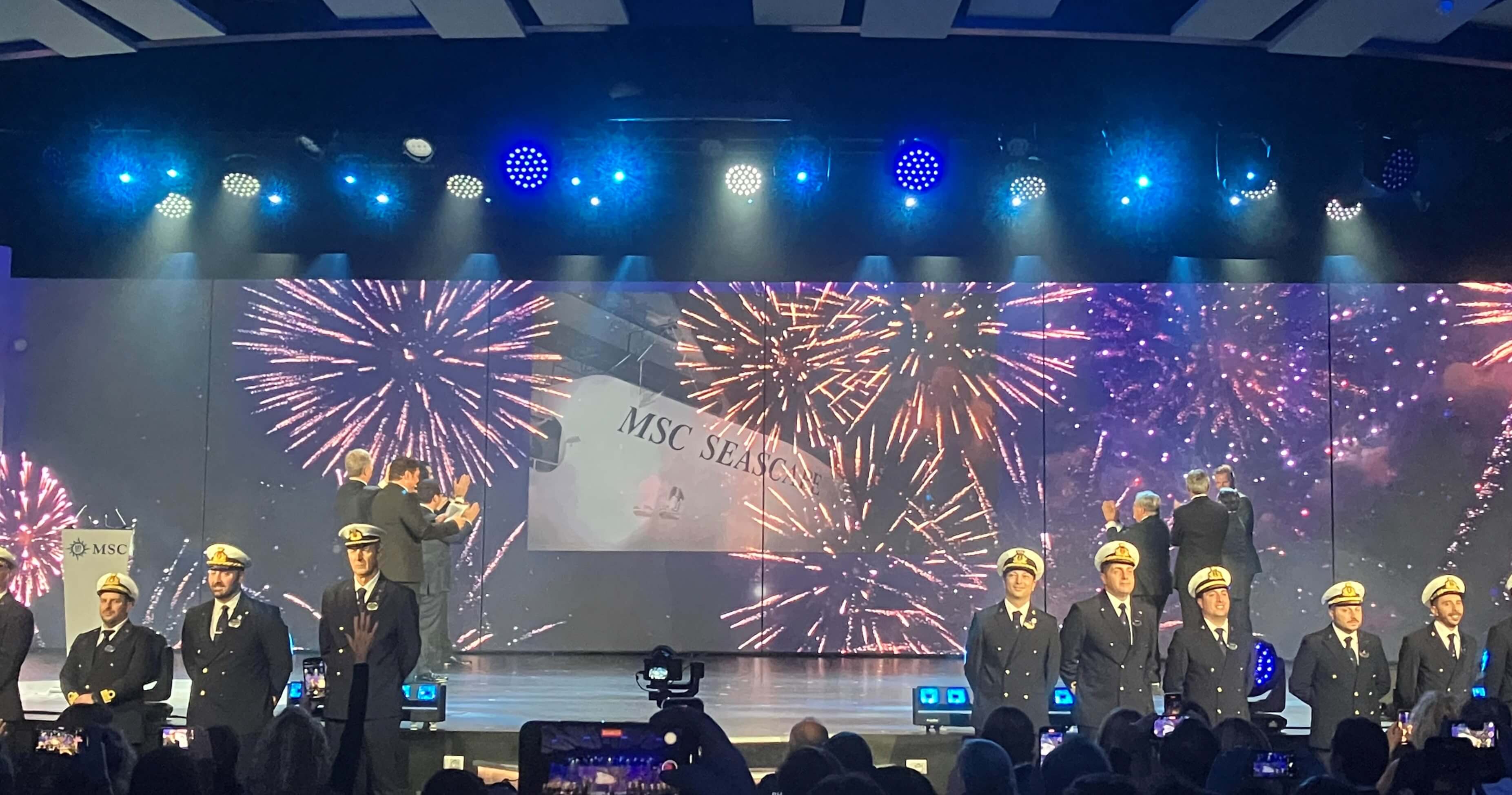 The MSC Seascape features a broad range of amenities for its passengers, including 11 dining venues and 20 bars and lounges. The ship also has six swimming pools as well 140,000 square feet of outdoor deck space, including 1,772-foot long promenades and a glass walkway 16 decks above the ocean. Amusements for the passengers include water park attractions, a sports arena, interactive and virtual reality gaming, and a new robotic arm roller coaster that MSC says delivers a one-of-a-kind thrill ride nearly 175 feet above the sea.

The cruise ship is also the most technologically advanced and greenest ship in the cruise industry. The company highlights its energy efficiency improvements, scrubbers for emissions, waste handling, heat recovery systems, special paint on the hull, and trim optimization systems. It is also fitted with advanced wastewater treatment systems and anticipates a future transition to new fuels such as methanol.

Fincantieri delivered the MSC Seascape on November 16 and the cruise ship ran a 17-day trans-Atlantic cruise that ended in New York. Her first sailing from Miami commences on December 11.

The new cruise ship is the second that MSC has introduced this year. In addition to two other cruise ships currently under construction in France, MSC also reports it holds a total of six options for additional cruise ships to possibly be introduced through 2030. It is all part of MSC’s ambition to become the world’s largest cruise company alongside its position achieved in 2022 as the world’s largest container carrier.