The pandemic and changing economics in the cruise ship industry are continuing to claim victims among the classic ships, many of which were pioneers in the modern cruise industry. Early in July, a cruise ship that was among the pioneers in the nascent Miami cruise industry met its end being beached at Alang, India, while half a world away in Aliaga, Turkey another pioneer in the modern luxury cruise segment also began the dismantling process.

Cruising in the 1960s was mostly a ragtag fleet of secondhand vessels, old and worn out, that had started to develop the leisure business. This changed when a series of entrepreneurs saw the possibility of building modern, purpose-built ships supported by the growing airline industry.

The Leisure World as she was known when she beached in India at the beginning of July was in many ways long forgotten and a far cry of her former self. In the mid-1960s Norwegian shipowner, Knut Kloster and Israeli entrepreneur Ted Arison formed a partnership using a luxury car ferry owned by Kloster to build the modern Miami cruise industry. So convinced of the potential of the market, Kloster hired designer Tage Wandborg of the Knud E. Hansen firm to develop additional ships.

The second cruise ship Wandborg designed for Kloster was still a car ferry with a stern ramp and two car decks when it was introduced in 1968 as the Starward. However, the market was evolving so quickly, that for the third ship they agreed to replace the car decks with additional passenger cabins, making her one of the first modern purpose-built cruise ships.

Named Skyward, the vessel was built as the AG Weser Shipyards in Germany. She was just 15,000 gross tons and 528 feet in length, but she was thoroughly modern. Wandborg was using his heritage in luxury ferry design to invent many of the elements of the modern cruise ship including placing the dining room on the main deck with large windows overlooking the sea and outdoor spaces for passengers to lounge in the Caribbean. Introduced in January 1970, the Skyward carried a maximum of 850 passengers and became the first purpose-built cruise ship to maintain year-round seven day cruises from Miami to San Juan and St. Thomas, a route that continues to this day in the industry known as the “milk run,” due to its enduring popularity with passengers.

The Skyward remained a popular member of the NCL fleet for 21 years. In the 1980s she moved to a western Caribbean cruise offering a Mexican immersion program and in her final assignment for NCL was based in San Juan for fly-cruises. She was one of the ships that became known as the “white ships” of NCL that together were the Caribbean pioneers in the 1970s, but Skyward would also be the first of the three to leave the fleet. In 1991, she was chartered to a firm in Singapore briefly as the Shangri-La World. By 1993, she had become the Leisure World, which was a floating casino operating from a base in Penang, Malaysia. The owners added large additional sections to the superstructure to accommodate more casino space with her spending most of her time anchored offshore with gamblers ferried out from shore.

Her owners, Singapore-based New Century Cruise Lines finally decided to retire the now 51-year old ship this spring and sold her to the scrapyards in India. 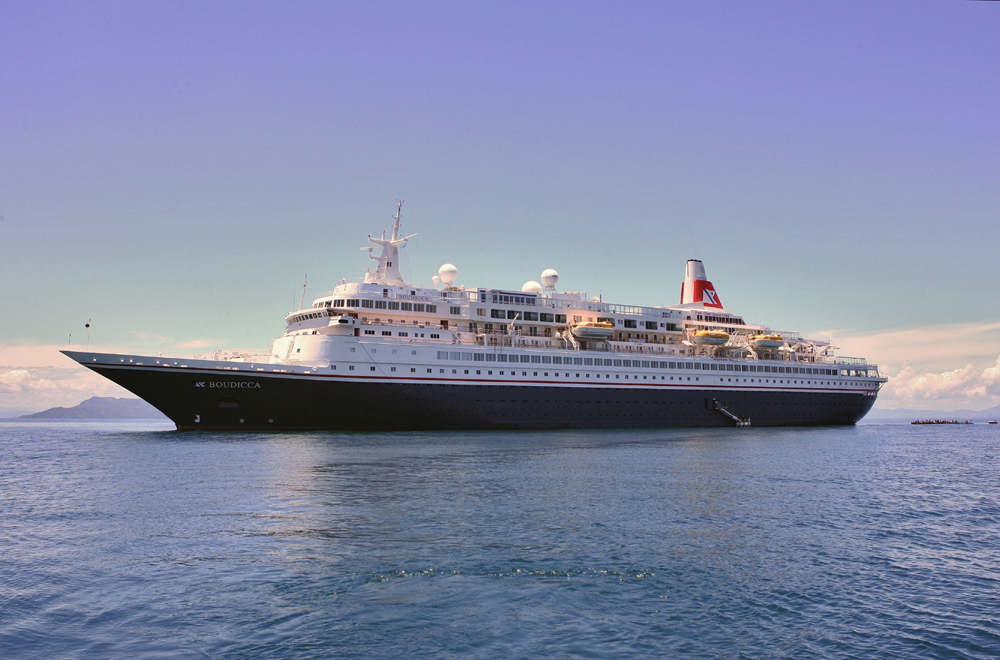 Built in the early 1970s as one of the first modern cruise ships from Wartsila, Boudicca retained her lines to the end of her carrier in 2020 (Fred Olsen photo)

Separately, in Turkey, the first of three cruise ships for a partnership between Bergen Line, Nordenfjeldske, and A.F. Klavness, also began dismantling. Introduced just three years after the Skyward, the 22,000 gross ton Royal Viking Sky was the part of a new firm called Royal Viking Line that was focused on the long, luxury cruise market. Along with her sister ships the Royal Viking Star and Royal Viking Sea, she would be an equal pioneer sailing the globe with world cruises, long trips to Asia, the North Cape, and the Mediterranean. She would go through a long series of owners and operators before in 2005 passing to Fred. Olsen Cruise Lines where she became the Boudicca and reunited with another of her sister ships in the UK market.

Fred. Olsen retired the sister ships during the operational pause in 2020 and sold both of them to become accommodation ships. The Boudicca however, quickly ended up at the scrapyard with her sister ship Black Watch expected to follow. The third ship of the pioneering Royal Viking Line spent many years as a German cruise ship named Albatros and just recently was also sold for scrap.

While these pioneers had been outclassed by more modern cruise ships, they hold a place in history as the cruise ships that helped to create today’s multi-billion dollar cruise industry.