MOL Working with Shipbuilders for Ammonia-Fueled Gas Carrier by 2026

Japanese shipping company Mitsui O.S.K. Lines announced participation in a second project to develop an ammonia-fueled vessel. Working with Japanese shipbuilders Mitsui E&S Shipbuilding and Tsuneishi Shipbuilding they are targeting 2026 for the introduction of the vessel, which they expect will be the first net zero-emission ocean-going vessel under MOL’s long-term environmental plan.

The new joint project announced between the three companies is aimed at developing and building an ocean-going liquefied gas carrier that will use ammonia as its main fuel. They are planning a mid-size ammonia/LPG carrier equipped with a main engine that can run mainly on ammonia, and targeting to achieve net-zero carbon dioxide (CO2) emissions while underway by using some of its ammonia cargo as fuel. They plan to employ a Mitsui-MAN B&W type S60 two-stroke dual-fuel ammonia engine that is currently under development. 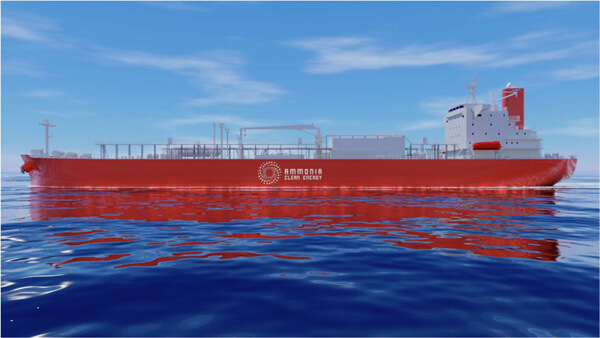 They are projecting that the vessel will be about 590 feet long with a carrying capacity of about 40,000 m3 of gas.

According to the companies, the design is being deployed from their experience and will be similar to the current class of ammonia carriers used for international maritime ammonia transportation. Basing the design on currently accepted standards they highlight will mean that their new ammonia-fueled vessel would be able to call at major ammonia and LPG shipping and receiving ports around the world. As such, it will be possible to deploy the ship on a broad range of routes.

MOL resumed its operations for the transport of ammonia in 2021 with a charter to a U.S. merchandising and ammonia trading company, Trammo. The ship[ping company said it was returning to the business after five years due to an anticipated demand increase for ammonia both for food production, but also as a next-generation clean fuel for shipping.

MOL previously announced an agreement working with MAN Energy Solutions and Mitsui E&S Machinery on the development of the dual-fuel engine with a target to purchase an ammonia-fueled main engine by 2026. The shipping line is also participating in a joint development study on the ammonia fuel supply chain in Singapore. Further, in November 2021, it was also announced that Mitsubishi Shipbuilding Co. was working with Namura Shipbuilding and MOL on the joint development of the large-size ammonia carrier fueled by ammonia.

The efforts are all in keeping with the Japanese group’s Environmental Vision 2.1 which maps out the strategy and goals for MOL to achieve carbon-neutral operations.