Indonesian authorities are reporting that the cargo ship reported missing four days ago was located Monday evening with the crew safely aboard. Few details were released, but reports indicate that the vessel was being moved to the port of Dobo with 13 crewmembers. The captain and an engineer were ill and evacuated.

The 3,861 dwt vessel Mutia Ladjoni 7 was found drifting after the vessel lost all power. The cargo ship departed the port of Timika in Indonesia on Western New Guinea on Wednesday, November 9. The route called for the vessel to proceed to the port of Bontang on the island of Borneo. The ship’s owner, PT Pelayaran Surya Bintang Timur, reported that they had lost contact with the cargo ship on Friday and were unable to reach the vessel on the radio on Saturday.

The team leading the SAR operation believed that the Mutia Ladjoni 7 had changed course to make a refueling stop in Dobo before the vessel went silent. The operation involved vessels from multiple SAR districts as well as the Indonesian Navy and local police. They also requested assistance from fishing vessels in the region. 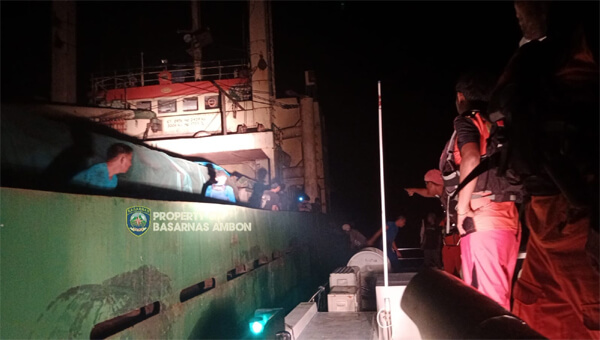 The head of the Basarnas Ambon district, which was leading the search, reported that they located the vessel on Monday evening. It was blacked out, possibly having run out of fuel. Reports also indicated that the fuel lines had become fouled with mud. The vessel had been drifting for several days.

“This morning, 13 crew members were evacuated to Dobo and two people immediately rushed to the hospital to receive medical treatment," said the head of Basarnas Ambon said in a statement after the Mutia Ladjoni 7 reached port on Tuesday morning. They indicated that the captain and an engine had become ill while the vessel was drifting and were evacuated to the hospital.

The SAR operation was declared over with the vessels returning to base. Basarnas said they would be working with the vessel’s owner for the return of the crew.

The Mutia Ladjoni 7, which was built in 1983 and is now registered in Indonesia, operates an inter-island cargo and general tramp service. The ship had unloaded its cargo last week and was traveling with only ballast on the current leg of its voyage. The vessel’s owner reports they operate six ships with a capacity of 2000 to 7000 dwt.