The UK's Marine Accident Investigation Branch (MAIB) has released its report into the engine failure and fire aboard the ro-ro ferry Wight Sky last September. According to the agency, the failure - which led to the injury of the Sky's engineer - may have been caused by the entry of debris into the engine during its installation.

In July and August 2017, the Sky's #2 main engine suffered a series of failures, beginning with an undiagnosed coolant loss problem. A contractor replaced cooled components as they failed, but the mysterious leak continued. Additional remedial steps resulted in engine damage, and operator Wightlink opted for a full rebuild.

The damaged engine was removed, and the contractor prepared a rebuilt unit for installation. Rather than remove the soft patch above the machinery space to lower in a complete, rebuilt engine, the service team delivered the rebuild's short block, cylinder head and sump pan separately in order to lower them through the emergency escape hatch. The escape hatch was too small to permit lowering the complete engine as a single unit, but passing components through it would be much faster than removing and reinstalling the soft patch, which would take 24 hours of labor.

The block and other parts were delivered on August 25, and were lowered into the engine room on August 29. Assembly was completed on September 4, but a damaged shaft coupling meant that it could not be connected up for a load test by the installers.

On the evening of September 12, the ferry was under way for the Isle of Wight when main engine #2 exploded and burned, five running hours after it had been rebuilt. The fire was brought under control within two minutes, minimizing damage to the rest of the vessel. However, the engineer was standing near the engine at the time of the blast, and though his boiler suit protected most of his body, he suffered severe burns to his hands and face. He was hospitalized for seven days, and was later diagnosed with post-traumatic stress disorder. According to MAIB, he has not returned to work.

During the post-accident investigation, an engineering team from the manufacturer inspected the engine to determine the probable cause of failure. They found that it had spun a bearing shell on main bairing #5, blocking the flow of lubricating oil to the crank pin for cylinder #4. The conn rod's big end seized on the crank pin, breaking the big end's bearing bolts. The rod then went through the wall of the crankcase and the lube oil gallery, leading to the explosion. 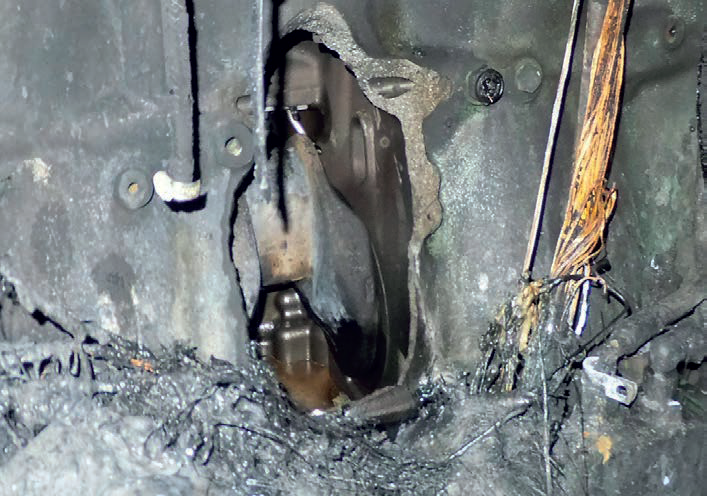 An analysis of oil in the engine's filter found high quantities of particulate matter, including unusually large particles of 1mm or greater. MAIB indicated that this suggested "sudden and rapidly progressing wear-down" before the main bearing shells turned.

The manufacturer's team suggested that large debris may have entered the engine during the three days it was at the site and disassembled prior to installation. Debris in the engine's oil channels could have led to the loss of lubrication at the main bearing, followed by the bearing shells turning and the rest of the failure sequence. Assembling the engine in a clean area prior to transport and installation would have reduced the likelihood of contamination, the manufacturer noted.

MAIB noted two recent instances in which engines of the same make and model had suffered a comparable failure (spun main bearing shells and/or catastrophic damage). Had the engine model been fitted with a particle detector to sense accelerated wear, these casualties might have been averted, MAIB suggested.