The UK's Marine Accident Investigation Branch (MAIB) has reported the second fatal crushing accident involving a rolling gantry crane within a little more than a year. The gantry aboard the coaster Cimbris crushed a stevedore against a hatch cover in July 2020, mirroring a nearly-identical accident aboard the freighter Karina C in May 2019.

Some European coastal freighter designs have a small gantry crane that straddles the hold, used for lifting and moving the ship's cargo hatches. Each leg of the gantry rides on rails on top of the hatch coaming. On some of these vessels, the gap between the inboard side of the gantry leg and the hatch cover is wide enough to admit - but not fully pass - a human body, creating a lethal pinch point as the crane sweeps along the length of the coaming.

The freighter Cimbris is one of these vessels. On July 13, 2020, she moored at a berth at the Antwerp Bulk Terminal in order to offload a cargo of fine coke. At 0600 the next morning, a team of stevedores came aboard to start the work. As it progressed, the chief officer manned the gantry crane and began to move a stack of hatch covers aft, making room so that the stevedores could access a pile of cargo amidships. The stevedore team's coordinator was working on deck, and the AB was standing security watch at the gangway.

The C/O lifted and moved one hatch cover without incident and drove the gantry back for the next in the stack. After looking to make sure that all was clear, he picked up a second cover and began to move aft again. Just before reaching the aft-most hatch position, the gantry stopped.

The stevedores' foreman, who had just come up the gangway, saw that there had been an accident and shouted to the C/O. They both ran to the port side of the coaming, where they found the stevedore coordinator wedged into the five-inch gap between the hatch cover and the leg of the gantry crane. He was pronounced dead at the scene. 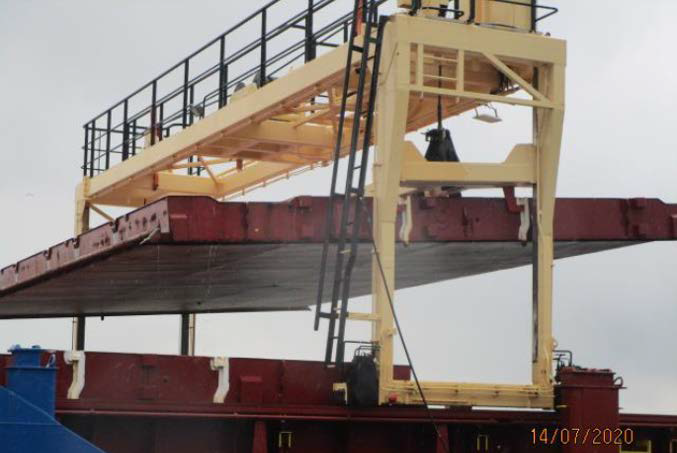 The gantry and the suspended hatch cover after the fatality, July 14, 2020 (MAIB) 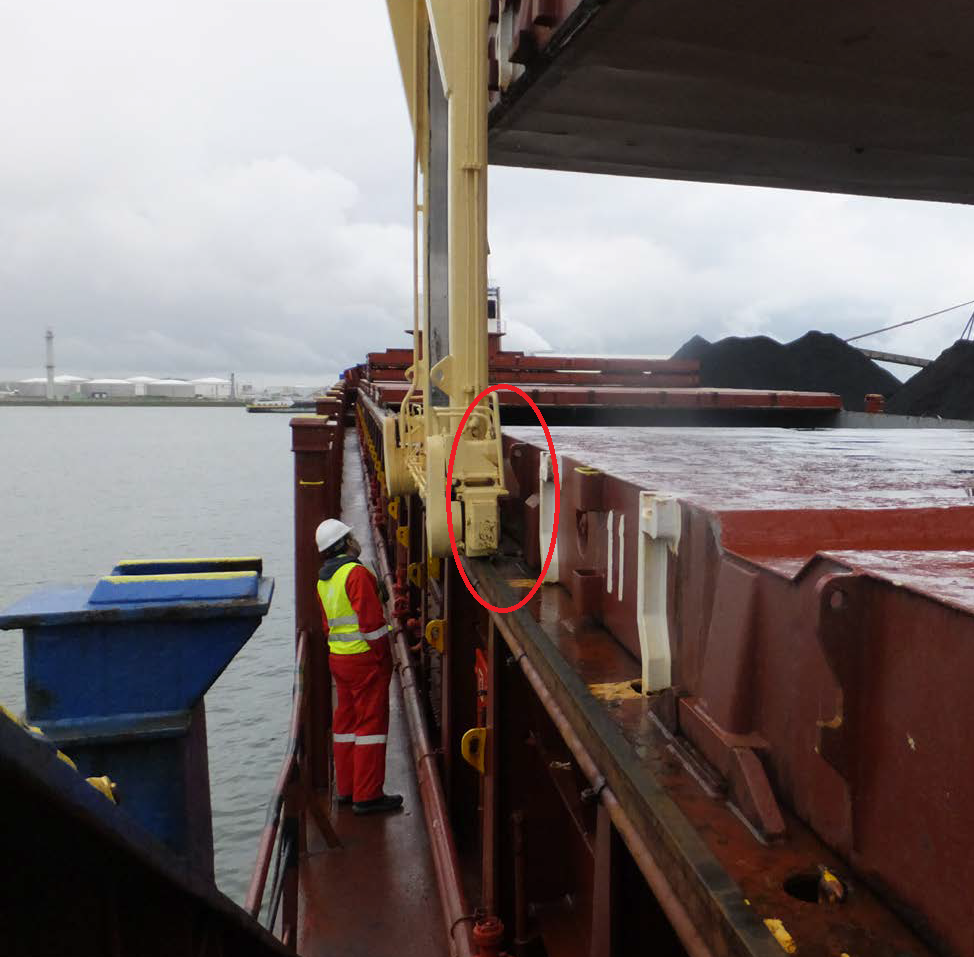 According to MAIB, the gantry crane had a loud movement alarm and a flashing light, but because of the suspended hatch cover, it is possible that the light was not visible to the stevedore coordinator in the moments leading up to the accident. The suspended hatch cover would also have blocked the C/O's view of the accident location for the last 20 seconds of travel. It is likely that the coordinator climbed quickly on to the hatch coaming while the gantry crane was moving aft, and he "almost certainly" knew that it was in motion, MAIB concluded.

The agency noted several safety deficits in this incident. First, the hatch covers were lifted and carried while stevedores were working directly underneath, an unsafe practice. Second, and critically, there was no lookout assigned to watch the gantry crane operation. Third, "the levels of safety culture demonstrated by the ship’s crew and among the port workers was weak and unsafe acts and conditions were widespread," according to MAIB.

In response, the vessel operator has revised its SMS and now has a standing order requiring a dedicated lookout during crane and gantry operations.

The circumstances of the accident were almost identical to the casualty aboard the freighter Karina C in May 2019. In that incident, the second officer was crushed into a five-inch gap between the moving gantry's access platform and a stack of hatch covers, resulting in serious internal bleeding and death.