The MAIB has released its report on the catastrophic engine fire aboard the freight ro/ro Finlandia Seaways, which seriously injured one crewmember and destroyed the vessel's engine room.

At 2000 hours on April 16, 2018, on a regular crossing from Zeebrugge to Rosyth, the crew aboard Finlandia Seaways noticed powerful vibrations all the way up on the bridge. The third engineer went from the engine control room out into the engine room to investigate, and as the noise and vibration grew louder, he took shelter behind one of the fuel purifiers in the purifier room. There was a loud bang, and flame and smoke came from the engine room door. The main engine had broken a connecting rod, sending several components through the side of the crankcase into the engine room and sparking a fire.

From the heavy vibration, the master realized that something was wrong and ran up to the bridge, taking command. He pulled back the vessel's controllable pitch propeller to zero pitch and sounded the general alarm, calling on the crew to go to muster stations.

Meanwhile, the third engineer was cut off from his main escape route by the fire. He decided to use a secondary escape route at the aft end of the engine room. He ran back aft to a set of three vertical ladders that would take him to safety. At the top of the first ladder, he struggled to get past the chains on the ladder platform rail; he fell back down three times and lost his flashlight. On the next try he made a successful escape.

Once the third engineer had escaped and mustered with his shipmates, the crew reacted quickly and extinguished the fire using the fixed firefighting system. At 2200 hours, an HM Coastguard helicopter rendezvoused with Finlandia Seaways to medevac the third engineer; he was flown to the Norfolk & Norwich hospital and treated for smoke-related injuries to his lungs, eyes and renal system. 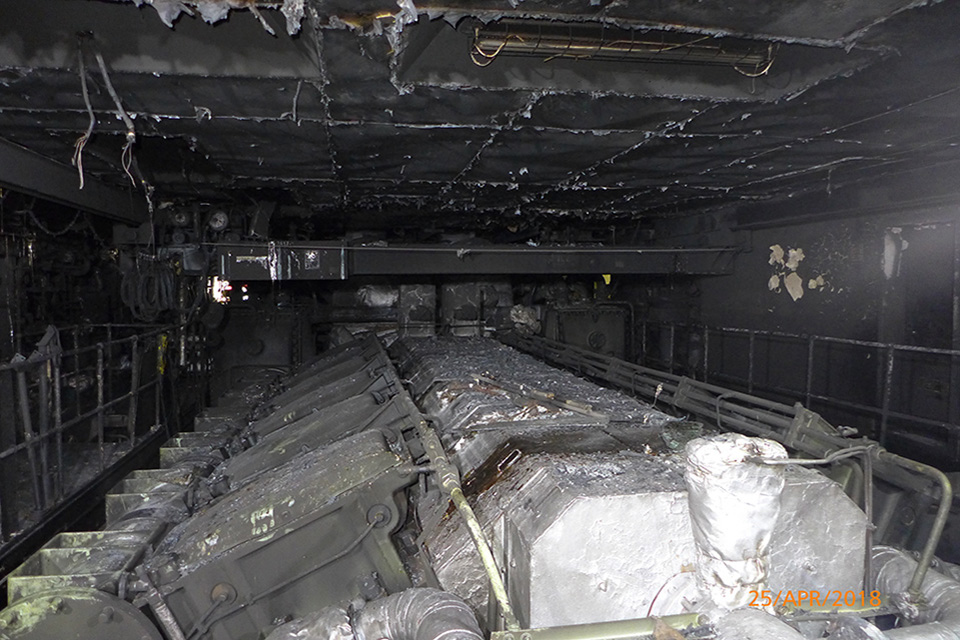 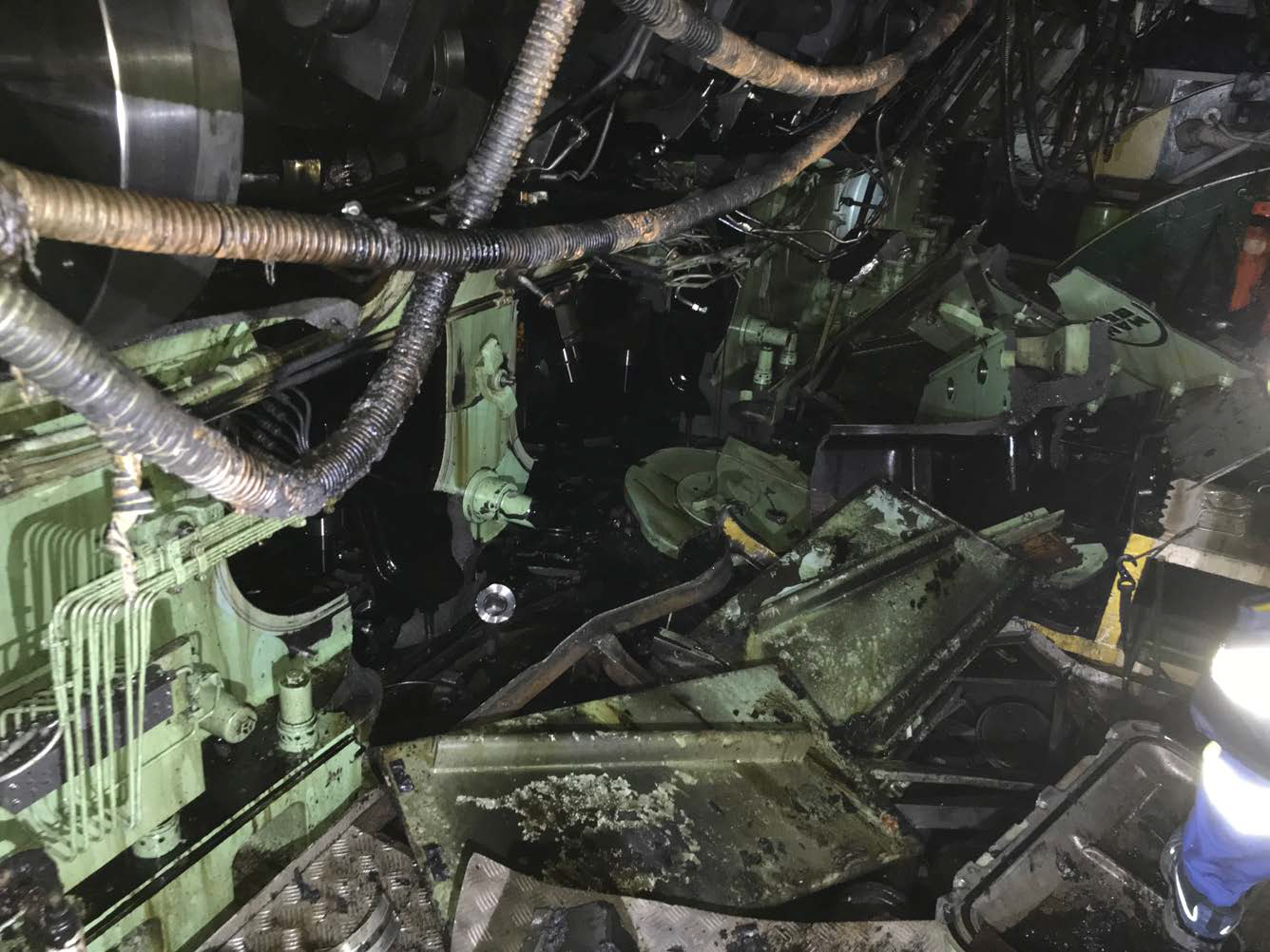 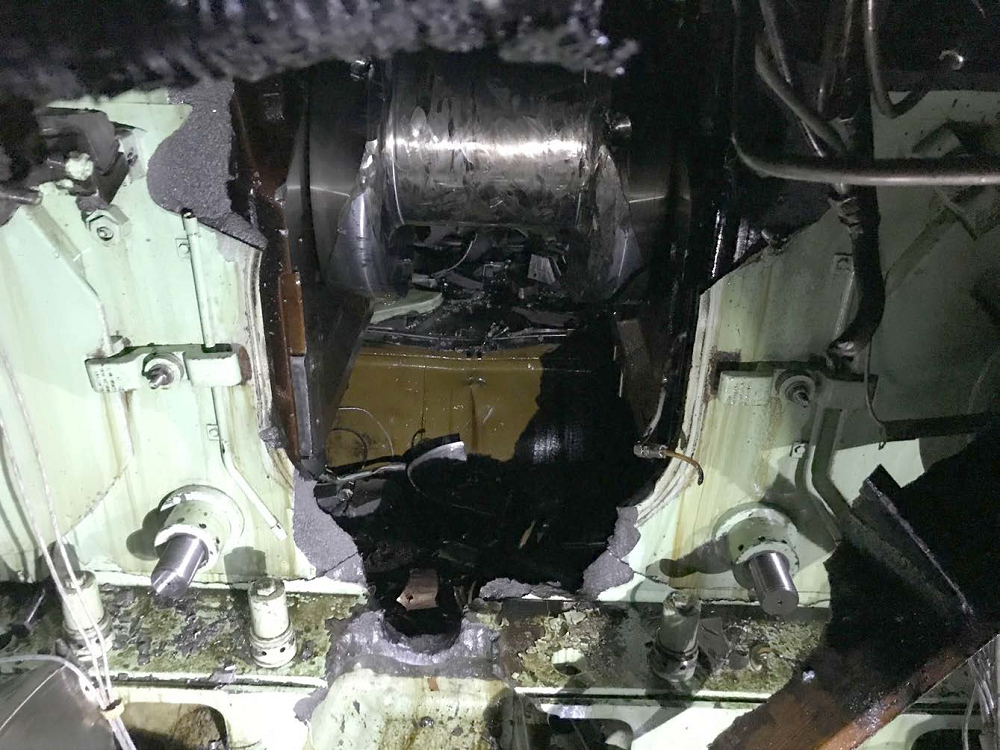 The fire damage was extensive, especially at the tween deck level and the overhead. The engine itself was destroyed: the crankcase was ruptured on the port and starboard sides, with crankcase explosion relief doors and large sections of the casting thrown far across the deckplates. Cylinder A5's connecting rod, along with the lower half of its piston and its crankcase counterweight, had been thrown through the starboard side of the crankcase. Cylinder B5's con rod and piston had also been ejected.

In a forensic investigation, the engine OEM and MAIB found evidence of a fatigue fracture on the A5 con rod small end. The con rod small ends from all the other cylinders were sent to the OEM for inspection, and it was found that seven of them had cuts or notches at the edges or internal faces of the small end eyes. The cuts were "symptomatic of the use of a disc cutter or angle grinder," and may have been created by an improper procedure to remove the bushing in the small end eye.

The Finlandia Seaways' main engine had been serviced by an outside service firm, which had not certified by the engine's manufacturer. Cylinder A5's con rod small end bushing had been replaced in February 2017, but the contractor could not confirm that its technicians had used liquid nitrogen to cool (and shrink) the new bushing before installing it in the small end. An examination of the con rods out of a sister ship that had been serviced by the same shop found similar signs of damage, along with "localized heat marks" on several small end eyes, likely produced by a torch.

"The extent of the damage caused during the piston pin bush overhauls was visually apparent and, therefore, it was obvious that [the contracted] service engineers did not appreciate the potential consequences of the stress [risers] they had introduced," MAIB concluded. "The introduction of notches, probably caused during the bush removal process, introduced stress [risers] into the small end, increased the likelihood of fatigue crack initiation and therefore fatigue failure."