Recycling Technologies of the U.K. has created a low sulfur fuel from residual mixed plastic waste that is not amenable to direct recycling and would otherwise go to landfill. The group claims the fuel is a substitute for fossil based heavy fuel oil and diesel in applications such as power generation and marine propulsion.

In the European Union alone, more than 25 million tons of post-consumer waste plastic is produced each year. Of this, only 26 percent is recycled, with 36 percent going for incineration and the remaining 38 percent contributing to the ever expanding problem of landfill. In addition to the loss of its material value, the carbon cost of processing this mixed waste is considerable, not least due to transportation, as many regions and states export their mixed plastic waste due to a lack of localized processing facilities.

Recycling Technologies has developed a machine and is industrializing a process to convert residual plastic waste into a low sulfur hydrocarbon compound known as Plaxx. This can be used as a petrochemical feedstock, a manufacturing commodity such as paraffin wax or as a clean and more sustainable fuel substitute for fossil-based heavy fuel oil.

Engineering consultancy Ricardo will work with Recycling Technologies to assess the relative performance of Plaxx, heavy fuel oil and diesel when used in an engine of the type and scale typical of power generation or marine propulsion applications.

The Ricardo Atlas II research engine will be used for the testing. This advanced test engine is capable of efficiently evaluating the performance of fuels in large, multi-cylinder engine designs ranging from 150-200 mm bore and representing engines in the class 0.5 to five MW, in a single power cylinder.

Adrian Griffiths, CEO of Recycling Technologies said: “The marine industry is a key market as the use of high sulfur oil is increasingly being restricted. Working together with Ricardo on this project, we are now taking steps to get Plaxx qualified so that it is fit for use in medium and large marine engines. Plaxx is an ultra-low sulfur feedstock and can be adapted for use in any markets where crude oil derivatives are used. Through this pilot project, we hope to qualify Plaxx as meeting the new global MARPOL requirements.” 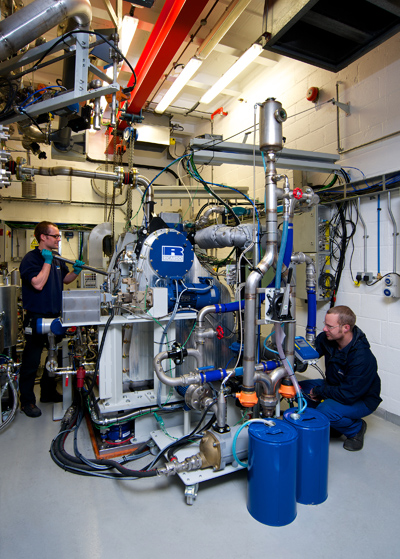