Livestock exporter RETWA, the largest exporter of sheep from Australia to the Middle East, has acted on the industry's transparency commitment and released some animal welfare data from its most recent voyage.

The data has been released prior to the closing of a call for comments by the Australian Department of Agriculture on whether or not to continue a moratorium on the export of sheep from Australia's winter to the Middle East summer next year. RETWA says it fully supported this year's industry-led moratorium for June, July and August.

The company's voyage, loading 54,390 sheep and 467 cattle on the Al Messilah, occurred in the contentious shoulder period of September and October. Sheep panting scores on the voyage ranged from one to three with wet bulb temperatures of 29-33 degrees Celsius at times during the voyage. The most commonly used panting score scale ranges from zero to four, with zero indicating no heat stress and four indicating imminent death. RETWA says the sheep adapted well to voyage conditions and since discharge have acclimatized well in the importing market.

However, in its submission to government late last year, the Australian Veterinary Association (AVA) indicated that panting scores ranging from two to three were a significant concern. The table shows the AVA's view on heat stress threshold (HST) and panting. 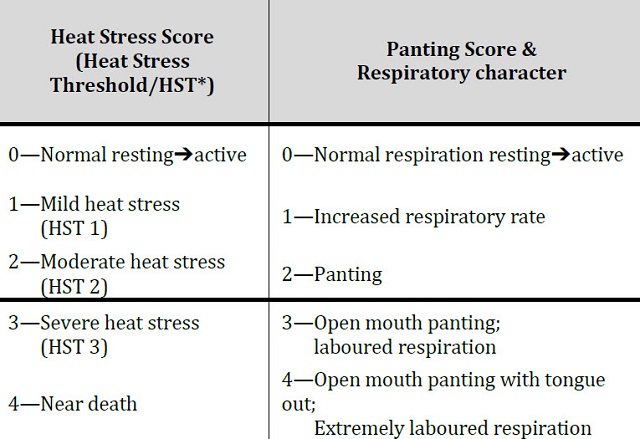 The AVA report stated that: “Sheep should never be exposed to HST 3, even for short periods. Sheep should not be exposed to HST 2 for more than three consecutive days where there is no diurnal variation in temperature. Diurnal variation allows sheep to return to their thermoneutral zone and for respiratory rates to return to resting range at night. Otherwise, sheep can start dying within three days of being exposed to hot, humid weather, as heat load is cumulative. This duration of permissible exposure should be further reduced in the presence of other welfare imposts and/or co-morbidities as these will further reduce the animal’s ability to cope.”

Spokesperson for Vets Against Live Export (VALE) Dr. Sue Foster agrees. “Panting score three is defined as HST 3 - severe heat stress. A panting score of three is usually defined by open mouth panting  and/or labored respiration at a rate of 160–220 breaths per minute. It is accompanied by an increased core temperature due to inability to thermoregulate. For winter acclimatized sheep, a WBT of 29-33 at times during the voyage would certainly be consistent with significant heat stress.

“Whilst heat load (i.e. duration of exposure) cannot be ascertained from the data provided by RETWA, both the AVA and VALE consider that no sheep should ever be exposed at all to HST 3. Panting Score 3 i.e. HST3  is unacceptable animal welfare and highlights why voyages to the Middle East in September and October should not be permitted.”

The debate on exporting sheep from Australia's winter to the Middle East summer flared in 2018 after whistleblower footage was aired on 60 Minutes showing thousands of sheep dying of heat stress on the Awassi Express (subsequently renamed the Anna Marra) and other vessels. Emanuel Exports was the exporter and KLTT/RETWA was the importer for the five voyages that where the subject of the footage.

After the footage was aired, the Australian Department of Agriculture initiated a number of reviews and also insisted the industry extend its 2019 moratorium on sheep exports to the Middle East by three weeks.

According to Foster, the effect of allometric stocking densities has been “nothing short of spectacular with average mortality around 0.23 percent compared to the 0.8 percent considered acceptable for the last 10-15 years.”

During the Al Messilah voyage 0.24 percent of the sheep died (about 130 sheep). RETWA did not give any indication of cause of death. Regardless, Foster says: “The McCarthy Review, the initial review that kicked off all others, said that mortality was not an acceptable indicator and recommended 'that the industry moves away from using mortality as a measure to a focus on measures that reflect the welfare of the animal.'  The original review of the HotStuff model used to calculate heat stress thresholds by Ferguson and others in 2008 said the same: 'Mortality is the ultimate measure of an animal’s welfare (or lack thereof)….consideration should be given to protecting animals that might otherwise suffer severe heat stress but not actually die.'”

Foster agreed: “Mortality is a very crude index of animal welfare. The fact that mortality has plummeted due to the space allocations indicates that many more animals can now survive than previously. It does not mean that those animals did not suffer.”

RETWA is the Australian subsidiary of Livestock Transport and Trading Company which operates in Kuwait as Al Mawashi. The Kuwaiti company shipped a consignment of sheep from South Africa on the Al Shuwaikh in early October, and the issue of animal welfare during live export has now been debated in South Africa. Animal welfare organization NSPCA says that it will be initiating legal action in terms of the Animals Protection Act No 71 of 1962 against the South African Government, including the Provincial Government, in relation to animal cruelty.