Despite recent reports that suggested a decline in incidents of containers falling overboard, there apparently has been another incident this time approaching the Dubai port of Jebel Ali in the United Arab Emirates (UAE).

While the full details of the situation are currently unknown, images have begun to appear of the 3,500 TEU container ship UNI Florida arriving in port with visible signs of container damage. The aft stack of boxes has toppled over leaning over the side of the ship. No reports have been released as of yet on the circumstances of the incident or the number or location of containers lost. 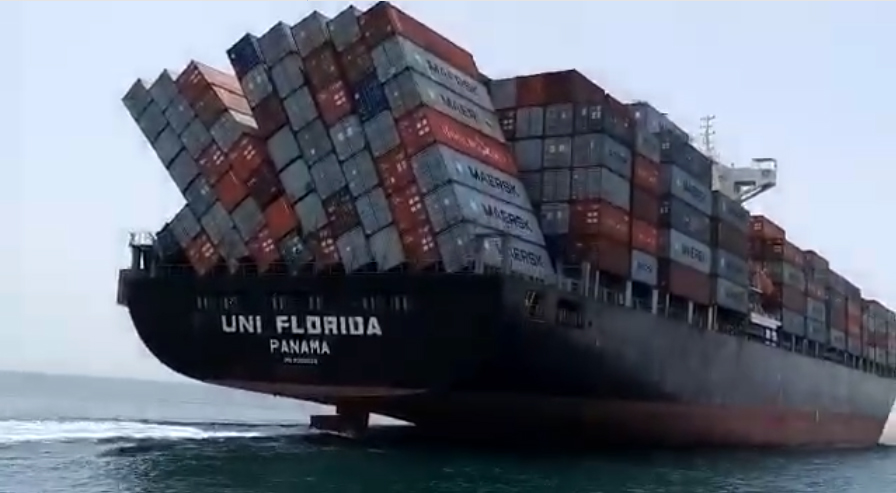 On a video shot by a local observer in the port, you can hear the surprise when they see the stack of boxes toppled over on the stern of the ship. Built in 2007 at the Hyundai Mipo Dockyard, it is apparently not the first instance that this vessel had a container accident in the same aft container bay. Pictures online dated 2007 show the same vessel with its boxes topped to starboard versus the current incident to the port side.

The vessel, the UNI Florida, however, was sold between these two incidents. She is currently owned by the Uni-Asia Group of Hong Kong working on time charters. AIS data indicates that the 43,000 DWT vessel remains in port at the UAE.

Recently, the World Shipping Council (WSC) issued a report saying that the incidents of containers lost overboard has been on the decline and is a small percentage of the total annual volume of containers transported at sea. The WCS concludes, based on data from the past 12 years, that half of all containers lost at sea are attributed to a limited number of major incidents that have occurred during those years. They reported that the number had declined to an average of 779 between 2017 and 2019.

Two and a half weeks ago, the MSC Palak reported that she had lost 22 containers overboard in high seas off the coast of South Africa in Algoa Bay. The South Africa Maritime Safety Authority responded to that incident briefly closing the port over fears that the drifting containers were entering the shipping channel. The vessel was detained for a week in South Africa before it departed. SAMSA reports that MSC supported the clean-up efforts.

While many of the incidents similar to the UNI Florida often go unreported, others had drawn broad attention. In May, the APL England sailing east of Australia lost approximately 50 containers overboard in another heavy weather incident. The Australia authorities briefly detained the ship reporting that their inspectors had determined that the lashing arrangements for cargo were inadequate and found heavy corrosion on the securing points for containers on the ship’s deck. The clean-up from that incident is reported to still be ongoing while Australia has brought charges against the ship’s captain and is pursuing financial compensation from the ship’s owners.

The WCS admitted in its report that the goal should be both to improve incident reporting and seek to further reduce incidents such as these. They outlined a series of actions that were recommended to improve the safety of container ship operations.