Two of the largest cruise ships in the world are beginning their maiden voyages. The introduction of the ships months after they were delivered by their builders comes as the industry looks to complete its restoration, with many companies expecting to have their full fleets back in service by this summer. While maintaining their strict health protocols, including vaccination requirements for passengers and crew, and a decline in COVID cases in many parts of the world, the cruise industry is anticipating approaching pre-pandemic levels of services. The major companies have said that they will be returning to positive cash flow and profitability after more than two years since the pandemic began.

Royal Caribbean International completed preparation and previews for its newest cruise ship, the Wonder of the Seas, which at 236,857 gross tons is the largest cruise ship ever built. She departed this evening, March 4, on her maiden voyage with paying passengers from Port Everglades, Florida. It is more than three months after she left the Chantiers de l’Atlantique shipyard in France and departed from France at the end of January. Assembly of the massive ship took two years at the shipyard in Saint-Nazaire, France and she spent two additional months at Marseille, France receiving her final outfitting. She will be sailing in the Caribbean for a few weeks before repositioning to the Mediterranean for the summer and beginning year-round service from Port Canaveral in November 2022. 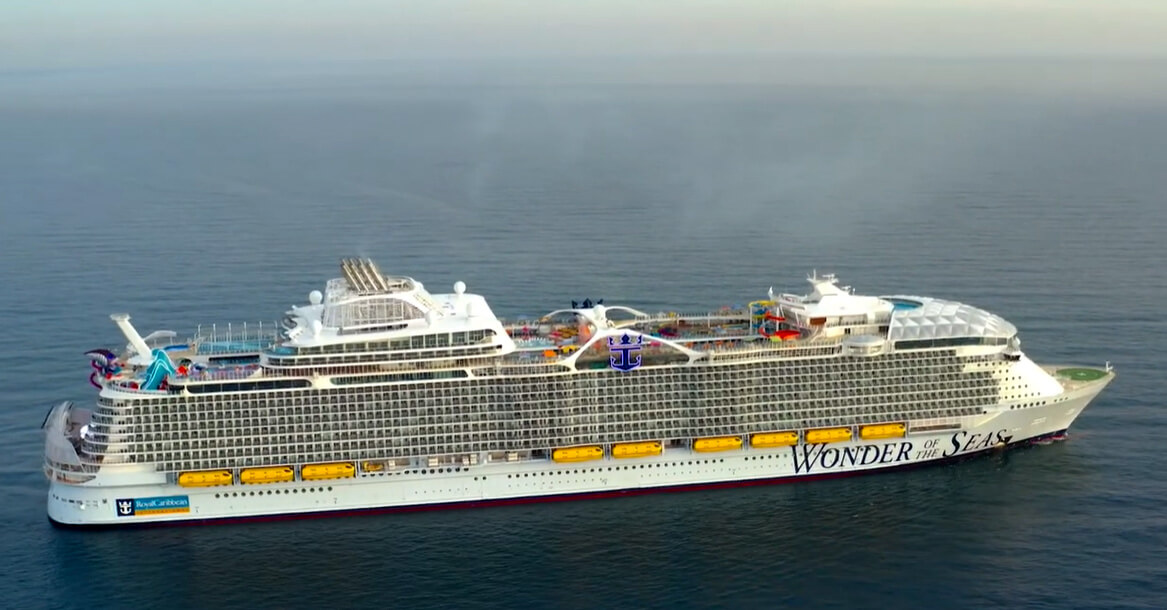 The fifth cruise ship of Royal Caribbean’s Oasis class, the new cruise ship is nearly five percent larger than the Oasis of the Seas that Royal Caribbean introduced more than a decade ago. She is also slightly larger than the fourth ship of the class that was introduced three years ago. The Wonder of the Seas, which is 1,188 feet in length, also has an increased passenger capacity with a maximum of 6,988 passengers in addition to 2,300 crew.

The ship introduces several design changes for the class including the first enclave for suites with a larger, and grander Ultimate Family Suite accommodating up to 10 passengers. The suite neighborhood also has an exclusive restaurant, lounge, and sun deck complete with a plunge pool and bar.  The cruise ship has more than 20 restaurants and bars and amenities including surf simulators, the tallest water slide at sea, zip line, rock climbing walls, and an open-air park with 20,000 plants. 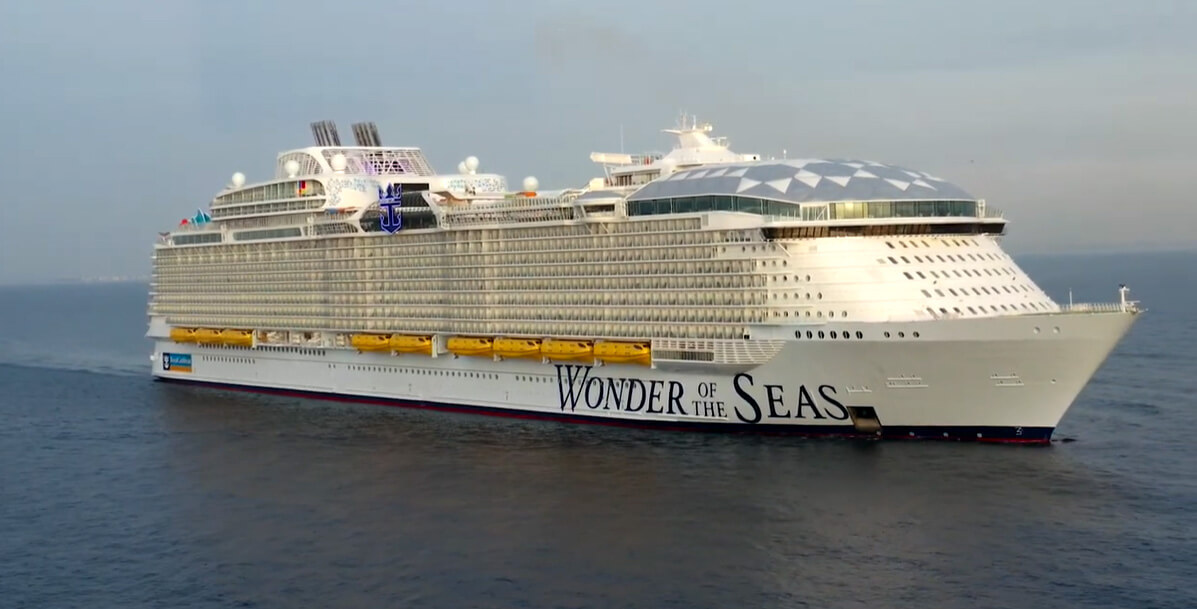 Starting tomorrow, March 5, Costa Cruises introduces its largest cruise ship in the company’s more than 70-year history and the largest cruise ship registered in Italy. It is also the sixth large cruise ship fueled with LNG as part of the industry’s adoption of the alternative fuel. Known as the Costa Toscana, the cruise ship is 185,010 gross tons, making her slightly larger than her sister ship Costa Smeralda.

The Costa Toscana was built by Meyer Turku in Finland and delivered to Costa in December 2021. The cruise line, which is part of Carnival Corporation, highlights that the new ship’s entry into service comes as the cruise line prepares to return all its ships to service during the summer of 2022. After the introduction of the Costa Toscana, Costa has seven more ships that will return to operation. By the summer of 2022, the cruise line will have its entire fleet of 12 ships operating again.

“The departure of Costa Toscana represents a new step in the journey that will bring our fleet back to full capacity this summer,” said Mario Zanetti, President of Costa Cruises. “We are seeing an increasing demand for our cruises. Furthermore, as the general situation improves, we expect a simplification of our enhanced health and safety protocols, based on our ongoing monitoring of the pandemic.  I believe that cruises will soon be back to normal, with new protocols that will allow our guests to fully enjoy the experiences on board and ashore, with the return, for example, of free excursions for guests." 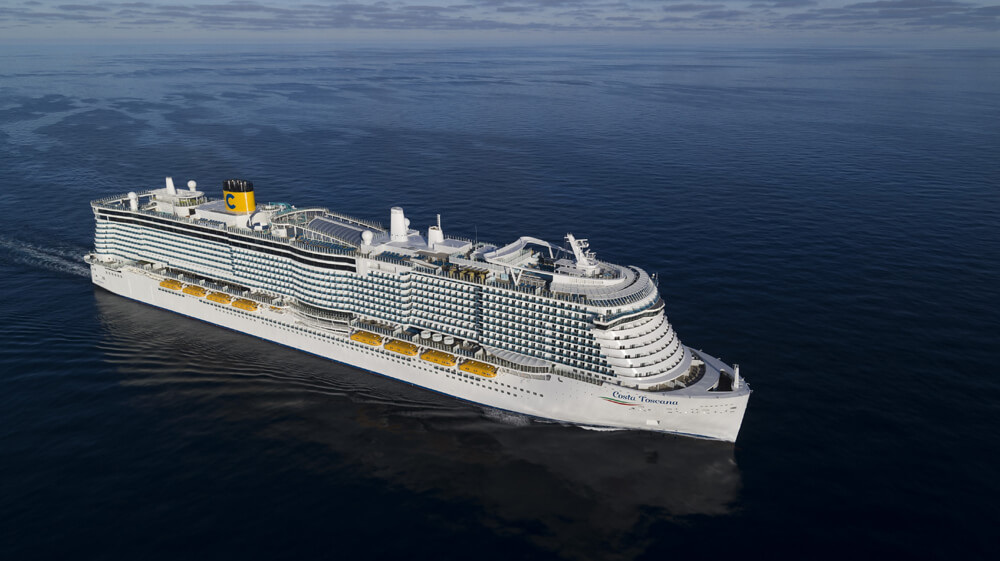 The Costa Toscana sails from Savona, Italy on her maiden cruise to Marseille, Barcelona, Valencia, Palermo, and Civitavecchia. She will continue to sail in the Mediterranean for the summer season. The ship has accommodations for 6,730 passengers and 1,646 in crew. The interior design is called a tribute to Tuscany, including furnishings, lighting, fabrics, and accessories all from leading Italian designers.

The ship also has a series of cutting-edge technological innovations designed to further reduce environmental impact. The daily requirement of water is met through the use of desalinators while the energy consumption is reduced to a minimum with intelligent energy efficiency systems. In addition, 100 percent of separate waste collection and recycling of materials such as plastic, paper, glass, and aluminum will be carried out on board.