With a length of 173.7 meters, a breath of 24 meters and a design displacement of nearly 20,000 tonnes, the future HMCS Protecteur will be the largest naval ship by length ever built in Canada. She will have a cruising speed of 15 knots, a top speed of 20 knots and a range of approximately 10,800 nautical miles. They will have accommodation for 239 personnel.

The future HMCS Protecteur is the first of two joint support ships to be built by Seaspan as part of the National Shipbuilding Strategy (NSS). HMCS Protecteur and HMCS Preserver will replace the former Protecteur-class Auxiliary Oiler Replenishment vessels.

As warships, they will include sophisticated damage control and self-defense systems that will allow them to conduct a full range of military operations in high-threat environments. In addition to providing critical at-sea replenishment, the multi-purpose warships will be capable of seamlessly integrating with any Canadian or allied naval task group and will significantly extend the range and endurance of these groups through the provision of fuel, ammunition, aviation support, food, spare parts, exercise and gym facilities, and medical and dental care.

The vessels will have a covered deck that has capacity for up to 10,000 tonnes of ship fuel, 1,300 tonnes of aviation fuel, 1,100 tonnes of ammunition and 1,000 - 1,500 lane meters of deck space for carrying vehicles and containerized cargo. They will also have a helideck with two landing spots for the CH-148 Cyclone helicopters, hangar space for four helicopters and a roll-on/roll-off deck.

Construction of the early blocks of HMCS Protecteur began in June 2018. Currently 16 blocks are complete and another 37 blocks are under construction. The first “grand block” was assembled in November 2019. A “grand block” is formed when four large ship blocks comprising more than 160 tons of steel are joined together. Three “grand blocks” are currently assembled with the fourth readying for full erection.

The future HMCS Protecteur is scheduled for delivery in 2023. In 2019, Seaspan delivered the Sir John Franklin and the Capt. Jacques Cartier Offshore Fisheries Science Vessels (OFSVs) to the Canadian Coast Guard. These were the first two large vessels built and delivered under the NSS. Seaspan will deliver a third OFSV to the Coast Guard – the future John Cabot in summer 2020. 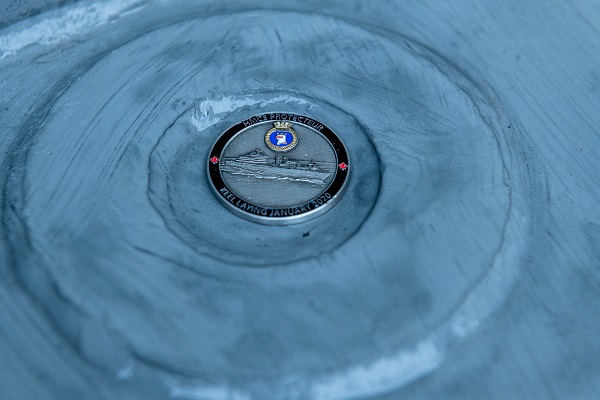