Japan’s K Line working with partners has developed conceptual designs for a new generation of bulk carriers that would minimize emissions while enhancing operational efficiency. The concept uses a core power system enhanced by small-scale electric generation and optional synergistic energy-saving technologies. ClassNK has reviewed the designs and issued Approvals in Principle (AIP) for two sizes of the vessel.

The core power for the vessel is fueled by LNG as the primary source to realize the energy saving and reduced emissions benefits. The design was further enhanced by adopting a permanent magnet shaft generator technology, along with lithium-ion batteries in the core power system. The small-capacity batteries would offer excellent charge and discharge rates being used for auxiliary power during peak hours of onboard demand. They will also be utilized to store surplus electricity.

By adopting the permanent magnet shaft generators, K Line says efficiency is improved by about 10 percent compared to conventional shaft generators. They expect that this system will provide an emissions reduction of about 2.5 to 3.0 percent compared to an LNG-powered vessel without those two technologies. By eliminating the need to operate generators during voyages, the maintenance workload for the ship’s crew would also be significantly reduced along with the associated maintenance costs. 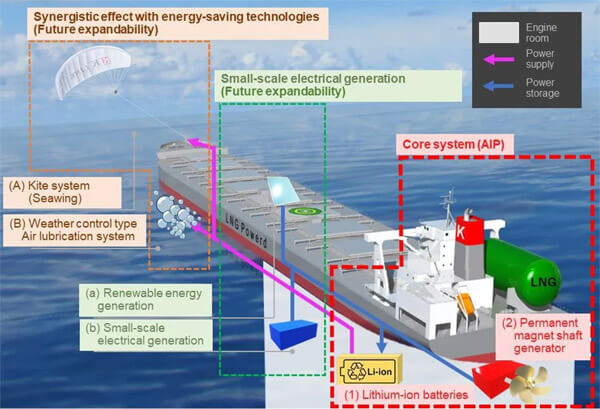 The core system would be supplemented with small-scale electric generation capabilities. For example, they propose to use the latest forms of renewable power generation such as solar on the bulkers. The systems would also capture and recycle waste heat to supplement the power and reduce fuel consumption.

Finally, they propose to incorporate a battery-operated weather-controlled air lubrication system along the hull. The vessel would also incorporate K Line’s design for an auxiliary wind propulsion system. Known as Seawing, it is a kite that would be deployed from the bow of the vessel to supplement propulsion power with wind energy.

The new design expands on a project K Line is participating in to build Japan’s first large LNG-fueled bulkers. In July 2021, JFE Steel announced plans to build and operate two 210,000 dwt vessels due for delivery in 2024 and 2025. The first LNG-fueled bulk carrier will be ordered from the Nihon Shipyard Co. and would be operated by K Line. The companies won support from the Japanese government’s advanced technology program to also incorporate a prototype of the automated kite system to demonstrate supplemental wind propulsion.