The Japanese whaling fleet has returned home after killing 333 minke whales in the Southern Ocean.

Of the 333 whales killed, there were 186 males and 147 females. Just over 50 percent of the females were adult, and preliminary analysis, such as pregnancy rates, suggest healthy fertility of the species, says Japan's Institute of Cetacean Research.

Of the previous season's killing of 333 minke whales, 181 were females, and 122 of these were pregnant.

Japan says the purpose of the five-vessel survey is to improve understanding of the species and regional ecology so that it can calculate capture limits.

The whales were hunted between December 18, 2018 and February 27, 2019, and the survey area was the sea area south of 60 degrees south between 0 degree longitude and 115 degree longitude. 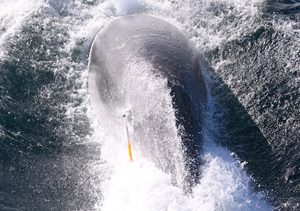 Last year, the Government of Japan left the International Whaling Commission and announced that it will cease whaling in the Southern Ocean after this season. However, Japan will continue with commercial whaling in its coastal waters, joining Norway and Iceland as whaling nations in the North Pacific and the North Atlantic.

A spokesperson for this last Southern Ocean expedition noted: “In this term, I was able to concentrate on the investigation without being disturbed by the anti-whaling organizations.”

The organization did not return for the 2017/2018 whaling operation “because it would be like taking a slingshot to a gunfight in pursuit of whalers who can see us but we can’t see them - in other words, a fruitless waste of time and resources,” said founder Paul Watson.

Noting the 333 whales killed this season, Australian environmentalist Bob Brown said: “It is a tribute to the millions who have backed Sea Shepherd’s courageous peaceful obstruction of the Japanese slaughter of whales in recent years that this needless and illegal slaughter has been brought to an end. Japan’s ongoing whale killing in the North Pacific will now be the focus of global revulsion until that barbaric spectacle is also brought to an end once and for all,” Brown said.

[By M Matheswaran] The Indian military is undergoing what may be its most significant reorganisation since India’s independence, with considerable implications for its future strategic posture. One important issue that has been brought to the fore is the role of the Indian Navy as a regional power projection force built around three aircraft carriers. The government’s decision on this issue will have significant implications for the region. The Indian Navy currently operates one carrier, the 45,000 tonne INS Vikramaditya, with a second, the 37,500 tonne...

In western Nova Scotia, a serious fight is brewing between commercial fishermen and the Sipekne’katik Mi'kmaw First Nation over lobster fishing rights. For the first time in 20 years, Sipekne’katik fishermen have exercised their treaty rights to launch their own "moderate livelihood" lobster fishery during the annual closed season, leaving local commercial fishermen concerned that there will be less left to catch. Last weekend, hundreds of Sipekne’katik lobster pots were removed from the water, and many were deposited outside the...

The LNG carrier Methane Princess was attacked by pirates off Malabo, Equatorial Guinea on Saturday, and one member of her crew was kidnapped. According to Swiss financial news outlet AWP, the attack occurred at a position about 10 nautical miles off Malabo at about 0430 hours Saturday morning. Security consultancy Dryad Global reports that the Methane Princess had just finished loading and was at anchor at the time of the attack, and two Filipino crewmembers who "were on the jetty" were...

The word “disruption” has been used and overused to the point of becoming a cliché, but there's one area of the maritime industry that it seems to have bypassed so far: ship repair. Not anymore. Along with the many disruptions that the COVID-19 pandemic has caused, you can now add new technologies to the list. The virus has forced yards to rethink their operations and interactions. Detyens Shipyards in the U.S., for example, has been operational throughout the pandemic and...