The next-generation Queen Beetle trimaran ferry operated by Japan’s JR Kyushu Jet Ferry embarked on its debut international voyage on November 4, 2022, marking the resumption of passenger services between Japan and South Korea. The opening of the international route was the latest sign of COVID-19 related restrictions being relaxed in Asia.

The high-speed ferry, which was the first of its kind in Japan, was delivered by Australia’s shipbuilder Austal in September 2020. Due to the COVID-19 related restrictions, however, the Queen Beetle had been barred from its intended international service transporting passengers between Fukuoka in southwest Japan and Busan in South Korea. The route had been suspended on March 9, 2020.

The 274-foot high-speed trimaran ferry has only been operating in local waters since its delivery. The ferry was being utilized as a pleasure boat in Fukuoka Bay and between Hakata and Moji in Kita-Kyushu.

JR Kyushu Jet Ferry said it decided to resume operations due to the recent relaxation of border measures. It plans to gradually resume full service on the Fukuoka-Busan route starting this November 4 with a special weekend-only schedule. On its maiden voyage, the Queen Beetle carried 130 passengers.

“As more customers from South Korea are expected to come to Japan for shopping and dining, we’d like to create a timetable that accommodates their needs,” said Masayuki Mizuno, JR Kyushu Jet Ferry President. The JR Kyushu Jet Ferry, a subsidiary of JR Kyushu Group, started the route in 1991 and a total of over 6.5 million people have used the service to date. 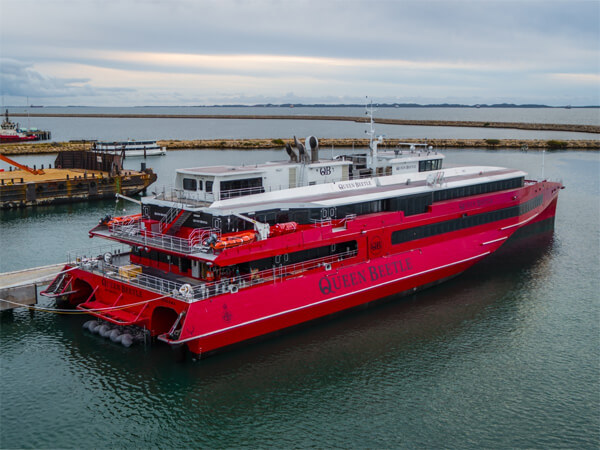 Built by Austal at a cost of $43 million, the trimaran ferry was the first of its kind to be delivered to Japan and is custom-designed to provide an enhanced passenger ferry service. It offers new levels of comfort, luxury, and amenities previously unavailable on Japan’s ferries.

The trimaran hull design allows for a cruising speed of 37 knots. The speed permits it to complete the trip in under four hours.

Featuring a customized interior, the Queen Beetle accommodates up to 502 passengers in two classes of seating plus compartments for groups and families. The ferry features lounges, bars, a kiosk, a retail shop, and a children’s play area. The Queen Beetle also has a café and an outdoor deck for passengers. The vessel operates with a crew of 20.

Both Japan and South Korea have largely removed COVID-19 restrictions with the latter also announcing the normalization and reopening of ports to allow entry and disembarkation of foreign tourists on cruise ships.