Japan’s Seagate Corporation, part of Kawasaki Kisen Kaisha (“K” LINE) announced it is joining the growing number of companies developing electric tugs. The company plans to launch the first battery-power tug in Tokuyama. The vessel will be deployed in the first half of 2025 to reduce greenhouse gas (GHG) emissions in the Tokuyama area.

Japan has been moving forward aggressively with battery power for vessels. The E5 Laboratory has been leading research into battery and electric power developing innovative designs for shipping. Japan’s first large battery-powered vessel, the 492 ton bunker vessel Asahi entered service in April 2022 becoming the world’s first battery-powered bunker tanker. The design was developed in partnership with e5 and Asahi has contracted for the construction of a second electric-powered bunker tanker due to enter service in March 2023. E5 working with Roboship is also developing a similar-sized biomass carrier that will be powered by batteries.

“K” Line provided few details on the design for the tug only saying that it would be powered by a “Hybrid EV system.” The electric motor will be the main source of propulsion, powered by a large capacity lithium-ion battery. The vessel will recharge its batteries with a land-based charging station. 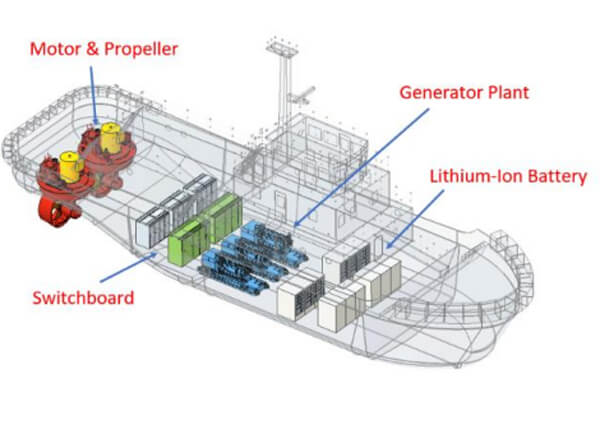 The tugboat, however, will also be equipped with a fuel-powered generator as the auxiliary power source. According to “K Line, it will be possible in the future to achieve zero emissions by replacing the fuel for the generator with zero-emission energy.

The first battery-powered tugs have already entered service demonstrating the potential for electric power. The Zeetug entered service in 2020 drawing its power from two 1,450-kW lithium-ion battery packs supplied by Corvus Energy. For safety, the tug has two redundant battery rooms, one forward and one aft, which are maintained at a constant temperature by an air-cooling system.

Ports of Auckland in New Zealand recently took delivery on its first electric tug which it had ordered from Damen in 2019. Named Sparky the tug is the world's first full-sized all-electric harbor tug. The 25-meter workboat has 70 tonnes of bollard pull - the same as the port's strongest diesel tugboat. China also reported that it put its first electric tug into service in 2021.

Crowley Maritime announced plans a year ago to build and operate the first all-electric harbor tug in the United States. The vessel which is being built for operations in San Diego will have the same pulling capacity as Sparky and will be outfitted with AI autonomous technology for navigational safety. Crowley’s electric tug is due to enter service in mid-2023.