International Response to Fire on VLCC Tanker in the Indian Ocean

An international effort is underway responding to a fire that broke out aboard the VLCC New Diamond located approximately 38 nautical miles off the coast of Sri Lanka in the Indian Ocean. The vessel, which is reported to be carrying 270,000 metric tons of crude oil, equivalent to approximately 2 million barrels, was abandoned with one crew member unaccounted for and another injured while the efforts are ongoing attempting to control the fire.

According to reports from Sri Lanka’s navy and coast guard, a distress signal was received from the vessel after an explosion and subsequent fire broke out in the engine room at around 7:45 a.m. local time. The vessel, registered in Panama and operating under charter to the Indian Oil company, was reported to have a crew of 23 onboard and was sailing fully loaded from Kuwait bound for the oil refinery at the Indian port of Paradip.

A broad range of vessels has been dispatched to the scene including another product tanker the Helen M which is reported to have rescued 19 of the crew members. The Sri Lanka navy vessel Ranarisi reached the disaster scene and also put a rescue team aboard the New Diamond. They rescued the vessel’s third engineer and later transferred him to shore reportedly having suffered burns. The tanker’s captain and one other crew member were rescued separately by the Sri Lana navy ship Sayura. One Filipino crew member is reported missing.

The Indian Coast Guard vessel Shaurya also arrived on scene and began attempting to fight the fire. She was later joined by three vessels from the Indian Navy and supported by aircraft. Sri Lanka has a total of four ships on site, as well as air support, and was also dispatching two tug boats from Hambantota to the tanker. In addition, the Russian Defense Ministry announced that it was diverting two anti-submarine vessels which were also in port in Sri Lanka resupplying before planned military exercises in the area. 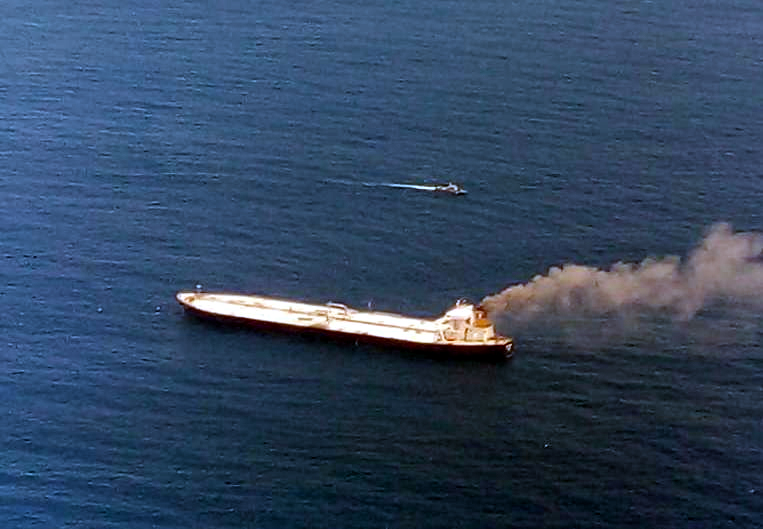 Initial reports said the fire had been contained to the engine room and early pictures only show a trail of smoke emerging from the ship. The Sri Lanka Navy later reported that it believes that the fire had spread confirmed by pictures which show the bridge and accommodation block engulfed in the fire.

The Sri Lanka Marine Environment Protection Authority (MEPA) along with the navy, coast guard, ports authority, and other authorities are all monitoring the situation closely working to prevent an environmental disaster. The MEPA reports a slight trace of oil in the water, but so far, they believe the oil cargo areas have not been breached. In addition to the tanker’s cargo, they are reporting it was carrying 1,700 metric tons of diesel fuel.