In a surprise development, Indonesia reported that the stranded VLCC Young Yong was refloated and moved to an anchorage on November 10. Earlier in the week, the Indonesia Navy had said it could take as long as a month to refloat the vessel while a controversy was brewing over the origin of the oil aboard following the U.S. linking the vessel to efforts to raise money for Iran.

Reports indicated that the salvage operation depended on permission from the United States after the vessel was blacklisted. U.S. authorities said that they would permit the operation due to environmental concerns but not the release of the oil aboard the vessel.

This morning a flotilla of tugs and an anchor handling vessel were observed approaching the 306,000 dwt tanker which is reportedly carrying 284,000 tons of crude. The Indonesia Navy said that a second tanker MT Simba was positioned alongside and that a transfer of oil began this morning. After approximately 44,000 tons of oil had been moved in the ship-to-ship transfer the Young Yong floated free and was moved with the tugboats to the nearby Nipa anchorage. 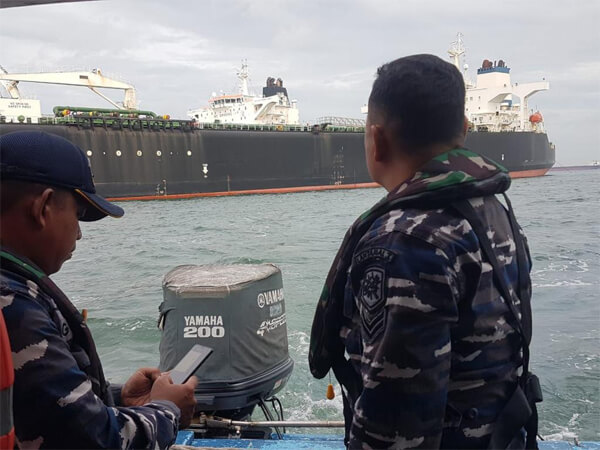 The AIS Signal for the Young Yong shows that the tanker remains in the anchorage with “restricted maneuverability.” The vessel is believed to be undergoing a survey.

The Indonesia Navy reports that it is continuing to survey and monitor the area where the tanker was aground for the past two weeks. It was a sensitive position as the vessel grounded near gas supply lines for Singapore.

Yesterday, reports surfaced contending that the oil aboard the Young Yong originated in Venezuela and had been transferred ship-to-ship as part of a payment scheme for Iranian fuel. The Indonesian authorities are reportedly saying that they will hold the oil transferred from the Young Yong until its origin can be confirmed.