On April 18, the Indian Navy seized over 300 kilograms of narcotics from a fishing boat off India's southern coast. According to the Indian Navy, the value of the seized narcotics is roughly 30 billion rupees ($400 million) on the international market.

While on a surveillance patrol in the Arabian Sea, INS Suvarna intercepted a fishing boat with suspicious movements. The Suvarna’s crew decided to conduct a search operation onboard the ship, which led to the seizure.f

The Indian Navy escorted the boat to a location off the port of Kochi for further investigation.

A Navy spokesperson said, “To investigate the vessel, the ship's team conducted a boarding and search operation which led to the seizure of more than 300 kilograms of narcotics substances.”

Detailing the operation of drug cartels operating in the Indian subcontinent, he added, “This is a major catch, not only in terms of the quantity and the cost but also from the perspective of disruption of the illegal narcotics smuggling routes which emanate from the Makran coast and flow towards Indian, Maldivian and Sri Lankan destinations.”

Drug money channelled from distribution in India, Sri Lanka, and the Maldives is often used for fueling extremism in the Indian subcontinent.

Over the past year, the Indian Coast Guard has seized more than 1.6 tons of narcotics worth approximately $650 million. 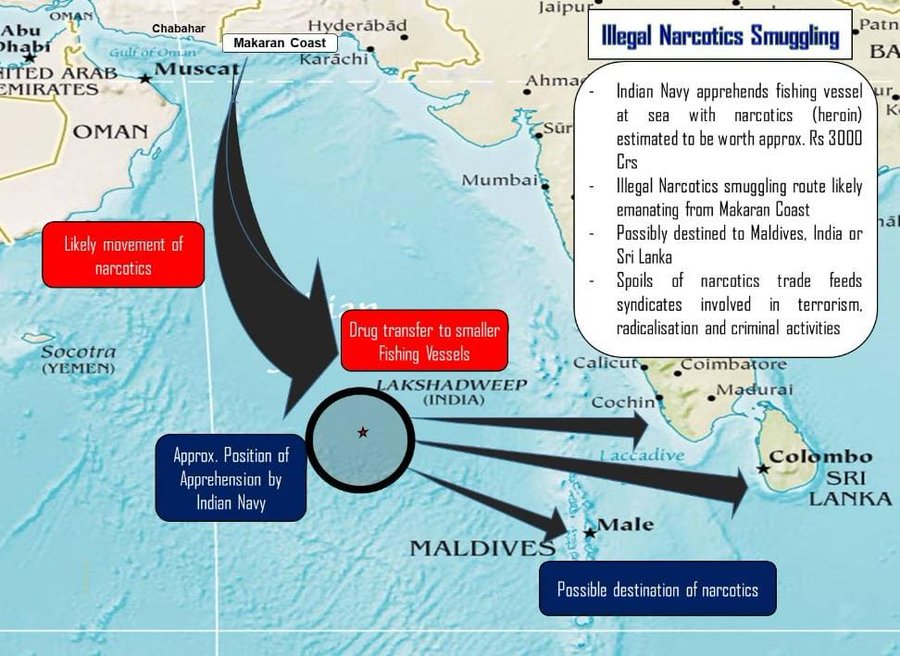